Do I believe in violence?
Voices
7 min read

With 2022 set to be the 'deadliest year' for Palestinians in the West Bank, Mohammed El-Kurd refuses to be forced to justify his people's right to resist Israeli occupation, especially to those who sanction the violence enacted on them. 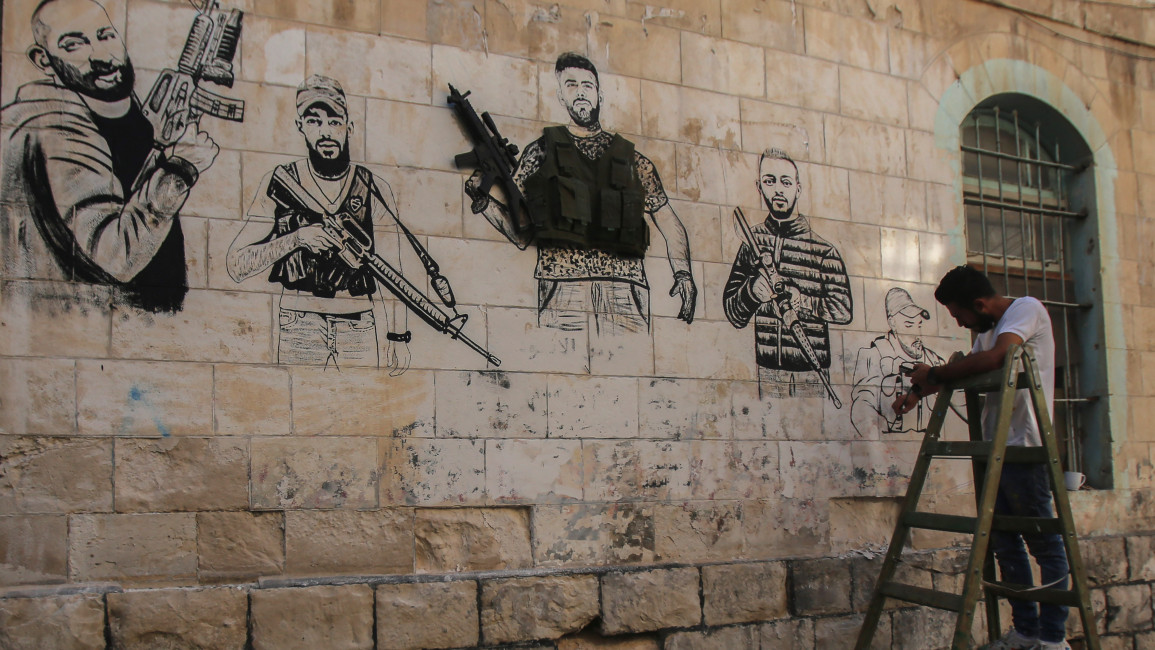 A Palestinian artist paints a mural of five Palestinian resistance fighters who were killed by the Israeli army in the old city of Nablus in the occupied West Bank on 21 August 2022. [Getty]

On the 24th of October, I participated in a talk on Black-Palestinian solidarity at the Harvard Kennedy School alongside Marcus McDonald, the lead organizer of an independent Black Lives Matter chapter in North Carolina.

Unsurprisingly, Zionists were dismayed with the event, citing the malevolence supposedly lurking in my soul and the alleged blood on my hands. They circulated fliers riddled with pseudofacts provided by the Anti-Defamation League, a so called pro-Israeli ‘civil rights’ organisation that I lovingly call the Apartheid Defence League.

A few hours before the event, both Cambridge and Boston police received calls vaguely insinuating a bomb threat, which forced university security to search for explosives.

I wasn't surprised; this wasn't my first rodeo. Someone makes a mysterious claim, another may write in the student paper that my presence directly threatens their life, so the university deploys police and metal detectors.

"At that moment when I heard the news that the six men had been killed, there were two worlds: the world of the brutal military occupation in which these men lived and the world as imagined by the student who asked me the question"

These are, in my opinion, scare tactics meant to stifle Palestine advocacy events or cancel them altogether. In the end, the Kennedy School event wasn’t cancelled, but the attendance of non-Harvard affiliates — a considerable portion of the registrants — was prohibited.

During the Q&A, a student asked the million-dollar question: do I support or was I willing to condemn violence "committed by Palestinian activists"?

As soon as I got off the stage, I learned that, during the event, Israeli soldiers had killed six Palestinian men in a massive raid of the occupied West Bank that left dozens wounded. They were six of 199 Palestinians killed by Israeli forces and settlers this year.

The six slain men were 20-year-old Qusai Tamimi in Nabi Saleh and Hamdi Sbeih Qaim, 30, Ali Antar, 26, Hamdi Sharaf, 35, Mashaal Baghdadi, 27, and Wadee Al-Houh, 31, in the city of Nablus, which has been under siege for weeks.

The emergence of a new armed resistance group in Nablus, the Lions’ Den, marks a revival of the Palestinian anti-colonisation movement by younger generations in which popular support is a vital part of the struggle. Abu-Jildeh examines why ⬇ https://t.co/Eo3vL1aX6i

Al-Houh was a high-ranking official in the recently emerged guerrilla resistance group "the Lions' Den," which has claimed responsibility for various shooting operations targeting Israeli Occupation Forces in the West Bank.

My instinct, as a writer that writes in English, is to offer context explaining why a group of young men would want to take up arms against their occupiers, but the English-speaking world, in recent months, has shown that it doesn’t need context to justify resistance to occupations, so long as the occupiers are not Israeli.

While questioning my sentiment on violence may seem obviously ironic considering, well, the facts on the ground, it is deceptive by design — a glaring red herring. Comical, sometimes. Take for example, former Israeli soldiers who attend my talks to ask moralising questions, having now retired from raiding homes and blindfolding children.

Or when a CNN television reporter, who hilariously happens to be an Afrikaner, asked me whether I "support violent protests" as the network broadcasted video footage of soldiers and armed settlers assaulting my family and neighbours.

At that moment when I heard the news that the six men had been killed, there were two worlds: the world of the brutal military occupation in which these men lived and the world as imagined by the student who asked me the question.

But that student, that TV anchor, and diplomats and observers everywhere are not only unconcerned with the root cause for our rebellions, having stared down the barrel for over seven decades, they are also more often than not unfazed by the violence inflicted on us. Our death in their eyes is mundane, banal, and business as usual, sanctioned by heroes in uniform happily following orders. At the very best, killing us is a necessary evil.

But even if they didn’t kill us, the occupation is still violent. What if the Zionist regime didn't routinely bombard the Gaza Strip? Would that make keeping millions in an open-air prison somehow peaceful? Is bloodshed the only indicator of violence?

What about the Palestinians who live near the ocean but can never visit it? What should they do about the torment of its salty humidity visiting their kitchens in the summer, the old photographs of their grandparents' houses that still stand on the shore?  In what world is resisting this deprivation condemnable?

"Yet somehow, those who clutch their pearls at resistance praise it when white people commit it or, more accurately, when it is carried out by people who aren't enemies of their biggest ally and who don’t threaten their regional interests"

I prefer to focus on reporting Zionist brutality rather than addressing smear campaigns or harassment and death threats. These distractions inevitably pale in comparison to the repression, the systemic and tangible repression, visited upon Palestinians on the ground.

But that repression on the ground is precisely why I must address the ridiculous predicament ensnaring advocates for Palestinian liberation in the Western world.

Today in the United States, Palestinian political activism and national sentiment alike are so censored that activists find themselves fighting baseless accusations instead of organising. Salaried adults at major Zionist institutions go after university students with smear campaigns to discourage them from participating in advocacy, sometimes threatening their career and academic prospects.

The former Director General of the Israeli Ministry of Strategic Affairs (now part of the Foreign Affairs Ministry) called it “waging a holistic campaign against the other side. Take him out of his comfort zone. Make him be on the defensive.” They turn us into criminals of thought, guilty of our rage and grudges, of our natural responses to brutalisation — cornered and put on trial.

Armed resistance is trendy in Ukraine but not the rest

Yet somehow, those who clutch their pearls at resistance praise it when white people commit it or, more accurately, when it is carried out by people who aren't enemies of their biggest ally and who don’t threaten their regional interests.

In recent months, a New York Post headline praised a "heroic" Ukrainian suicide bomber. A psychologist interviewed by New York Times described "anger and hate" in the context of occupation as "a normal reaction and important to validate," stating that such hate should be "channelled into something useful," like "making incendiary bombs."

In the mainstream American mind, violence seems to be an incessantly mutating concept. It is normalised when it is state-sanctioned, formalised, and done by men and women in uniform. Shoot-to-kill policies, administrative detention without charge or trial, and land theft are often legal and always done according to protocol.

Military barriers, colour-coded legal statuses, and cement walls splitting families apart are excusable. The list goes on. Not only are there justifications for all of it, but there's $3.8 billion of taxpayer money sponsoring it every year.

"Those resisting, those born and raised in violence, do not require the approval of Ivy League students or corporate television anchors who routinely turn a blind eye to the decades of debilitating, systematic, and material violence of the Israeli regime"

So I am not going to try to convince anyone of our right to resist. I won’t cite international law. I’m not going to invoke Malcom X or Assata Shakur. Not even Martin Luther King’s justification for riots. I will not joke about the moral sensibilities of the people that have invented “Stand Your Ground” laws. Because you don’t have to look far to see that they can understand that those who are stricken will strike back.

Those resisting, those born and raised in violence, do not require the approval of Ivy League students or corporate television anchors who routinely turn a blind eye to the decades of debilitating, systematic, and material violence of the Israeli regime.

Mohammed El-Kurd is an internationally touring and award-winning poet, writer, journalist, and organiser from Jerusalem, occupied Palestine, and the cofounder of the #SaveSheikhJarrah movement. He is the author of RIFQA.