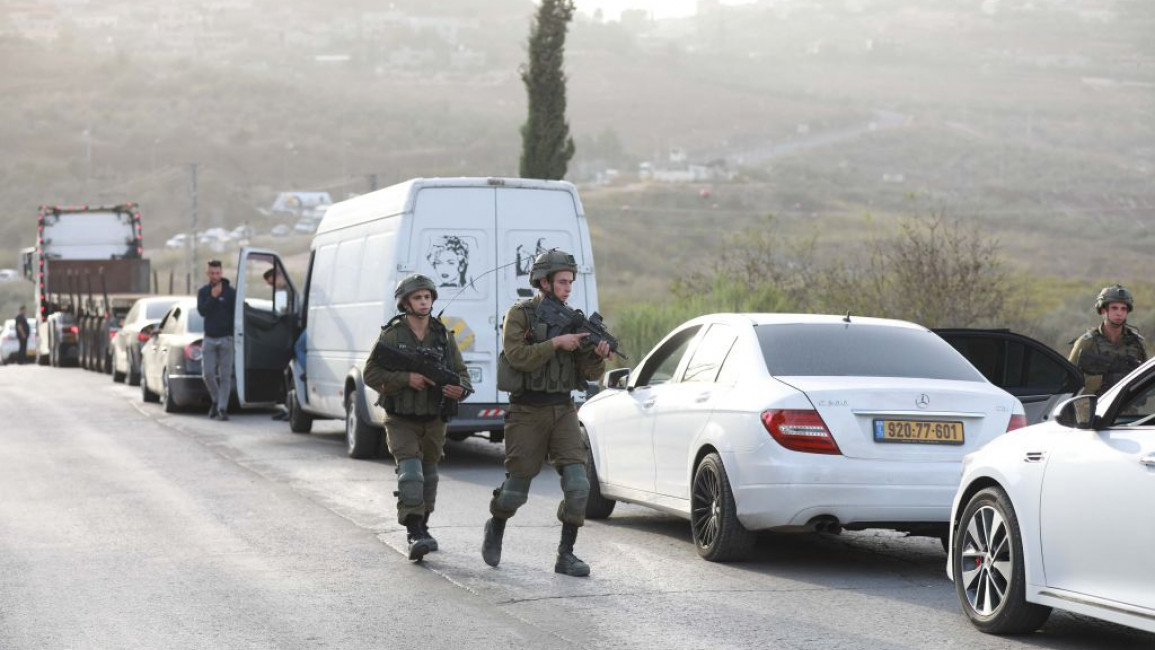 With customers unable to reach his shop for the past two weeks because of an Israeli-enforced siege, Abdelaziz al-Qadi's small convenience store in the West Bank city of Nablus has been left dark.

Wasting money on electricity is pointless, he explained, when Israeli forces are ensuring no traffic can pass his door.

On a normal day "there is not a single place to park" outside his shop, Qadi told AFP.

Israel's sweeping closure of Nablus has restricted travel in and out of the northern West Bank city for some 200,000 Palestinians.

Military raids inside the old city have intensified as Israel pursues an emerging resistance group called "The Lions' Den", which has claimed a series of recent attacks, including the killing of an Israeli soldier in the nearby settlement of Shavei Shomron on October 11.

The group emerged in recent months as Israel killed scores of Palestinians in deadly raids in the West Bank since March.

Five Palestinians were killed in Nablus on Tuesday in a massive Israeli operation that Prime Minister Yair Lapid said led to the death of Lions' Den leader Wadih al-Houh.

Tensions remain high and the threat of another Israeli raid is persistent.

Now a large mound of earth blocks the road leading to Qadi's shop while, on the other side, three Israeli soldiers stand guard.

Qadi estimates that Israel's crackdown on the group is costing him around 1,500 Israeli shekels ($430) per day, while all neighbouring restaurant have closed.

"Rubbish, rubbish, rubbish," he sighed as he sorted through piles of expired produce. Three of the store's four fridges are unplugged, saving him the 60-70 shekels in daily electricity costs.

"Obviously I'm upset, I'm paying the price for this situation," he told AFP.

But he added that the "Palestinian resistance has the right to fight against the occupation".

The Lions' Den is a loose coalition of fighters that is unaligned with more established Palestinian factions.

Late leader Ibrahim al-Nabulsi, nicknamed "The Lion of Nablus", was known for galvanising the youth before he was shot dead by Israeli forces in August.

He has since become a folk hero to Palestinians on social media.

On Wednesday, Nablus mayor Sami Hijawi denounced the siege on his city disrupting daily life, the local economy and access to medical care and education.

How Nablus became the heart of the Palestinian struggle

For some, the recent weeks have bought back memories of the Second Intifada, or uprising, which took place from 2000 to 2005. Israel brutally suppressed the uprising against its occupation of the West Bank and a 100-day curfew was imposed on Nablus at the time.

Yet for Tayel al-Hawari of the local chamber of commerce, today "the situation is worse".

"At the time, there were alternative routes, but today even the small roads through the villages are closed," he told AFP.

The city, which is one of the West Bank's economic hubs, is exporting just 20 percent of its regular output, Hawari said.

The normally clogged streets are deserted while the prestigious Al Najah University has told its 25,000 students to study remotely.

At the city's western gates, hundreds of vehicles queued at a military checkpoint.

For Mohammad Marei, the checkpoints "are a kind of humiliation or torture", he said as he waited to pass through on his way to cultivate olive trees at his nearby farm.

"It's just a collective punishment," he said.

The Israeli army claims the blockades and inspections are "due to the recent rise in terrorism within the city".

The military "exhausts all means at its disposal to maintain the security of the civilians of the area and works to maintain their normal life routines," it said in a statement to AFP, adding that the "closure" of Nablus would end depending on "strategic assessments".

Nablus is under siege. For 9 days, Israel has locked down the entire district, one of the most populous areas of the West Bank. Checkpoints, road closures, traffic jams that span for miles. Ppl can’t get to school, work, or hospitals. Collective punishment on an entire population https://t.co/uvqPvqKAus

With the blockade in its third week, 44-year-old teacher Sadyya Khatib said she was searching for answers to give her four-year-old daughter.

"She asks, why they are shouting, bombing like this?"

"I don't know how to explain," she told AFP.

Khatib had been waiting two hours at a checkpoint for a journey that usually takes just 20 minutes.

In front of her, Israeli soldiers peered into vehicles and checked paperwork, assault rifles in hand.

Khatib voiced anger at being made to suffer for an Israeli operation against a fighting group.

"It's not our business, we are teachers," she said.