From Fatima Bernawi to Nelson Mandela: The extensive history of Black and Palestinian solidarity

From Fatima Bernawi to Nelson Mandela: The extensive history of Black and Palestinian solidarity
In Brief
6 min read

A transnational relationship built on anti-imperialism, anti-racism, and intercommunalism, the Black and Palestinian struggles share an interwoven history. As BLM and Palestinian protests gain momentum, Bashirat Olade elaborates on their alliance. 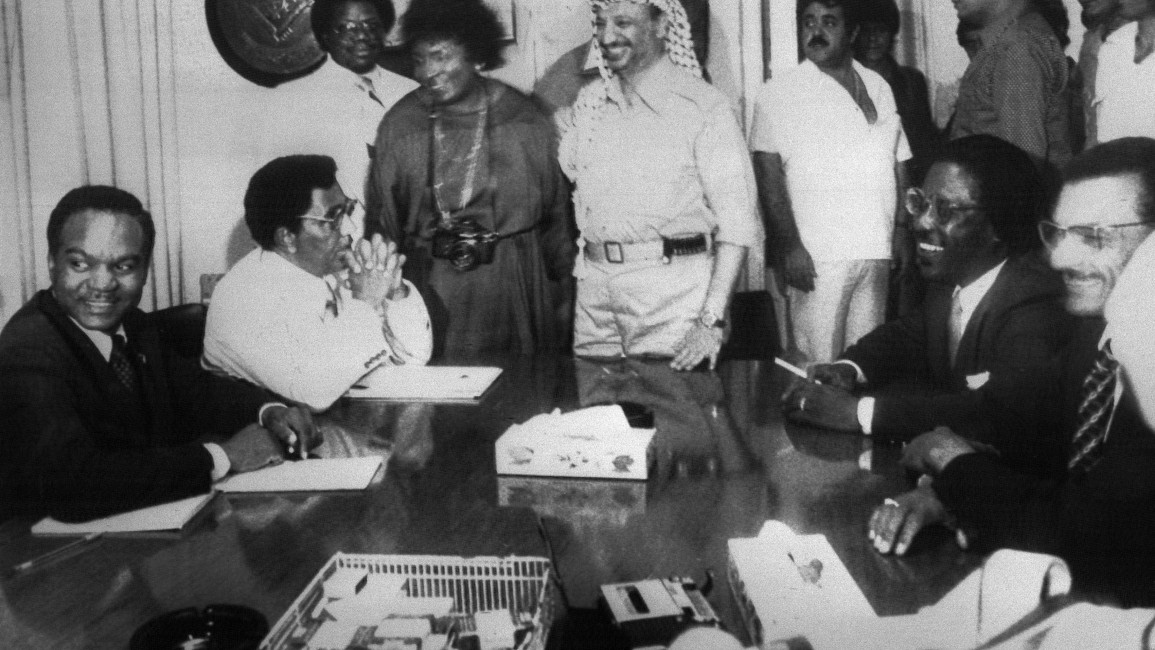 Last summer, we saw extensive support for the Black Lives Matter movement worldwide from London, Jerusalem, Paris, Lagos and more. Now, we are seeing protests across the world in support of the Free Palestine movement across the world, with thousands tuning in daily and standing in solidarity with Palestinians under occupation.

Whilst it’s important to note that the Israeli forces train US police officers and undertake similar surveillance mechanisms, it reminds us that the Free Palestine movement and the Black Lives Matter movement – both equally important – are movements of the same ilk.

Both are against white supremacy, racism and Zionism. Not only is this crucial to remember, but the same danger that’s inflicted on Black people in the US and other Western countries is inflicted upon Palestinians. Reflecting on the intersection of both movements remind us that our solidarity must not be transactional, but internationalist.

It’s been said multiple times on social media that the Palestinian movement isn’t a Muslim cause – true. Whilst this isn’t inherently false, the Western associations with Arab people and by extension, Palestinians are often assumed to be Muslim when this isn’t the case. Palestinians from Christian, Jewish, Druze backgrounds are also impacted by the occupation. However, the way it manifests in online discussions and by extension, real life, has elements of Islamophobia, with some not supporting it as they think it’s a Muslim cause.

"For those everywhere struggling against racism and for freedom, the Palestinian people continue to serve as an inspiration because they have endured and remained steadfast for so long" - Angela Davis

Despite this, noting that Palestine isn’t a Muslim issue “denies the Islamophobic lobbying that facilitates these tactics and has been to vilify Palestinians as jihadis. Yes, even Christians can be subject to Islamophobia.”

Pitting movements against each other such as END SARS, Free Palestine or Black Lives Matter serves no purpose when in reality, those who are directly impacted by these movements are still at risk of harm, brutality and all sorts.

Whether these forces are domestic or international, it speaks to a greater issue at hand. For instance, Western powers are complicit in the Palestinian struggle from funding billions in military equipment with taxpayers’ money or how British universities, unfortunately, contribute to the brutality Palestinians experience.

Beyond the Anglophone-speaking world, we are seeing leaders such as Sylvana Simons, a Black feminist politician, shaking up the Dutch Parliament in support of Palestine and anti-racism. Following the recent surge in social media activism and support, coupled with multiple protests, there’s been some commentary about Black support for Palestine, conversations of anti-blackness and essentially, instances of transactional solidarity, which should never be the case.

Using the Black Lives Matter movement as a ‘gotcha’ moment shows that some people never really cared about the Palestinian struggle. Likewise, disregarding the Palestinian liberation movement out of spite of a non-Black person’s annoying comment also showcases the support was always conditional.

With that, it’s crucial to be educated on the history of Black and Palestinian solidarity, instead of spewing anti-black hatred or ignorant statements concerning the Palestinian liberation movement.

Just like the Palestinians, South Africans went through apartheid under the country’s white minority government from 1948 until 1994. The former South African leader, Nelson Mandela, reaffirmed his support for the Palestinian people, reminding people that “we know too well that our freedom is incomplete without the freedom of the Palestinians.”

Where black and Palestinian lives meet (Part I)

Nakba Day recently passed on May 15, but the events that occurred at al-Aqsa mosque, Sheikh Jarrah and multiple tragedies remind us that the Nakba really has not ended. Palestinians are still suffering from state-sanctioned terror. In 1948, over 700,000 Palestinians fled or were expelled from their homes – which was the same year the white South African government (National Party) was elected, institutionalising racial segregation and apartheid.

Longtime radicals and revolutionaries such as Angela Davis have been supporting Palestine, mentioning the linked struggle and the alliance between Black people and Palestinians. As great as this is, even if there were no alliances between Black people and Palestinians, humanity shouldn’t be transactional. In a discussion with DemocracyNow, Davis noted  “Palestinian activists have long supported the Black people’s struggle against racism” and mentioned that when she was in jail, solidarity was a major source of courage for her.

While we cannot literally compare the dynamics of the movements and how militarism affects Palestinians, we can spot parallels between movements. After the murder of Michael Brown in 2014, Palestinians were tweeting in solidarity and sharing tips and tricks with protesters in Ferguson on how to deal with tear gas. While in occupation, Palestinians still showed up for Black Lives Matter with murals of George Floyd too. The solidarity has always been there.

“But Afro-Palestinians exist?!” True, but they tend to almost always get brought up when it comes to discussing anti-Blackness. Although this is valid, it appears that some people will bring up Afro-Palestinians to invalidate a struggle that they probably wouldn’t be in solidarity with.

Unapologetic Burkinabé leader Thomas Sankara spoke before the United Nations in 1984 and advocated for Palestinians in his speech. Recognising the importance of supporting the oppressed, Sankara, like many other Black leaders were on the side of the Palestinians. It’s important to note that many African nations began to gain independence in the late 50s, 60s and 70s by their former colonizers and recognised the parallels between themselves and the Palestinians.

With that, many Afro-Palestinians are descendants of Muslims from Nigeria, Mali, Senegal that resided in Jerusalem for religious reasons or descendants of those who fought with Arabs in the 1948 war and other rebellions.

Afro-Palestinians have been at the forefront of the movement with Fatima Bernawi, an Afro-Palestinian of Nigerian descendent being the first female Palestinian political prisoner. She planted a bomb in a cinema in Jerusalem in protest of a film that was a celebration of the 1967 Israeli-Palestinian war.

In the words of Angela Davis, “for those everywhere struggling against racism and for freedom, the Palestinian people continue to serve as an inspiration because they have endured and remained steadfast for so long, refusing to give up and accept permanent subjugation and injustice.” So, let’s never forget about their plight and continue to support them.

Bashirat Oladele is a freelance writer focusing on politics, entertainment and pop culture. For more of her writing, check out her portfolio.