Rayan Suleiman and growing up in occupied Palestine

Personal stories: Following the death of Rayan Suleiman, whose heart stopped after being chased by Israeli soldiers, Emad Moussa, reflects on his own childhood during the first intifada. Now a father, he feels nothing has changed for Palestinians. 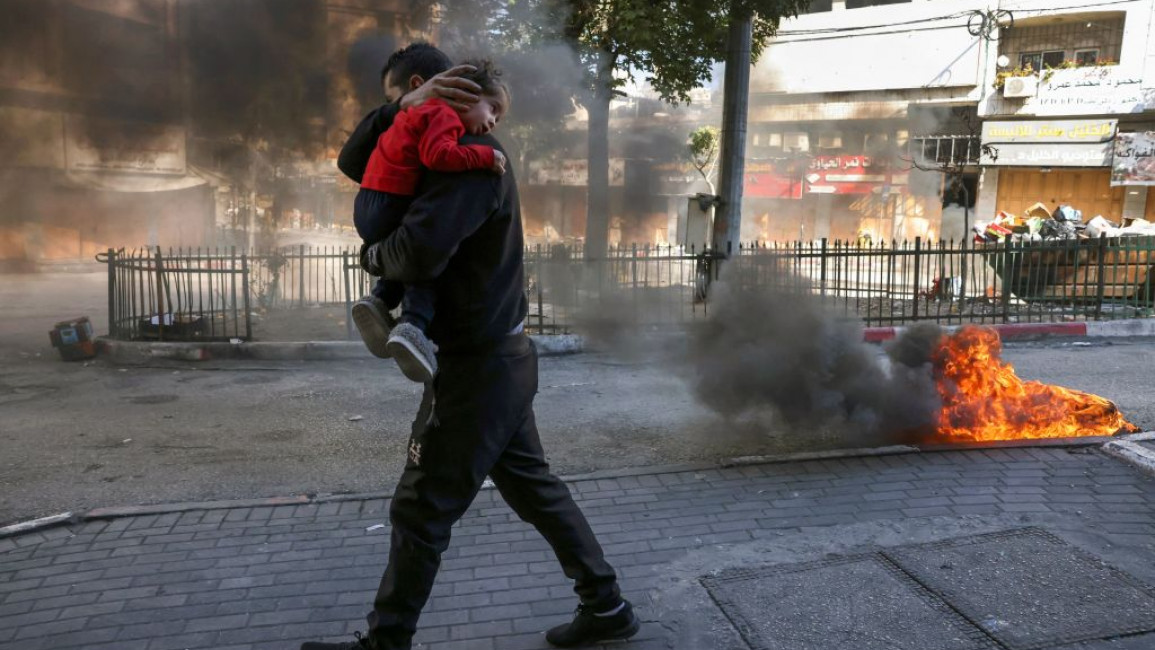 A Palestinian man carrying a child walks past burning tyres during clashes between protesters and Israeli security forces, near the checkpoint in the center of Hebron city in the occupied West Bank, on 11 November, 2022. [GETTY]

Walking to and from school is a relatively eventless activity for children across the globe. In occupied Palestine, this concept of normality does not apply.

On his way back from school, seven-year-old Rayan Suleiman from occupied Bethlehem  encountered an Israeli patrol. Accusing him and his brother of throwing stones at the soldiers, the encounter quickly turned into a chase. The two boys managed to get home and hide, only to be followed by the soldiers who angrily yelled and banged on the door, threatening to arrest them.

Moments later, scared and exhausted, Rayan was a lifeless body.

The Israeli authorities were quick to deny any violent interaction with Rayan and his family. They said an officer went to the family’s home and spoke to the father calmly after spotting the children throwing stones at the soldiers.

The otherwise healthy child was exposed to extreme stress, which caused his heart to fail, the doctors reported.

''The raids became a routine so much that my grandmother rearranged the house in such a way as to be “sorted out” quickly after the soldiers had turned it upside down. She occasionally hung the Palestinian kuffiyeh on the wall near the door in defiant anticipation of the next raid, much to the protest of my grandfather and uncles who thought it was a security risk. “They’re after my children, it cannot get any worse,” she would say.''

Whether or not the Israeli army were directly involved in, effectively, scaring the little boy to death, is a sheer technicality. What happened was more of a vista into the brutalised reality of Palestinians under Israel’s occupation, especially for the children.

Rayan’s story, albeit extreme and tragic, remains one of many representations of what growing up in Palestine is like.

Across three generations, nearly all of those who were born in Palestine opened their eyes to a distorted reality defined by violence and restrictions. As young children, we assumed it was normal; and we had no parallels to compare our lives to. Our world was simple: soldiers and non-soldiers, dominators and dominated, a social order devoid of any complex politicisation.

With increased exposure to the occupation, however, our unscrutinised acceptance began to wear off. What set in instead was fear, anger, and festering resentment.

For my generation, we grew up during the first Intifada witnessing the clashes, the arrests, the shooting, the killing, and the curfews. Anxious families tried fruitlessly to tuck their children away from the situation, but could not stop it from knocking on their doors.

In my family home, similar to the majority of our neighbours, not a week went by without the soldiers “paying us a visit” looking for “troublemakers.” In our case, it was my uncles. My grandfather would rush to help his sons climb the wall at the back of the house so they can hide at the neighbour’s. The soldiers typically gathered all of us in one corner of the house as they searched every room, never mind the children in the background screaming and clinging to their mothers’ clothes in fear.

The raids became a routine so much that my grandmother rearranged the house in such a way as to be “sorted out” quickly after the soldiers had turned it upside down. She occasionally hung the Palestinian kuffiyeh on the wall near the door in defiant anticipation of the next raid, much to the protest of my grandfather and uncles who thought it was a security risk. “They’re after my children, it cannot get any worse,” she would say.

Of those traumatising moments, what resonated the most was the horrifying realisation that our parents - our protectors - could not shield us from the situation. For a child, this is a critical moment of departure from innocence.

During the home raids, most parents refrained from challenging or aggravating the soldiers in fear for their children’s wellbeing and own safety. We the children, however, did not understand the intricacies that forced our parents to act the way they did. Their passiveness, to us, implied weakness. And because of that, many of us could not but internalise disappointment and resentment towards them, which later expressed itself through rebelliousness.

This was visible among boys, who struggled to see their fathers - the “powerful masculine protectors” - being emasculated and humiliated by the occupying forces. Among my peers, animal abuse and physical aggressiveness toward other children were symptoms of that brutalised reality. Vandalism of public facilities was another.

At school, children assumed a more proactive role. Many as young as seven formed groups under the flag of anti-occupation activities, without basic understanding of the volatility of the situation. We saw our activities as heroic and dutiful. We clashed with the occupation troops, threw stones at them, and participated in tyre burning and wall graffiti. We even developed methods to avoid injury and arrest.

Those of us who were caught were subjected to physical abuse and intimidation. Some were only released after the parents had paid a hefty sum of money to the occupation authorities. The practice, becoming common toward the end of the Intifada, was designed to scare parents into imposing further restrictions on their children. As if that were possible, considering that the “rule makers” were the danger and the ones who stripped the parents of the ability to contain, let alone protect, their children from that danger.

But in retrospect, much of what we did was seemingly a maladaptive strategy to cope with the uncertainties and depravity imposed by the occupation on us. Acting out our parents’ anxiety was another reason. Albeit, for some of us, it was a way to compensate for what we thought was parental passiveness.

With our generation as it is with Rayan’s, many children who escaped physical injury or even death, were left psychologically stunned. Most of my generation would say we missed out on our childhood, and today the story is repeated almost identically.

It is surreal to think that at one point, nearly every one of us was the terrified child, a little Rayan. And today, we are the anxious parents trying to shield our kids from the same horrors we were exposed to.

What we have now, as a result, is three generations’ worth of mental health problems, anger, and despair. For the last seven decades, Palestinians have had no sabbatical from persecution to break free from the trauma.

Mahmoud Abbas, despite all of his flaws, spoke of exactly that when in an undiplomatic moment he lashed out at Israel, saying: “get off our chests.” It was perhaps one of the rare times when the Palestinian leader was representative of his people.

Yet for our oppressors, our trauma-stricken children are only victims to our incitement. We teach our children to hate, they say. Not only do they condemn our resistance to their injustice, but also expect us to have no negative emotions toward that injustice. How dare we hate our oppressors!

The fact remains, Rayan was chased to death by armed soldiers, while most of his peers, across three generations, have been chased out of normality and safety. As Rayan’s family and friends will not forget the perpetrators, Palestinian children will continue to not look kindly on those who stole their childhood.

One needs not an inciter, nor is it odd, to resent those who point a gun to one’s head. What would be odd, is a different reaction.