After Ye's Antisemitic comments, Hadar Cohen warns against the weaponisation of Antisemitism, and argues that the struggles for true liberation for Jews and Palestinians are intertwined. 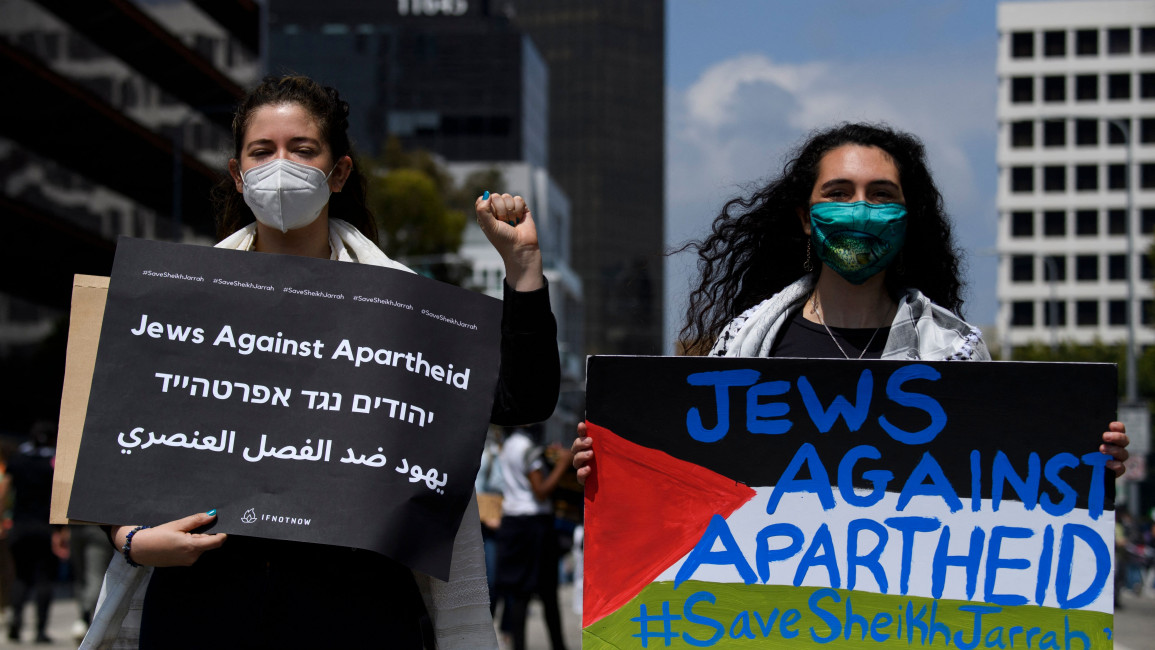 Protesters carry signs reading Jews Against Apartheid during the Los Angeles Nakba 73: Resistance Until Liberation rally and protest outside the Consulate of Israel on 15 May 2021 in Los Angeles. [Getty]

The last few weeks left many people in the racial justice movements confused on the intersections of Antisemitism and Palestinian liberation.

With Ye, the artist formerly known as Kanye West, threatening to go “death con 3 on Jewish people”, many celebrities, activists and influencers have been coming out with support messages for the Jewish community.

The Antisemitic tropes and conspiracy theories that he and other celebrities have spouted recently have been circulating widely, and actually do lead to an increase in violence against the Jewish community.

Following Ye’s tweet, the Goyim Defence League took to the 405 freeway hanging banner saying “Kanye is right about the Jews” while doing Nazi salutes. The FBI recently issued a warning for all synagogues in New Jersey to protect themselves as they received threats for Antisemitic attacks.

"Jewish communities are, of course, terrified. Many non-Jews hold the view that the Holocaust ended and now we are in a different moment. Yet the rhetoric of Antisemitism that led to Holocaust is still alive and well amidst Nazi white supremacists and their sympathisers"

Jewish communities are, of course, terrified. Many non-Jews hold the view that the Holocaust ended and now we are in a different moment. Yet the rhetoric of Antisemitism that led to Holocaust is still alive and well amidst Nazi white supremacists and their sympathisers. We cannot look away from this. Sometimes, social justice movements fail to integrate an understanding of how Antisemitism lives on globally.

Meanwhile in Palestine, thousands of kilometres away, a different fight for social justice is taking place. In Israel, settlers and the Israeli Occupation Forces (IOF) continue to terrorise Palestinians. After all, elections in Israel always mean increased violence against Palestinians, and the far-right victory will likely further embolden violent attacks. The recent elections confirmed the Israeli state as a Jewish supremacist fascist regime.

Following Jenin’s lead, Nablus has become centre stage of Palestinian resistance with the emergence of the armed group Lions’ Den, and faced a three week siege as a form of collective punishment for this resistance.

Israel bombed the old city in Nablus with rockets as the list of martyrs continues to lengthen. Ongoing raids, arrests, and assassinations increase all over the West Bank as Israel hopes to squash the resistance movement through militarised control. Of course, we know that resistance will continue until liberation.

This season is also the time of the olive harvest in Palestine. Palestinians are harassed by settlers simply for existing on their land and harvesting olives. It has been a tradition for Israeli Jews and international activists to come and support Palestinians in harvesting by protecting them against settlers. The violence against Palestinians and activists has increased over the weeks. Hagar Geffen, a 70 year old Jewish activist, was beaten by a group of settlers who punctured her lungs and broke her ribs.

There is no possible way to excuse these ongoing human rights violations. Certainly not in the name of safety of Jews. It is essential that we prioritise the end of the apartheid regime and the brutal occupation.

Yet this manipulation tactic of right-wing movements and Zionist lobbies does not erase the very real threat of actual Antisemitism. As Megan Black says, “Antisemitism is central to the logic of white Christian nationalism, fuelling other forms of racism.” Not addressing this system of oppression will harm us all. With the rise of fascism all around us, we cannot be ignorant of its systemic nature.

"The world is not exempt from understanding Antisemitism by simply supporting Israel. The world is not justified in continuously abandoning the Palestinian struggle in the name of the Jews"

Perhaps this is a good time to remind the world that the state of Israel is not an answer to the global issue of Antisemitism. Israeli propaganda will have the world believe that funding and supporting a highly militarised apartheid regime that brutalises Palestinians daily is somehow in protection of the Jews. Yet as Elad Daniel Pereg writes, “Zionism effectively concurs with the basic tenets of Antisemitism, that Jews do not belong in the world”.

The world is not exempt from understanding Antisemitism by simply supporting Israel. The world is not justified in continuously abandoning the Palestinian struggle in the name of the Jews.

Racial justice movements must show up for both Jewish and Palestinian liberation. These struggles are not at odds as propaganda narratives will have us believe. In truth, they are deeply intertwined. It is time for the world to recognise and reckon with both of our struggles.

Hadar Cohen is an Arab Jewish multimedia artist, healer and educator based in Los Angeles. She is the founder of Malchut, a mystical school teaching direct experience of God through heart centered spiritual traditions. Hadar is a Jewish mystic who works to build decolonial frameworks for worshipping God. She is an artist weaving the spiritual with the political and her artistic mediums include performance, movement, writing, weaving, sound and ritual.