Freedom of speech and the exceptional case of Palestine

Comment: Too many 'progressives' are unwilling to extend their anti-racist and anti-colonial values to support for Palestine, writes Randa Abdel-Fattah. 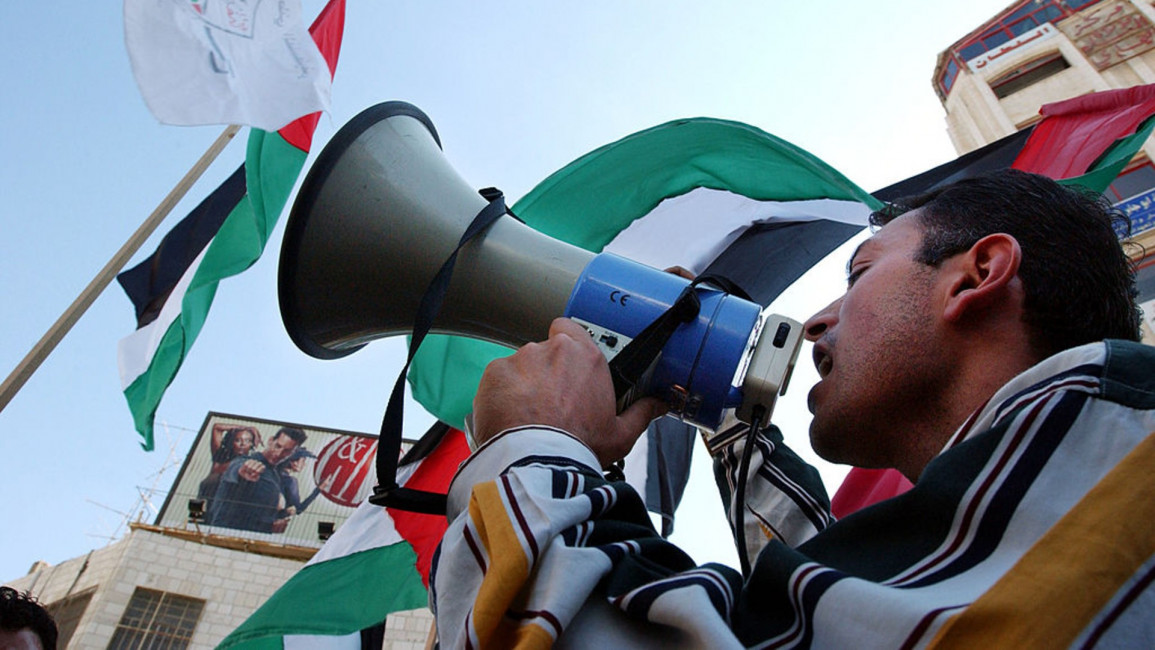 'Palestine is an unfailing litmus test of freedom of speech' writes Abdel-Fattah [Getty]
Twitter these days is ablaze with debate on freedom of expression, so let me tell you a story about freedom of speech and the exceptional case of Palestine.

In the days leading up to Israel's illegal annexation of significant parts of the occupied Palestinian West Bank, and in the shadow of Australia being one of only two countries to vote against a UN Human Rights Council resolution condemning it, I was casually scrolling through my twitter feed.

I wondered why those who profess to oppose racism, oppression and injustice rarely dare to tether their politics to Palestine. I can name countless public figures, public intellectuals, academics, artists and activists who have been rightly vocal about a long list of global human rights violations and social and racial justice struggles, but have never once spoken up in defence of the rights of Palestinians.

In the instance of Palestine, we are acutely aware of our erasure in the global human rights industry; to the way in which intersectionality is reduced to a framework for understanding how individuals navigate multiple localised sites of oppression, but rarely scale up to understand how they are implicated in and impacted by the violent politics of western empire.

What does anti-racism as practice - not a timeline of online platitudes and curated bursts of outrage - actually mean to the many academics, artists and public figures who are vocal about fighting settler colonial and racist violence, but scatter in the dust when anyone mentions Palestine?

It was this question that prompted me and my fellow Palestinian sisters and activists, Sara Saleh (human rights advocate and poet) and Micaela Sahhar (poet and researcher) to write an open statement demanding the Australian government publicly oppose the Israeli government's annexation plans, and cease greenlighting Israel's violations of human rights and fundamental principles of international law.

The statement calls on academics, artists and activists to support the Palestinian people in their struggle for self-determination and their aspirations for freedom, justice, dignity, and equality for all.

We sent the statement far and wide. The response took us completely by surprise. Within two days, more than 800 had signed the statement. The honour list of signatories includes prominent Indigenous leaders, Elders, artists and writers, most of whom signed it without hesitation.

Alongside First Nations peoples are some of the most prominent academics and artists in the country, the diversity reflecting a truer picture of the nation. This coming together to express collective solidarity for Palestine is unprecedented.

We believe this statement of solidarity is significant not only because of the impressive list of signatories, but because it reckons with settler colonialism, western imperialism and state-sanctioned racism as a global project that foregrounds First Nations peoples in solidarity with Palestinians. In doing so, it crystallises what it means to truly practice anti-racism in a world where the ongoing impacts of settler colonialism are lethal.

We approached media outlets, armed with countless precedents of open letters and statements being published. Overland Journal, with its established track record for platforming marginalised voices instantly agreed to publish the statement, and it was also reported on in this publication.

Read more: Criminalising BDS shows us what Israel fears most

But trying to publish in Australia's establishment media was another story. As Palestinian Australians, we are accustomed to fighting for a public platform. We are used to being warned to "tone it down", "not get emotional", "be civil", edit our words, amend our arguments, adjust our language, and rely on "human stories" over legal arguments.

To reckon with apathy, double standards or pushback is one thing. But to confront deliberate erasure is quite another. We were - and are - still being met with a concerted strategy of disappearing and silencing Palestine in public discourse. The rhetorical shields and strategies deployed to deflect, block and censor Palestine and its supporters constitute a form of violence against colonised peoples who are fighting both physical erasure in Palestine, and erasure from public discourse here.

Palestine is an unfailing litmus test of freedom of speech, and it is a test so-called progressives fail over and over again.

There is a litany of examples demonstrating Palestinians are the exception in "free speech" debates. Last week, Harper's Magazine published an open letter by some of the English world's most powerful writers, journalists and public intellectuals. claiming that "the free exchange of information and ideas, the lifeblood of a liberal society, is daily becoming more constricted."

Palestinians on social media were quick to point out what so many others failed to notice: The list of signatories bemoaning "the restriction of debate" includes many figures who have acted to silence Palestinian voices and their acts of peaceful resistance in the past. Bari Weiss, who today resigned from the New York Times, has a long history of involvement in campaigns to vilify several Arab and Muslim professors over their criticism of Israel, is just one example.

Others are JK Rowling, who long before her transphobic tweets, responded to a call for a cultural boycott of Israel by signing a counter statement against the boycott of Israeli products, and Margaret Atwood, who responded to an open letter from Gaza students asking her to reject a million dollar prize from Israel, with "we don't do cultural boycotts".

Over on Instagram, model Bella Hadid's post with a photograph of her Palestinian father's passport and the caption "I am proud to be Palestinian" was removed by the platform "because it went against the platform's community guidelines". Here was social media's annexation of Palestine on show for all to see.

Censoring Palestine is an effective way to elide the deeper political and historical causes of global injustice, the connections and global intersections of state violence.

When Palestine is suppressed, the liberal elite can comfortably posture as so-called progressives, without having to complicate their politics by interrogating their complicity in whitewashing crimes against Palestinians. We have a name for this: PEP. Progressive Except Palestine.

If solidarity is a moral imperative, and not performative selective posturing, it must be uncompromising, reflexive and honest.

In a time of social media, where Israeli war crimes and human rights violations are exposed online, there are no longer blind spots, pleas of ignorance, or "it's complex".

While the statement was deliberately stonewalled by mainstream Australian media, it remains a powerful affirmation that colonised people will stand together, despite attempts by powerful institutions to stifle and undermine this kind of collective solidarity.

This is why we started a fundraising campaign to buy advertising space in the print edition of a newspaper to publish the full text of the statement as an ad. It seems the only way Palestinians can be heard in Australian mainstream media is in exchange for money.

It remains to be seen whether these media platforms will accept to run the ad. Either way, we will continue to pursue every avenue to elevate the voices of Palestinians, and those who stand in solidarity with them.

Abdel-Fattah
https://twitter.com/RandaAFattah
Recent Articles
Eid al Adha: Ummah before the nation state
08 Jul 2022
Australia’s Muslim women’s festival: By and for Muslim women
13 Jun 2022
For Palestinians Eid can be a festival of betrayal
07 Jun 2022
Shireen Abu Akleh and the silencing of Palestine resistance
16 May 2022
View More
More in Opinion