Shireen Abu Akleh: the silencing of Palestine reporting and resistance

From the killing of Shireen Abu Akleh and other journalists by Israel, to Western governments' policies that weaponise antisemitism and criminalise BDS, these are all tactics intended to silence Palestine solidarity, writes Randa Abdel-Fattah. 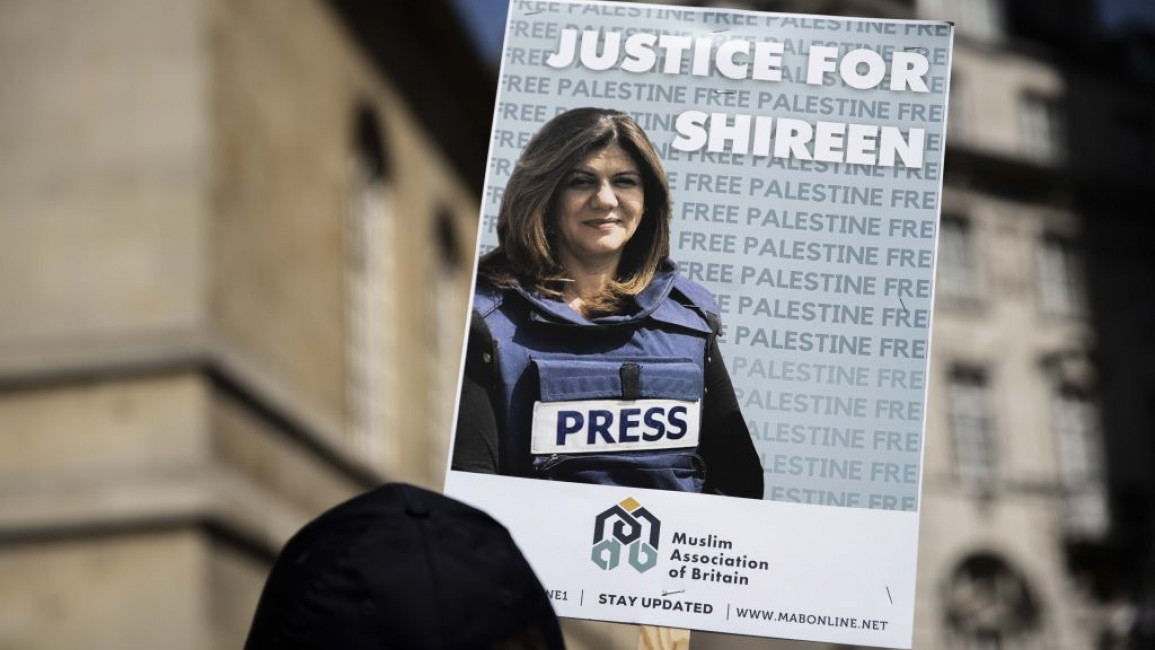 Over here in Australia, also on the same day, Victoria’s Premier Daniel Andrews announced his government’s adoption of the International Holocaust Remembrance Alliance (IHRA) so-called ‘Working Definition of Anti-Semitism”. Andrews’ announcement follows other Federal and State governments who have also adopted the definition or stated an intent to do so.

This juxtaposition of Shireen’s assassination with Western governments’ moves to introduce anti-BDS laws and endorse the IHRA definition cannot be understated.

On the one hand: the murder and hence permanent silencing of a Palestinian journalist renowned for over two-decades of fearless truth-telling from occupied Palestine.

On the other hand: state-sanctioned measures to silence Palestinians through punitive legislation and deployment of a definition of antisemitism which has been widely criticised as a tool to attack Palestinian advocates and their allies.

''We cannot watch the violence in Palestine and assume it is disconnected from what is unfolding in Western societies. Adoption of the IHRA definition is inextricably tied to the violence perpetrated against Shireen Abu Akleh. The common thread is the overarching objective of denying and silencing Palestinian advocacy, agency and terms and forms of resistance.''

As I process my shock at Akleh’s murder, it becomes even clearer to me that anti-BDS laws and adopting the IHRA cannot be disconnected from the Israeli regime’s campaign of silencing and suppressing Palestinian reporting, advocacy and resistance within occupied Palestine. Israel’s foreign policy levers and military tactics are one and the same within a broader, brutal, settler colonial project.

In Palestine, to bear witness to the Israeli regime of occupation, settler-colonialism and apartheid is to demand accountability. This explains why Israel— a nuclear armed military juggernaut supported by Western governments, including Australia— has no hesitation in routinely eliminating, attacking and imprisoning Palestinian journalists who seek to document Israel’s crimes and hold the regime to account.

Shireen’s iconic status accounts for why her murder has received widespread attention and mourning. She is the 55th Palestinian journalist to have been killed by Israel since 2000. For the Israeli regime, wearing a flak jacket clearly marked with the word “press” means you are marked for execution, not protection.

Whilst covering the Great March of Return in the Gaza Strip in April 2018, Palestinian videographer and photo-journalist Yaser Murtaja, also wearing a visible press vest, was shot by Israeli soldiers. When journalists are not silenced through death, they are brutally attacked. Just a few days ago, +972 reporter Basil al-Adraa was badly beaten by Israeli soldiers while filming soldiers demolishing a home in his occupied West Bank village of Massafer Yatta. During Israel’s bombing of Gaza in May 2021, a building housing the bureaus of Al Jazeera and the Associated Press news agency was destroyed by an Israeli air strike.

The incontrovertible fact is that the IHRA Definition is being orchestrated as a mechanism to attack political speech, academic freedom and political protest by conflating antisemitism and criticism of Israeli policies.

If the testimony of Palestinians and their allies is not enough, consider that mainstream Jewish-American organisations and many Jewish Australians have rejected the IHRA definition. Fifty-six Jewish scholars of antisemitism have rejected the definition as ‘highly problematic and controversial’. Even the definition’s lead Jewish drafter has condemned the weaponisation of the working definition to “suppress political speech.”

Victory to the Palestine movement in France!

We saw this here in Australia two weeks ago, following the University of Melbourne Student Union passing a historic resolution calling for the university to participate in an academic boycott of Israeli institutions and cut ties with Israel. The students were subjected to vile abuse by the shrill cries of Israel’s defenders, and denounced as antisemitic by their university. The motion was used by lobbyists as reason to call for Melbourne University to adopt the IHRA definition to “empower university staff and students to call out antisemitic conduct when it occurs and send a strong message of support.”

Given that the University and lobby clearly felt empowered enough to vilify the students as antisemitic without recourse to a definition, one must consider what additional power the IHRA definition would provide.

The IHRA Definition is about directing the terms and norms of debate, foreclosing Palestinian present testimony and documented history, and controlling how Palestinians can resist their oppression. It is about burying the Palestinian narrative, either with the bodies of journalists in their graves in Palestine, or under the rubble and destructive debris of accusations of antisemitism against Palestinians and their allies outside Palestine.

Under the IHRA “claiming that the existence of a State of Israel is a racist endeavour” is equated to “denying the Jewish people their right to self-determination” which is then considered to be antisemitism. Under such a definition, Amnesty International’s recent report declaring that Israel practices a system of apartheid against Palestinians, is also ‘antisemitic’. The dozens of reports by Palestinian, international and Israeli human rights organisations are therefore ‘antisemitic’.

Denouncing the BDS movement as antisemitic and calling for the criminalisation of BDS, two of Australia’s long-time Israeli propagandists claimed that BDS proponents “revise history, beginning with their denial of the indigeneity of Jews to their historic homeland Israel”. The substance of such a claim is not worthy of dignifying with a response. What is important to note is the attempt to control how history is narrated, whose history is privileged and whose history can be delegitimised through the smear of antisemitism.

We saw the Nakba through our grandparents’ eyes

On the same day Shireen Abou Akleh was killed and her colleague, Ali al-Samoudi, was shot in the back by Israeli soldiers, Premier Daniel Andrews, almost as though he were reading from the Zionist lobby’s script, boasted that the IHRA definition “ensures that Jewish history can never be rewritten or diminished”.

We see here how the IHRA definition is instrumentalised to control the terms of debate, empower Zionists to monopolise history and suppress the truth.

As Palestinians were shot while literally performing their job of documenting, recording and truth-telling history in the making, Andrews exposed an agenda that seeks to ensure that Palestinian history is not written, and that the Palestinian struggle for liberation, not Jewish history, is diminished.

And so we cannot watch the violence in Palestine and assume it is disconnected from what is unfolding in Western societies. Adoption of the IHRA definition is inextricably tied to the violence perpetrated against Shireen Abu Akleh. The common thread is the overarching objective of denying and silencing Palestinian advocacy, agency and terms and forms of resistance.

What Israel and its morally bankrupt supporters still do not grasp is that warfare or lawfare will never silence the indomitable will of the Palestinian people.