Ibrahim Abul-Essad argues that the police brutality and repression meted out against Palestine activists from the UK to the US following attacks on Gaza, reflects the interests of both countries in maintaining support for Israel’s colonial project. 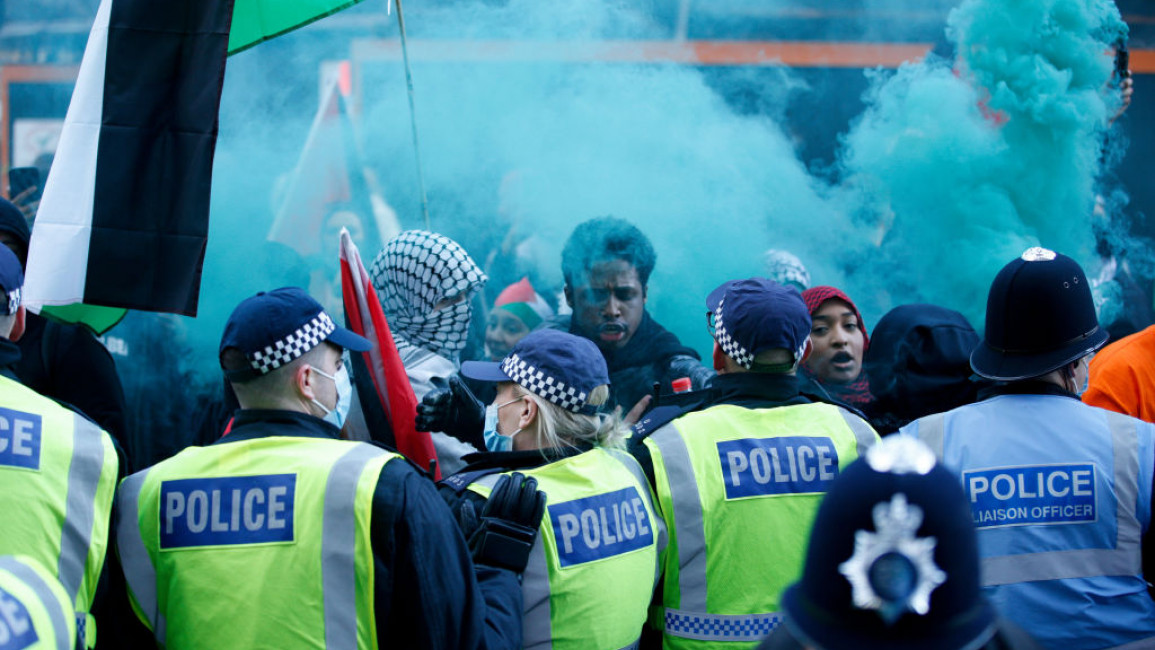 Organised by activists in the local area, this protest was a direct response to Israel’s recent military aggression in Gaza that took place in early August, and killed at least 49 Palestinians, including a minimum of 17 children and 4 women. It is important to note that the status of 22 fatalities remains undetermined. No Israelis were killed or seriously injured.

Huda Ammori, co-founder of Palestine Action, recounted her experience with police brutality during a Palestinian-related event:

“I was thrown to the ground almost instantly, cuffed from behind the back. It was quite obvious the racism police had towards me…people who had been on extinction rebellion actions and protests had never seen that type of brutality used against them”.

''Representatives of the Black Lives Matter (BLM) movement were quick to identify the  “many parallels” of violence projected by the police force towards African-Americans and Palestinians.''

Indeed, we must question why there is such a high level of police violence projected toward Palestinians, specifically during demonstrations that call for Israel to be held accountable for the war crimes that it commits.

Records show that the Metropolitan Police sends its officers to undergo training courses provided by representatives from the Israeli military. In 2014, at least 80 personnel working for the Met travelled to Israel to undergo a ‘tactics and strategy’ programme.

“Their [Israel’s] methods are developed in a context, where the ‘citizens’ are seen and treated as an enemy to be crushed,” explains investigative researcher Eran Efrati.

Amnesty International, which found Israel guilty of practicing apartheid in 2021, reported last year how the Israeli police use “a catalogue of violations against Palestinians”, and that their actions were “repressive and discriminatory”. If forces are sharing expertise, it is no surprise, therefore, that Palestinians in the West experience similar excessive violence during demonstrations.

Furthermore, given Britain’s interest in preserving its colonial legacy, the state works tirelessly to safeguard Israel’s socio-political and economic interests. Currently, pressure is being placed upon institutions throughout the country to adopt the IHRA’s definition of antisemitism, in an attempt to silence anyone who criticises Israel. Additionally, the government has introduced anti-BDS legislation which can effectively criminalise Palestinian activism.

In July, patrol officers from the Oak Lawn Police Department in the state of Chicago used excessive force against a young Palestinian-American who they had stopped and searched. Hadi Abuataleh was struck several times by a fist to the back of the head as he was being pinned down by another officer. The teenager, hospitalised, suffered from internal bleeding to the brain and a broken nose.

In Sunak's fight for PM, Palestinians are collateral damage

There is a long-standing history of police brutality against Palestinians in the US.

The Anti-Defamation League (ADL), a counter-insurgency organisation, was founded in 1913 to protect the mutual interests of the US and Israeli governments. One of its earliest efforts was to spy on groups in the US on behalf of Mossad, Israel’s secret intelligence service. In 2017, the ADL provided racist training programmes for all 160 staff members of Chicago’s Skokie Police Department, focusing on concepts such as “identity, culture, implicit bias, stereotyping and discrimination”

The ADL also organises annual trips to Israel, where US police officers are trained by the Israeli military.

Similar to Britain, the US has expressed unequivocal support for Israel and has worked tirelessly to protect its interests since World War II. For example, last year in May, the Biden administration approved $735 million in weapon sales, despite Israel having killed at least 66 Palestinian children in Gaza that month.

Israeli forces continue to police Palestinians in innovative and brutal ways. If these colonial methods of suppression inform training sessions with police in the US and Britain, it can only mean bad things. These institutions, which have historically been associated to violent repression of poor, migrant and racialised communities, are likely to worsen in their behaviour.

Representatives of the Black Lives Matter (BLM) movement were quick to identify the  “many parallels” of violence projected by the police force towards African-Americans and Palestinians. With this in mind, activists in both the US and Britain, who experience a similar form of state brutality, must share ideas, adopt and later develop methods designed to effectively hold institutions to account, in order to stop the continuing brutality at the hands of the police.

This is also the only way to stop the targeting of Palestine solidarity that seeks to end Israel’s colonial violence.

Ibrahim is a UK-based Palestinian researcher and activist. He received his masters degree in Middle East Studies from Leiden University, specialising in the formation of Palestine since the fall of the Ottoman Empire.