The emergence of a new armed resistance group in Nablus, the Lions’ Den, marks a revival of the Palestinian anti-colonisation movement by younger generations in which popular support is a vital part of the struggle, writes Abu-Jildeh. 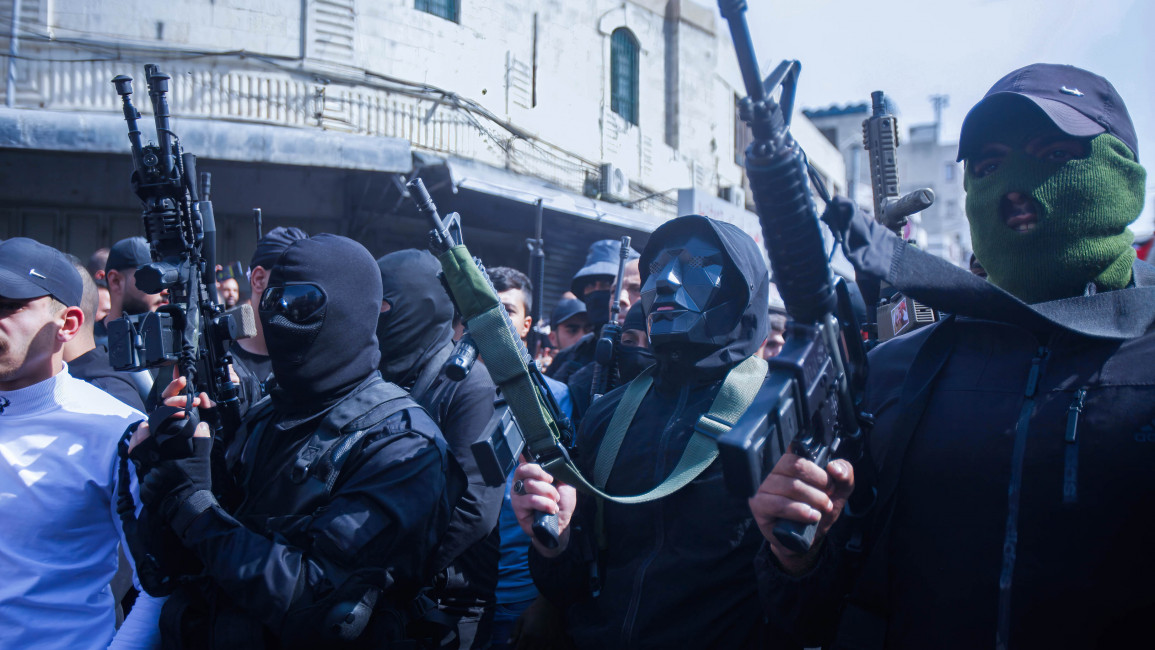 Members of the armed resistance group Lions' Den participate in the funeral of five Palestinians who were shot dead by the Israeli army in an Israeli night raid. [Getty]

Footage of a young man shooting relentlessly swept the internet last week. Despite multiple bullets piercing his body, the young man persisted, even when he could no longer stand. After running out of ammunition, he reaches into his pocket for more as a barrage of bullets hits him.

Commentators have described the footage as an epic battle scene from an action film, but the footage is not fiction. It shows the defiance of Udai Tamimi in the face of Israeli security forces at the entrance of the illegal settlement of Ma’ale Adumim on October 19th.

A 22-year-old man from Shuafat refugee camp, Udai’s journey to martyrdom began on October 7th, when he shot and killed an Israeli soldier at a checkpoint leading to Shuafat. His targeted locations were not coincidental; these sites represent Palestinian oppression and ongoing Israeli settler colonialism in areas of strategic importance to the Israeli state.

The checkpoint was erected during the Second Intifada. In 2009, Israel announced the transformation of the supposed temporary wall into an “international crossing”, in effect separating the areas that fall under the Israeli municipality of Jerusalem and those that fall under the West Bank and making prisoners of the residents.

"The refugee camp in popular history is much more than a site of mere oppression. Shuafat camp, like many, resembles steadfastness"

The camp holds strategic importance as it links the northern and eastern Palestinian villages of the city of Jerusalem. As such, the annexation of the camp’s land would not only fragment the remaining Palestinian communities in Jerusalem but also connect a chain of illegal Israeli settlements (including Ma’ale Adumim) encompassing the city.

In January, Israel declared the annexation of 500 dunams of land from the village of Issawiya, Shuafat camp and the town of Anata, towards this vision of uniting the Israeli settlements- a testament that the two-state solution is a myth.

The refugee camp as a site of resistance

Udai’s ability to conduct two operations in areas of strategic importance to the Israeli state and evade capture for 12 days captured popular media as the Israeli military sieged and raided the camp. The refugee camp in popular history is much more than a site of mere oppression. Shuafat camp, like many, resembles steadfastness.

Historically, the Palestinian anticolonial revolution was shaped by and rooted in the refugee camps in Jordan and Lebanon. With the rise of the armed Palestinian resistance in the last century, the figure and representation of the refugee shifted from an impoverished person to the heroic warrior that Udai has come to symbolise for Palestinians today.

"The Shuafat refugee camp symbolises an oppressed people who had to leave their towns and homes."

Life in Shuafat: A Palestinian refugee camp under siege

With Israel’s siege on the camp, images of young boys shaving their heads in solidarity to help him evade capture filled social media. Memories of the 1936 Peasant Revolution are alive here, when Palestinians in the cities wore Keffiyehs that were usually worn by the revolutionaries in order to deter the British military from capturing their targets.

According to Israeli military analysts, Udai’s second operation demonstrates a massive failure of Israel’s security apparatuses. These forms of community support to the resistance are what Palestinians label as Al Hadena Al Sha'bya – the Popular Cradle.

On October 12th, five days after Udai’s first attack and Israel’s subsequent siege on the camp, the newly formed Nablus-based Palestinian resistance group, Areen Al-Usud (Lions’ Den), called for their first general strike across Jerusalem and the West Bank in solidarity with Udai and Shuafat camp.

Like Shuafat refugee camp, the city of Nablus has also been under full military siege since October 11th, following an operation conducted by the Lions’ Den that led to the death of an Israeli soldier near the village of Sebastia. To date, the group has been responsible for more than 35 operations.

Initially, their goal was to confront soldiers and protect the city during military raids and the storming of Nablus by Israeli settlers. However, more recently the group has moved to the offensive, relying on the element of surprise, and declaring their intentions to attack the occupation instead of only defending Palestinians in the face of it. They have repeatedly emphasised that armed resistance rooted in Al Hadena al Sha’bya is the path to liberation.

There are various forms of this support including material, moral, financial and social. Examples of these forms include deterring the enemy, harbouring fugitives, warning the resistance of possible danger, production of literature and media that supports the resistance, and much more.

What these groups have come to understand, as emphasised repeatedly by Lions’ Den, is that resistance cannot take place without the popular cradle. Not only does the group keep the people informed about its activities, operations and intentions, but it also communicates with the public regarding on-the-ground support for its operations.

These include requests for general strikes, blocking of roads in order to deflect the attention of the army and stop raids and for people to switch off their CCTV cameras to ensure the safety of militants.

Palestinians took to the streets on multiple occasions in support of the group with chants being heard from Haifa to Gaza. Supporters on social media share songs, videos and pledge support to the group. The logic of the popular cradle requires a sense of synchronicity between the two, whereby the masses can begin to anticipate what the resistance needs in urgent situations.

Nothing demonstrates this better than when an Israeli armed unit invaded Nablus in the early hours of 25th of October. Despite heavy clashes of ammunition, hundreds of youths went to the street to support the Lions’ Den. In this sense, the popular cradle includes people being ready to bear the costs of resistance.

Palestinian youth are the new leaders of the resistance

While various Brigades were operating during the Second Intifada, what marks this phenomenon as different is that the Lions’ Den represents a group of youth who came together to defend their people. Like Udai, the newly formed group represents a new generation of young Palestinians who are fed up with colonialism and its Palestinian collaborators. It is a non-hierarchical and non-partisan group.

The rise of these groups does not only demonstrate the dissatisfaction with the Palestinian Authority and the leadership of the various political parties but also a move toward reigniting the sense of Palestinian unity and state of resistance experienced during the events of May 2021.

"Members of the group are aware of this ever-present possibility of being killed before any changes to the status quo are made, just as Udai did. For that, they lay their trust and faith in the popular cradle to continue producing revolutionaries who will fight for the liberation of the land and their people"

With growing pressure from Israel, the Palestinian Authorities have attempted to negotiate with members of the group by offering to buy their weapons and offering them jobs within the security forces.

Since the emergence of the group, the Israeli army has been carrying out limited military operations while avoiding a full invasion of Nablus. Officially, Israel has killed five of the group's members. In conducting assassinations by deploying its special forces, Israel has revealed a security failure in pursuing and weakening the growing phenomenon of new resistance fighters in the occupied West Bank. Yet a full invasion would lead to more rebellion in the street and increase the popularity and confidence of the resistance.

While talk continues regarding Israel’s potential strategy, members of the group are aware of this ever-present possibility of being killed before any changes to the status quo are made, just as Udai did. For that, they lay their trust and faith in the popular cradle to continue producing revolutionaries who will fight for the liberation of the land and their people.

What has been made clear from recent events is that the new generation truly believes in sacrifice, and they see that only active struggle between them and the coloniser is the key to any sort of progress toward their goals. They have come to understand that it is the accumulation of resistance that will lead to liberation.

Abu-Jildeh is a Palestinian academic and organiser.