Targeting BDS is about repressing all political dissent

Yara Hawari highlights the concerning policies that the UK government is using to target both Palestine solidarity, as well as wider social justice movements and mobilisations. This also presents an opportunity for collective resistance, she writes. 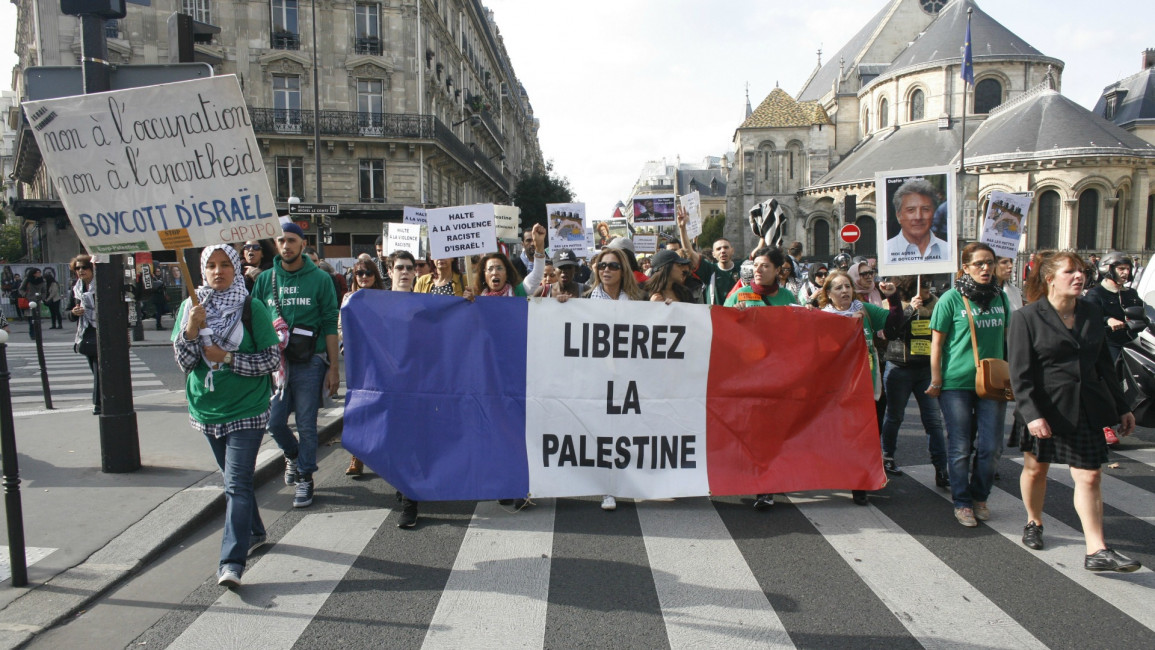 There have been several victories across Europe over the right to Boycott, including in France where a criminal court in Lyon recognised the legitimacy of the character of the BDS call, writes Yara Hawari.

In her May 2022 speech at the opening of Parliament, the Queen affirmed that the UK government will put forward “legislation [that] will prevent public bodies engaging in boycotts that undermine community cohesion.” Whilst not specifically singling out the Boycott Divestment and Sanctions Movement (BDS), various Conservative Party politicians have previously made it clear where their motivations lie.

For example, MP Robert Jenrick claimed in an online conference that, “within a year or two we should… have an absolute ban on BDS here, which would be a great step forwards.” Meanwhile, Conservative MP and government-appointed Special Envoy for Post-Holocaust Issues, Eric Pickles, insisted at a conference in Jerusalem in 2019 that the BDS movement is antisemitic and that proposed legislation would not allow public bodies to divest from or boycott the Israeli regime.

Palestine solidarity groups have fought manoeuvres like this before. In 2017, the Palestine Solidarity Campaign (PSC), along with a coalition of allies, started a legal battle to fight the British government’s introduction of “guidelines” a year prior, that denounced procurement boycotts by public bodies as “inappropriate”.

''It is clear that the British government is attempting to create a chilling effect in order to deter Palestine solidarity activists and allied movements from organising. Yet this wide reaching crackdown has also resulted in activists from a broad spectrum to work together to push back against this repression.''

Palestine solidarity activists and allies recognised this as a clear attempt to silence BDS.

In April 2020, the PSC defeated the UK government in a landmark case at the Supreme Court. The court ruled against the aforementioned government guidelines, which restricted the ability of local government pension schemes to remove investments from companies complicit in the Israeli regime’s violation of Palestinian fundamental rights.

The PSC’s success coincided with other successful legal interventions across Europe in pursuit of upholding the right to boycott. In 2020, a German Regional Constitutional Court ruled against an anti-BDS motion, stating that it impinged on fundamental rights. And in May 2021, a French criminal court in Lyon recognised the legitimacy of the character of the BDS call.

Yet, the latest announcement in the Queen’s speech shows that the fight is far from over.

Whilst it has worrying consequences for the BDS Movement, legislation restricting boycotts also effects those wanting to pursue boycotts as a form of protest against other powers involved in human rights abuses. A statement from a group of British NGOs noted that this will, “stifle a wide range of campaigns concerned with the arms trade, climate justice, human rights, international law, and international solidarity with oppressed peoples struggling for justice.”

Clearly the Palestine solidarity movement is not the only one at risk. Indeed this renewed focus on BDS also coincides with a wave of legislation aiming to criminalise a wide range of social justice and political movements including the likes of Black Lives Matter (BLM) and migrant and refugee activists.

Weep with rage for the betrayed ghosts of Grenfell

Some are even calling it a plunge towards a “police state” reality. These include the Nationality and Borders Bill, which attempts to halt immigration from certain parts of the world by criminalising asylum seekers and introducing “offshore” processing centres, and efforts to reform and restrict the Human Rights Act — essentially allowing the government to pick and choose who has access to human rights.

Perhaps most worrisome for political campaigns and movements is the Police, Crime, Sentencing and Courts Bill (PCSC) which passed through Parliament on April 28, 2022. The bill expands and extends the powers of the police and other institutional authorities. Human rights groups and activists explain that this is a massive overreach of political power and an attempt to suppress protest.

The PCSC bill gives the Home Office and police officials broad discretion to deem protests illegal and to arrest and charge attendees and organisers. A protest can be deemed illegal if it simply makes too much noise, and anyone may be arrested and charged for organising or sharing information about protests.

The bill also further criminalises “trespassing,” which not only attempts to limit the spaces of political activity, but also directly targets nomadic Gypsy, Romany, and Traveller communities.

In addition to arrests, punishments under the PCSC bill include lengthy prison sentences and hefty fines. The UK-based human rights group, Liberty, stated that the provisions in this bill will affect everyone and will dismantle “hard-won and deeply cherished rights to freely assemble and express dissent.”

It is clear that the British government is attempting to create a chilling effect in order to deter Palestine solidarity activists and allied movements from organising.

Yet this wide reaching crackdown has also resulted in activists from a broad spectrum to work together to push back against this repression.

Since the beginning of 2021, thousands from various political movements have taken to the streets across big cities in the UK in ‘Kill the Bill’ protests. The mass mobilisation helped push the House of Lords to reject the bill twice due to grave concerns about its repressive nature.

Even though the bill was eventually passed, the campaign highlights the need to fight these latest manoeuvres in broad intersectional collectives. These collectives are not only able to exert greater pressure on the government, but they are rooted in the conviction of the connectedness of struggles, as well as a shared belief in resistance to oppression.

This piece draws upon a policy brief by Al Shabaka.

Hawari
https://twitter.com/yarahawari@
Recent Articles
Europe's lack of empathy for refugees is shocking
28 Sep 2022
A music studio and the destruction of Palestinian Jerusalem
15 Aug 2022
US aid and the façade of peace and reconciliation
06 Jun 2022
The farce of Israeli peace-making
17 Mar 2022
View More
More in Opinion

I took a political tour of Palestine. Now, I must act