And just like that, armed resistance is trendy for the West in Ukraine but not the rest

And just like that, armed resistance is trendy for the West in Ukraine but not the rest
Voices
6 min read

The double-standard in Western support for Ukrainian armed resistance, compared to the vilification of armed struggle across the non-Western world, especially Palestine, sends a clear message: Only "we" are allowed to fight back, writes Emad Moussa. 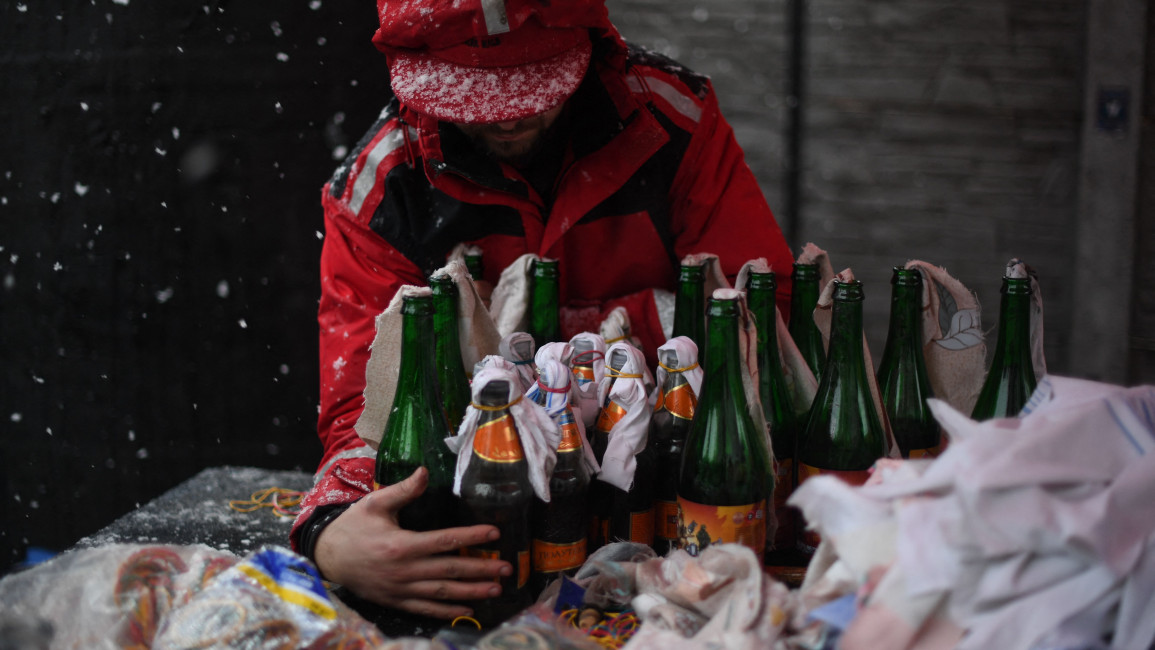 In response to the Russia invasion, Ukrainian civilians make Molotov cocktails to be used against Russian forces on February 27, 2022. [Getty]

The ongoing Russian invasion of Ukraine has sent shockwaves across the globe, invoking widespread sympathy with the Ukrainians as they stand defiant against Russia’s aggression.

Pro-Russia media explained the Kremlin’s position in line with its geopolitical apprehensions, accusing NATO of encroaching upon Russia’s security space in Eastern Europe, and Ukraine in particular.

As a second-line of defence, the Soviet-era practice of whataboutism was deployed to counteract anti-Russia’s sentiments. Any criticism of Russia’s behaviours was retorted with listing a litany of complaints against Western imperialist interventions in places like Iraq, Libya, Afghanistan, and so many more.

But on the other hand, Western media outlets have responded to the Russian invasion by reviving Cold War sentiments, painting Russia as a monolith with values threatening to Western ideals. Some commentators went as far as to reduce the entirety of Russia down to a single person, Vladimir Putin.

"Much of the comments witnessed these past few days have seemed to suggest, among other things, that economic factors and skin colour are prerequisites for civilisation"

Much like Hitler, or at least this is how Prince Charles described Putin in 2014, the Russian leader’s motives and state of mind are represented as the epitome of political depravity, a stereotypical megalomaniac dictator set on carving up his neighbours while suppressing dissent at home.

In the middle of these polemics, Western media made a Freudian slip, reanimating deeply-rooted double standards that lay hidden behind the general political correctness, terminological cautiousness, and so-called Western journalistic professionalism and objectivity.

Most recently, Western analysts and journalists have come under fire for contextualising the Ukraine conflict along the paradigm of a “civilised” people who are “like us,” unlike "the others" coming from remote conflicts such as Afghanistan and Iraq.

Much of the comments witnessed these past few days have seemed to suggest, among other things, that economic factors and skin colour are prerequisites for civilisation. As if to say that war is a natural phenomenon that occurs outside the Euro-American geography because of a "lack of civilisation,” and not due to a complex set of geopolitical interferences and historical injustices.

At Ukraine's border, Arab, Asian & African students have faced discrimination and been denied entry into neighbouring countries as they try to flee Russia's invasion.

These comments which continue to emerge have led to general outrage on social media, to the point that the Arab and Middle Eastern Journalists Association (AMEJA) issued a statement denouncing “the pervasive mentality in Western journalism of normalising tragedy in other parts of the world."

As much as the Western otherness downgrades the victimhood of those “who are not like us,” it also devalues or outright condemns legitimate acts of resistance.

This is particularly clear with how most Western governments and commentators have praised and romanticised the Ukrainian people’s steadfastness and resistance. There are plenty of footage and photos of Ukrainian civilians making Molotov cocktails or arming themselves with government-provided guns, and these images are celebrated as heroic.

Quickly, this was followed by generous acts of solidarity, from crowdfunding to explicitly providing the Ukrainian resistance with weapons. Germany reversed its historic policy of never sending weapons to conflict zones, authorising the provision of anti-tank and anti-aircraft weapons to Ukraine, and as did Finland and Denmark.

For Western media, only European lives are worthy of empathy

In the UK, British Foreign Minister Liz Truss repeatedly stated that British nationals can take up arms against Putin, much to the astonishment of many and possibly a breach of laws banning British citizens from enlisting in foreign armies at war with a country at peace with the UK.

This unprecedented support has been politically justified on grounds of Putin’s existential threat to all of Europe. Nevertheless, eyebrows do rise at the hypocritical standards in defining who is or is not entitled to resist a foreign occupation.

One clear case to point out is Palestine. For decades Palestinians were denied not only the right to self-determination, but also the right to self-defence. There are countless examples in which Palestinian resistance to Israel’s occupation has been delegitimised and demonised as an act of terrorism. Pro-Palestine advocacy has been blocked and criminalised by the same European governments that are now leading the efforts to salvage Ukrainian independence and freedom.

What is ironic, to rephrase Israeli journalist Gideon Levy, is that the Ukrainian experience is not very different from the Palestinian experience. Russia’s propaganda justifies the invasion of Ukraine in a similar fashion to that of Israel's invasion of Lebanon or Gaza.

"One wonders if Palestinians were given a fraction of the support provided to Ukraine, would Israel have thought twice before attacking them and stealing more land or deepening its apartheid system?"

Both Russia and Israel use the threat to their national security to deny the national rights of the people they occupy. To Russia, the Ukrainians are not an independent people, and neither are the Palestinians to Israel. Russia claims ancestral rights to Ukraine, and so does Israel to Palestine.

The key difference, however, is that the Ukrainian resistance receives unconditional support and the Ukrainian people’s victim hood is elevated, while Palestinian victimhood is denied and Israel’s perpetration disregarded or even outright supported. One wonders if Palestinians were given a fraction of the support provided to Ukraine, would Israel have thought twice before attacking them and stealing more land or deepening its apartheid system?

The passionate Western solidarity with Ukraine is arguably built upon and draws much energy from an already existing anti-Russia sentiment in the West, otherwise known as Russophobia, which speculatively goes as far back as the 18th century. The majority residing in countries like the US, Denmark, UK, Poland, Sweden, and Germany do hold negative views of Russia. The dynamic has proven to be in Ukraine’s favour.

Moreover, ethnic, religious, cultural, and even socio-economic commonalities usually lead to favouritism and manifests into extra privileges to one’s group while denying the same to "non-members".

What does defending Europe mean?

The Western media has a clear tendency to gravitate toward people who are “like us” and downplay others, even if their experience is similar or worse. Case in point was the 1990s intensive media focus on “white people’s plight” in the Balkans, while giving very little attention to the hundreds of thousands of black Africans being massacred in Rwanda.

In the Middle East and North Africa, the Western bias is also galvanised by an inherently Orientalist worldview. By presenting "the Orient" as incapable of evolving, stuck in an endless past of decadence and eternally backward, it also entails depicting it as a passive subject, incapable or unworthy of being an active subject.

This too not only normalises otherness and unequal victimhood, it redefines the act of resistance as solely a Western privilege, not allowed by the non-Westernised.

To such eyes, only the Ukrainians are "fighting for Europe" and are "heroic" and "noble". Meanwhile, Palestinians are fighting a “civilised” oppressor, mainly “white Zionists” and their Euro-American supporters, and must be "terrorists" and "unrighteous".

One wonders how long this façade can last?

Moussa
https://twitter.com/emadmoussa
Recent Articles
Is going back to the moon worth it?
17 Nov 2022
Rayan Suleiman and growing up in occupied Palestine
12 Nov 2022
Qatar World Cup and the weaponisation of human rights
07 Nov 2022
Balfour: Palestine's fate was decided with a stroke of a pen
03 Nov 2022
View More
More in Opinion