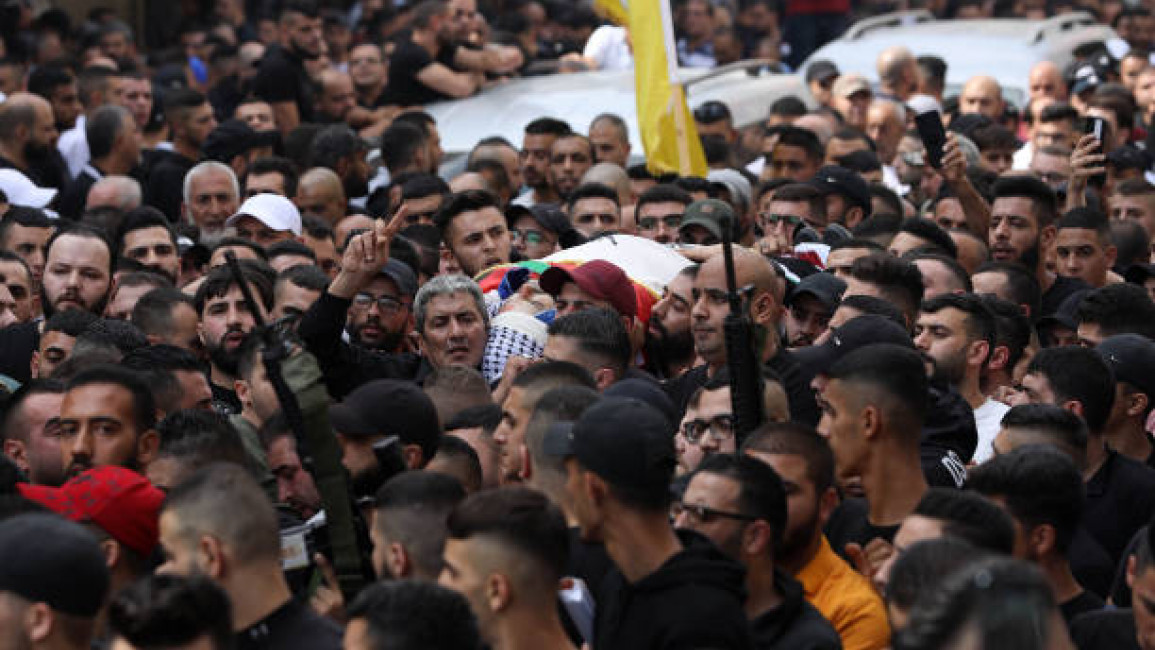 Thousands of Palestinians took part in the funeral of six killed in Nablus and near Ramallah on Tuesday as a general strike was called for by Palestinian factions across the occupied West Bank.

Businesses and institutions were closed in response to the call to strike in all major West Bank cities, including Ramallah, where the Palestinian Authority is based.

The Palestinian health ministry confirmed the identity of the victims, among whom was a leader of the 'Lions' Den' armed group, 31-year-old Wadea Al-Hawah.

According to Nablus-based journalist sources, an Israeli special force entered Nablus' old city shortly after midnight and was noticed by Hamdi Sharaf, 35, and Ali Antar, 26, two local barbers, who alerted residents, before being directly shot dead by Israeli soldiers.

Wadee al-Houh, a top commander of Lions' Den, was killed in the Israeli military operation in Nablus. pic.twitter.com/T1085kbJTo

Sources added that a gunfight broke out between Israeli armed forces and Palestinian fighters, as Israeli forces targeted a vehicle driven by Hamdi Qayem, 30, who was instantly killed.

During the fighting, Israeli forces killed Mishaal Baghdadi, 27, another 'Lions' Den' fighter who had recently appeared during the funeral of Tamer Kilani, another commander of the group killed last Saturday in a targeted explosion inside the old city.

"As soon as the news broke about the Israeli raid, many of us in Jenin headed to Nablus to stand beside our people there," Atta Abu Rmeileh, secretary of the Fatah faction in the Jenin refugee camp, told The New Arab.

Nablus has been besieged by the occupation forces for the 14th day. pic.twitter.com/t611FdBdk6

"We entered Nablus through dirt roads between houses, as the city is still under siege, and arrived as the occupation forces were retreating," said Abu Rmeileh.

"There were large crowds of people at the Rafidia hospital, where Wadea al-Hawah was taken, among whom were many members of the Palestinian security forces who were all mobilised to confront any attempt by the occupation forces to reach the hospital," Abu Rmeileh remarked.

"It was a scene of unity between residents, security forces and resistance fighters, as the whole city was targeted," he added.

Meanwhile, Palestinian fighters attacked the Israeli checkpoints of Salem and Jalamah outside Jenin. In a statement, the 'Jenin brigade' said that dozens of its members opened fire at the Israeli positions in support of Nablus' 'Lions' Den'.

More shootings at Israeli forces were reported at the Qalandia checkpoint and outside the town of Abu Dis, near Jerusalem.

In the village of Nabi Saleh, west of Ramallah, confrontations broke out on Monday between Palestinian protesters and Israeli forces, who fired live and rubber bullets and tear gas canisters, killing 16-year-old Qusai Tamimi.

"My beloved brother, your loss has broken me, and nothing will be now like before," his sister, Malak Tamimi, wrote on her Facebook account following the confirmation of his death.

The violent Israeli raid on Nablus came amidst an ongoing siege on the city, which entered its second week, restricting movement in and out of the city.

Israeli forces have tightened movement restrictions across checkpoints at Nablus' entrance, practically isolating the city from its surroundings.

"Vehicles leaving Nablus are being forced to wait for hours, risking being sent back into the city," Mohammad Raei, a human rights activist based in Nablus, told The New Arab.

Israeli troops close Beit Furik checkpoint as the illegal siege of Nablus goes on: Palestinians are literally imprisoned inside their own vehicles pic.twitter.com/jWWNFhakKR

The Al-Najah University in Nablus resumed face-to-face classes after almost two weeks of online teaching, with a minimum of students. The University previously announced that it will arrange special procedures for students who are unable to assist.

The siege, which began on 11 October following the killing of an Israeli soldier in a shooting attack claimed by the Nablus-based 'Lions' Den' Palestinian group, has increasingly impacted daily life in the city, according to residents.

"Our sales dropped significantly despite the fact they haven't completely stopped," Nisreen Ghazal, an owner of a homemade meals business located across the street from the Al-Najah University, told The New Arab.

"It's mostly students from outside the city who buy meals since students from Nablus eat at home," she pointed out. "We usually make between 1,000 and 1,500 shekels of daily sales, but under the siege, we barely reach 400 shekels daily."

Nablus is under siege, cut off from the West Bank by the Israeli military’s checkpoints and barriers, and settler violence. Today is day 9 of the “indefinite” lockdown of over 170,000 Palestinians. This collective punishment is devastating to Palestinians across the West Bank.🧵 pic.twitter.com/hFyylpJ2nb

"Raw food providers to whom I owe thousands of shekels and never call me when business is running, are now calling me to ask if I can pay them back 100 or 200 shekels so that they can pay their debts," Ghazal noted.

"There was a graduation ceremony at the university that was cancelled because of the siege and as a result, all the food orders I had were cancelled too, as most restaurant reservations were also cancelled," she added.

According to residents, the Israeli army distributed an announcement through checkpoints, a copy of which was received by The New Arab, stating that the siege of the city will continue until 13 November.

The New Arab could not verify the authenticity of the announcement.

How Nablus became the heart of the Palestinian struggle

In a statement, the 'Lions' Den' group threatened Israel on Sunday with more armed actions against its forces.

"Besiege everywhere now, unleash your drones and your spies, for we have prepared a fire for you," the statement read.

The 'Lions' Den' statement came following the killing of one of its fighters, 33-year-old Tamer Kilani, in an explosion inside Nablus' old city. The group accused Israel of being behind the killing, describing Kilani as "one of its fiercest fighters".

The siege of Nablus followed a string of Israeli military raids on the city and shooting attacks by Palestinian fighters against its forces amidst a larger escalation in the West Bank.

The bloody escalation by Israel has claimed so far the lives of more than 120 Palestinians, according to the Palestinian health ministry.