Teenager killed by Israeli forces 'felt rage' over Nablus and Jenin: family
MENA
5 min read
Qassam Muaddi
West Bank
"May God have mercy on his soul; he only dreamed of a free Palestine," his mother said to the press during the funeral. 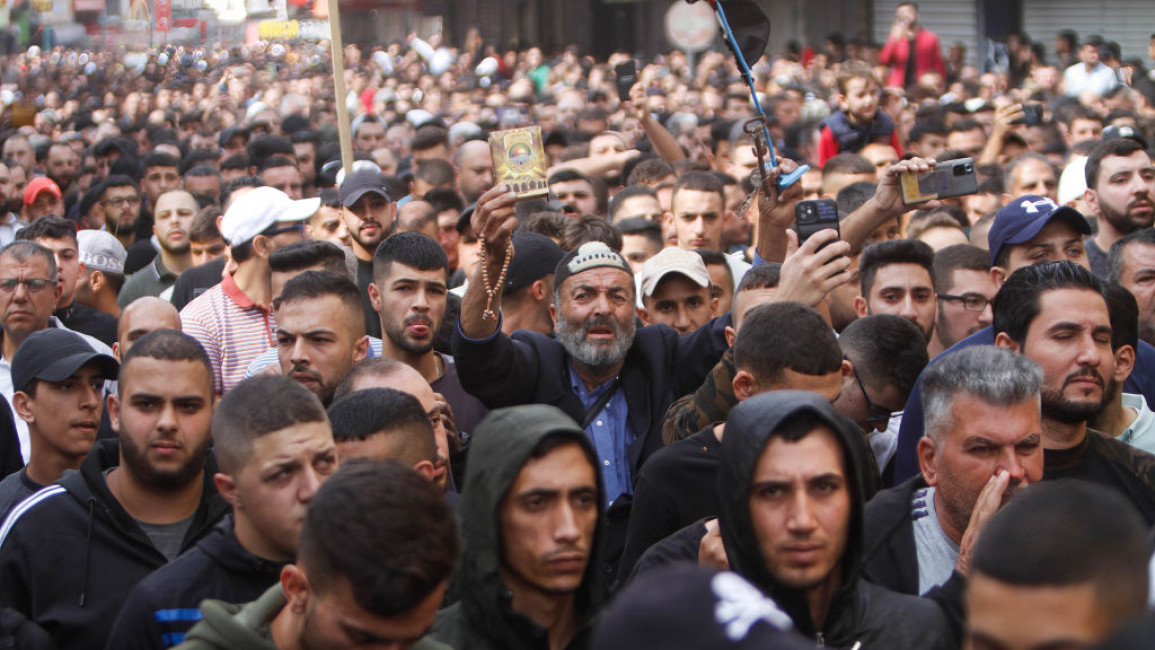 Hundreds of Palestinians took part on Tuesday in the funeral of the 19-year-old Palestinian teenager Qusai Tamimi, who was killed by Israeli forces in the village of Nabi Saleh, west of Ramallah.

Qusai Tamimi was killed while protesting in Nabi Saleh against the Israeli raid on Nablus, which killed five Palestinians and wounded more than 20.

The crowd marched with Tamimis' body through the village holding Palestinian flags and chanting slogans, before burying it at the village's cemetery,

"My daughter told me in the morning that I rather not see the news because Nablus was being raided and there were five martyrs," his mother told the Palestinian state news agency 'Wafa'.

"I looked out the window and saw the smoke of burning tyres at a distance, and my daughter told me young men were protesting in support of Nablus," the mother recounted.

"While I was looking, I heard three or four fire shots," she described. "I felt as if those bullets went straight to my heart."

Qusai Tamimi was the third of four siblings and had grown up in Nabi Saleh all his life. He "always showed affection to people around him since he was a little child," his sister, Malak Tamimi, said to The New Arab.

"When we would ask him and his little brother which of us two older sisters they loved more, he would wait to see which one his younger brother would pick and then pick the second, to avoid upsetting any of us," she recalled.

Palestinians in Nabi Saleh village, northwest of Ramallah, participate in the funeral procession of the Palestinian youth Qusai al-Tamimi who was murdered at dawn by the lsraeli occupation forces. pic.twitter.com/yVQTP8hj8v

"Qusai was passionate about technology and computers," noted his sister. "He wanted to learn something related to technology or electronics, but in recent years his performance at school began to decline, and then he dropped out a couple of years ago and took a job at a restaurant in Ramallah."

Like many young Palestinians of his age, the recent violent Israeli escalation in the occupied West Bank impacted Qusai Tamimi, and it took a toll on his time and thought, according to his sister.

"He was very attentive to news of Nablus and Jenin in recent months, always looking at the pictures of martyrs and expressing rage and incapacity," the sister said.

"His daily life began to be limited to going to work, coming home and sleeping, and taking all the time about the news and confrontations, at home but also with his cousins and friends," Malak added.

PHOTO: Family of Qusai Tamimi, 20, bids him a sad farewell. Tamimi was killed by Israeli soldiers in Nabi Saleh village, north of Ramallah, during clashes that erupted to protest the army assault on Nablus.#نابلس pic.twitter.com/w5VBRiEXN6

The situation of his home village, Nabi Saleh, known for its weekly protests against the Israeli wall that cuts through the village's lands, also influenced Tamimi.

"Qusai began to take part in all protests, and whenever the occupation army would raid the village he would go out to confront them with stones," Malak Tamimi noted. "His life in the latest weeks had become exclusively work, sleep and protests."

The bloody Israeli raid provoked angry reactions in several locations in the occupied West Bank. In Jenin, Palestinian fighters opened fire at the Israeli checkpoints of Salem and Jalamah while more shootings at Israeli forces were reported at the Qalandia checkpoint and in Abu Dis, both north of Jerusalem.

In Ramallah, dozens of young people took to the streets and marched, chanting slogans in support of Nablus and the 'Lions' Den'.

Later in the morning, protests turned into confrontations with Israeli soldiers in several locations around Ramallah.

As the city's businesses remained closed and streets empty as part of the general strike observed in the West Bank as a sign of mourning, local media announced that a sixth Palestinian was treated for serious wounds sustained during protests in Nabi Saleh.

Qusai Tamimi was confirmed dead by the Palestinian health ministry around 9:00 am, rising the number of Palestinian fatal victims of Israeli violence to six. Before noon, Tamimi was wrapped with a Palestinian flag, carried on shoulders through the streets of Nabi Saleh, followed by crowds of Palestinians chanting slogans.

"He was a joyful boy, always smiling," his mother said as she sobbed in front of media cameras, dressed in black, surrounded by her daughter Malak and other women from Nabi Saleh, all dressed in black as well.

"May God have mercy on his soul; he only dreamed of a free Palestine," she exclaimed.

Since the beginning of 2022, Israeli forces have killed 132 Palestinians in the West Bank, including 19 minors, according to the Palestinian health ministry