It's taken until Netanyahu’s new far-right government for some to acknowledge Israel’s crimes against Palestinians, but these violations of international law have long existed. Rami Khouri explains what must shift to challenge the current trajectory. 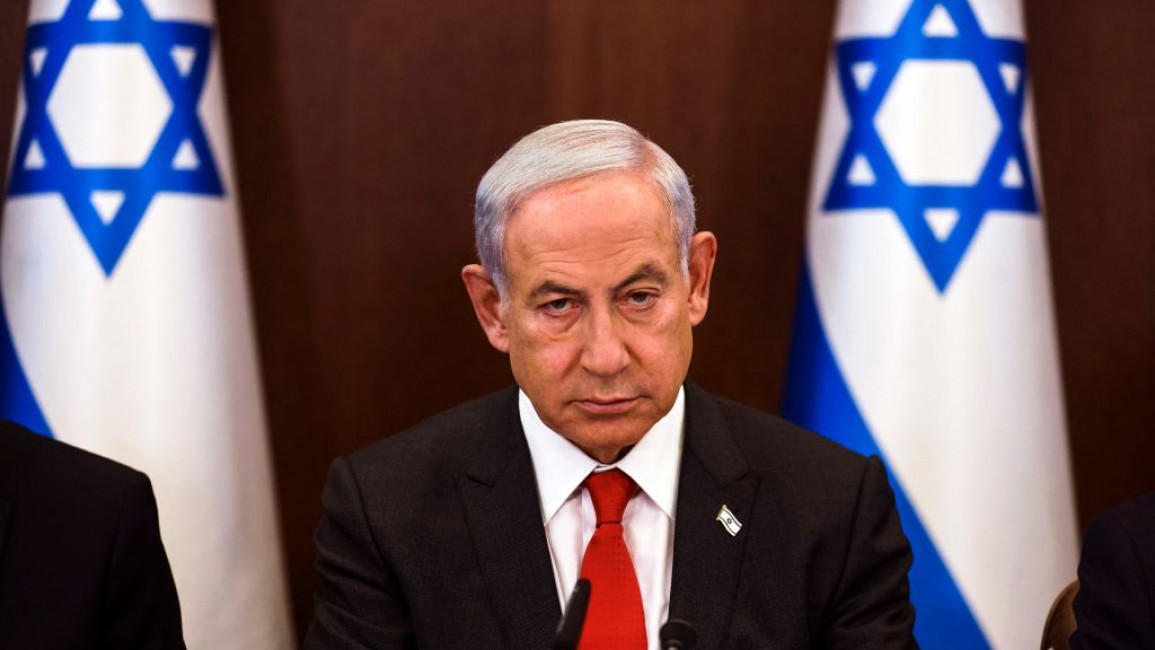 "The Jewish people have an exclusive and inalienable right to all parts of the Land of Israel," declared Israel's new far-right government in its guiding principles. [GETTY]

Prime Minister Benjamin Netanyahu’s new right-wing Israeli government has quickly launched policies that take Zionism to new heights of cruelty and brutality against anyone it considers a foe. This primarily means Palestinians, but also anyone else who defies the new rules of exclusivist, ethno-nationalist Jewish supremacy.

Four parties among Israel’s foes and friends alike must decide if they will complacently watch this political freak show, or check Zionism’s accelerated leap to complete its colonisation of all Palestine. These four are Jewish communities globally; states and movements around the world that support Israel with no questions asked; the post-WWII, UN-based rule of international law and human rights; and, the Palestinian people, who are now essentially leaderless.

Netanyahu wasted no time to say that his government would operate on the basis that, "the Jewish people have an exclusive and inalienable right to all parts of the Land of Israel." The message was clear to Palestinians and many other targets of his racist views: His coalition’s members and supporters on the extreme right would enjoy full rights and freedoms to do as they wish with the Palestinian land and people.

''The Netanyahu government’s vindictive measures are not new, but are only more intense variations of Zionist and Israeli policies that have existed since the 1910s. Zionism today simply reveals its full, true face that it had previously camouflaged under the soothing lies – such as being the region’s “only democracy,” or turning a barren desert into a garden.''

Others who will suffer in Israel include anyone who raises a Palestinian flag or throws stones to protect themselves, African asylum seekers, and LGBTQ people. Israeli soldiers even beat up young Palestinians who were celebrating Morocco’s victories in the World Cup.

Israel’s policies that demean and dehumanise Palestinians living under occupation, ultimately aim to expel them from their ancestral homeland. The catalogue of these policies includes routine, almost daily, steps to arrest, wound, and kill children, detain thousands of men, women and youth without charge or trial, demolish scores of homes and occasional entire villages, allow out-of-control Jewish settlers to cut down Palestinian farmers’ olive groves, and expand Jewish settlements or even outright annex occupied Palestinian lands.

Alongside all this, hundreds of Palestinians were refused travel permits for urgent medical care; Christians in Gaza were denied travel permits to go to Bethlehem to celebrate Christmas; scores of farmers’ applications to drill water wells were denied; endless military check points humiliate people every day and add hours to their daily commutes; and Israeli soldiers dressed for combat routinely detain children or take their toys away from them.

Such brutality is now well documented by Palestinian, Israeli, and international human rights and anti-apartheid organisations. Recent reports show that last year Israel arrested 7000 Palestinians, including 865 children; held 866 people in administrative detention without charges or trial; killed 146, including 54 children; wounded 958; demolished the homes of 960 Palestinians; and approved 4400 new Jewish colonial-settler homes in so-called ‘illegal’ settlements that were not formally sanctioned by the state.

It is important to bear in mind that all these acts are prohibited under existing international law and human rights regimes.

For what purpose? Not security, surely, but perhaps because this is the only way that settler-colonialists know how to behave in the face of a people they are trying to cleanse from the land.

In the first two weeks of 2023 Israel shot dead 14 Palestinians, ordered the eviction of a 1000-strong Palestinian community from its ancestral villages south of Hebron, imposed new travel restrictions on West Bank, Gaza and Jerusalem residents, and provocatively sent a firebrand Zionist minister to visit Jerusalem’s Aqsa Mosque compound, the most sensitive political/religious spot in all of Palestine.

Yet, frightening as all this is, two other aspects of Israel’s behaviour reveal the full scale of today’s challenges.

First, the Netanyahu government’s vindictive measures are not new, but are only more intense variations of Zionist and Israeli policies since the 1920s. Zionism today simply reveals its full, true face that it had previously camouflaged under soothing lies and diversions – such as being the region’s “only democracy,” or turning a barren desert into a garden.

Second, for the past century, leading world powers have ignored, passively accepted, or actively supported Zionist and Israeli settler-colonial policies in Palestine, which are now routinely called out as apartheid by leading international, Israeli, and Palestinian human rights organisations. The Netanyahu government’s cruelty is not an aberration by just one part of Zionist Israel, but rather the culmination of over a century of settler-colonial ravages in Palestine at the hands of Israelis and their foreign supporters, especially the UK and US.

So in the months ahead, we will monitor if Israel’s behaviour elicits any tangible reactions from world powers and the United Nations-based system of international law and human rights, two critical parties that must react to ever more vicious Zionist extremism.

If Palestine continues to wither under Israel’s stifling occupation that intensifies by the week while remaining unchecked by global powers, then no people anywhere are safe from similar fates when foreign powers empower, arm, and protect a local colonial predator.

It might explain why this, rather than Ukraine, might be the actual moment of reckoning for any new global order. For Palestine captures, better than any other place in the world, the past 200 years of global militarised colonial assaults that persist today.

Any person who wants to observe how colonial violence subjugates and tries to remove from history another people can now watch live on television and social media Israel’s killings, mass arrests, beatings, expulsions, home demolitions of Palestinians, and continuing forcible expropriations of their land.

No wonder that large crowds across the world routinely march in the streets – or wave the Palestinian flag at sports events – to support the Palestinians. People throughout the South feel the same colonial wounds and pain that they see inflicted daily in Palestine, since many of them have experienced similar colonial assaults by the same global powers that have enabled Israel’s apartheid.

The world’s Jewish communities are the third pivotal actor that must respond to Israel’s vicious behaviour. Many Jews have already expressed concerns, including a few Israeli officials who resigned.

This community has repeatedly proven that it can influence policy in Israel and abroad. A century ago, European and American Jews mobilised effectively, if duplicitously and often behind closed doors, to win political support in London and Washington for the creation of a Jewish Israel in a land that was 93% owned and populated by Arab Palestinians. World Jewry’s prevalent inaction ever since, though, has allowed Netanyahu’s Israeli Frankenstein government to see the light of day, and to claim to speak for all Jews in the world.

Will Jewish communities once again mobilise powerful political coalitions in the West – but this time to halt Israel’s fascist tendencies, and perhaps to help spark a genuine peace negotiation that satisfies all?

Critically, we must keep in mind the continuing Arab and international consensus to negotiate a permanent peace that affirms equal rights and security for adjacent Israeli and Palestinian states and all their citizens.

The Palestinians are the fourth community that must respond to Israel’s new threats. Their best option to achieve a permanent peace that resolves their 75-year-long dispossession remains forming a single, strong, non-corrupt government that represents all political factions. This could join forces with a rejuvenated global rights-based order and millions of righteous Jews to harness the immense, but largely passive, international support for a sovereign Palestinian state alongside Israel.

How these four groups react to Netanyahu’s government will shape the Middle East for years. Whether they work for justice and law, or sink in hapless acquiescence to long-term Zionist apartheid, will send a loud signal to other vulnerable communities around the world on a central question of our times: Will Western and other settler-colonial ventures, like Israel, finally transform into a new order that offers equal rights for all, like in South Africa? Or will others suffer the same degradation and pain that have plagued Palestinians for a century now, and that just took a frightening leap forward this month?

Khouri
https://twitter.com/RamiKhouri
Recent Articles
Biden-Putin, colonial legacies, and MENA's three divides
01 Aug 2022
The worst is yet to come for the Arab world
24 Dec 2021
Lebanon and the crisis in wider Arab statehood
19 Jul 2021
The New Arab at 7: A media revolution for modern times
01 Jun 2021
View More
More in Opinion