Palestinians fear the impact of Ben Gvir’s appointment as National Security Minister, given his far-right history and what this will mean amidst considerable violence already meted out by Israel, writes Yara Hawari. 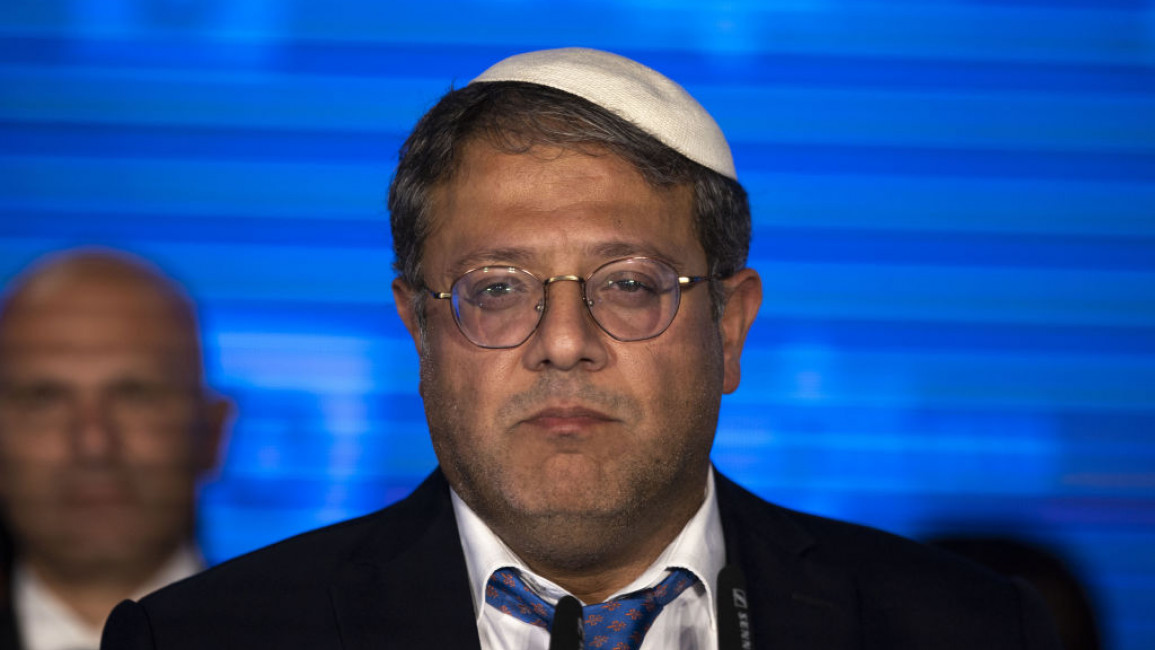 Itamar Ben Gvir was born in 1976 to Iraqi Jewish immigrants. As a teenager, he joined Kakh – an extremist Zionist movement led by the American Jewish rabbi and convicted terrorist Meir Kahane. The ideology of Kakh was a mixture of religious Zionism and anti-Arab violence, which openly advocated for ethnic cleansing not just in Historic Palestine, but also beyond.

Following the 1994 massacre at the Ibrahimi mosque in Hebron by Kakh supporter, Baruch Goldstein, both the Israeli regime and the US State Department designated Kakh as a terrorist organisation. Ben Gvir, still an avid Kahane supporter, was known to hang a portrait of Goldstein in his living room – he apparently took it down once he started making a bid for the Knesset. In 2007 he was convicted for supporting a terrorist organisation and inciting racism in the streets of Jerusalem. He has since been involved in various violent incidents including in 2021 where he pulled out a gun on a Palestinian parking attendant in Tel Aviv.

''He is already having a palpable effect on Israeli soldiers in the West Bank. Not long ago, a soldier was filmed saying to a group of activists in Hebron: 'Ben Gvir is going to sort things out in this place…That’s it, you guys have lost … the fun is over.' Shortly after, another soldier from the same unit assaulted an Israeli activist. Unsurprisingly Ben Gvir came to their defence when both soldiers were temporarily suspended in a rare display of disciplinary action.''

Whilst Ben Gvir was a fringe political figure in Israeli politics not long ago and even regarded by many Israelis as an extremist novelty, in a short space of time, his crass and racist rhetoric has gained him an adoring following of mostly young fanatical West Bank settlers.

In the November 2022 Israeli elections, Ben Gvir managed to win a record 14 seats for his party and made his way into the governing coalition with Benjamin Netanyahu. As part of the coalition agreement, Ben Gvir has been given the expanded ministerial file of National Security Minister. This new position merges the responsibilities of the minister of public security with the Negev and Galilee Development Ministry and the Jewish Heritage Ministry.

In the past, Ben Gvir has called the Negev and the Galilee “the wild west” because of its majority Palestinian populations and one of his campaign promises was to restore “security” in these areas. There are reports that a “security operation” in the Negev is already being planned.

Indeed, his feelings towards Palestinian citizens of Israel are well recorded and range from all out expulsion to forced declarations of loyalty to the state.

Ben Gvir’s new portfolio also includes heading the 2000 strong Israeli Border Police unit in the West Bank. Known colloquially in Hebrew as the Magav, the force was established in 1953 to fight what the new settler colonial state called “infiltration”. In other words they prevented expelled Palestinians trying to make it back to their homeland. Over the years, their duties were expanded from securing borders to “counter-terrorism” operations and Israeli law enforcement in the West Bank and East Jerusalem.

Notably, the Border police was responsible for the Kufr Qassem massacre in which 48 Palestinian citizens of Israel were killed. They also include units of Mistaravim, undercover agents that disguise themselves as Palestinians in order to infiltrate, arrest and even assassinate. These units pre-date the establishment of the state of Israel and were used by Zionist terrorist groups, notably the Palmach, to infiltrate Palestinian communities and gather intelligence which would later aid in the 1948 ethnic cleansing of Palestine.

Today the border police comprises 8000 personnel, 2000 of which are stationed in the West Bank. They are notoriously well trained and in the last decade it has become the most popular unit in the Israeli regime forces for new recruits.

Ben Gvir at the helm of this unit has left many within the Israeli security establishment worried. Former minister of defence and accused war criminal Benny Gantz warned that Ben Gvir would turn the border police unit in the West Bank into a private militia. Similarly former police commissioner, Ron Alsheich claimed he would have resigned if he was still in the position, calling Gvir “a huge danger to the personal security in the State of Israel”.

Gantz, Alsheich and others share the fear that Ben Gvir will turn the Israeli regime into a police state for its Israeli Jewish citizens.

He is already having a palpable effect on Israeli soldiers in the West Bank. Not long ago, a soldier was filmed saying to a group of activists in Hebron: “Ben Gvir is going to sort things out in this place…That’s it, you guys have lost … the fun is over.” Shortly after, another soldier from the same unit assaulted an Israeli activist. Unsurprisingly Ben Gvir came to their defence when both soldiers were temporarily suspended in a rare display of disciplinary action.

Meanwhile and more importantly, Palestinians living under Israeli apartheid are fearing an even more violent order in the West Bank with soldiers and settlers emboldened by Ben Gvir’s particularly violent rhetoric. This year has already been the deadliest year for Palestinians in the West Bank since 2005, with more than 145 killed by Israeli soldiers including at least 37 children. Earlier this month a video circulated on social media that showed an Israeli soldier shooting and killing a young Palestinian man – Ammar Mufleh – at point blank. Ben Gvir shortly after called the soldier a hero and congratulated him on a job “well done”.

Whilst it remains true that Netanyahu’s new coalition is simply a changing of the prison guards for Palestinians, the conditions of the prison are about to get ten times worse. Ben Gvir’s inclusion in the Israeli government and appointment as National Security Minister ushers in a new reign of cruelty for Palestinians, not only for the West Bank, but also beyond.