Salah Hammouri from prison: The persecuted speaks up and does not apologise

Salah Hammouri from prison: The persecuted speaks up and does not apologise
Perspectives
5 min read

Detained by Israel and threatened with deportation, Palestinian human rights lawyer writes from prison a letter of defiance, refusing to apologise for standing up to the occupation and colonisation of his homeland. 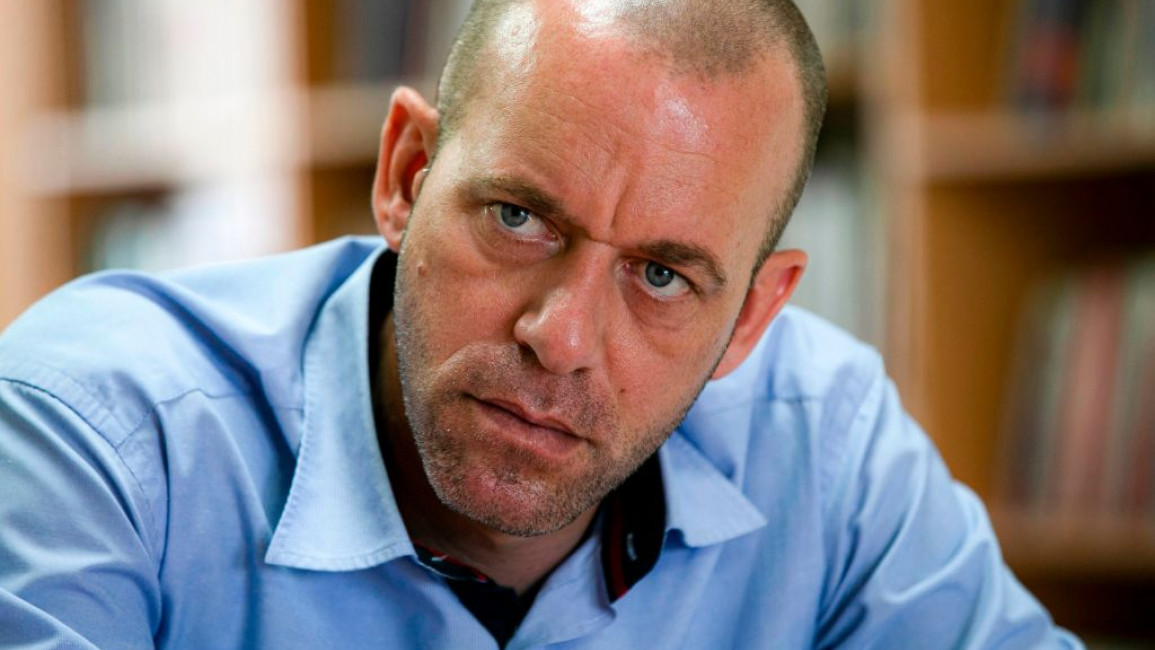 Israeli Interior Minister Ayelet Shaked ordered the deportation of a jailed Palestinian human rights lawyer Salah Hammouri. He writes that this is Israel's 8th attempt to expel him. [GETTY]

This was written in November by French-Palestinian human rights defender Salah Hammouri from his cell in Hadarim prison. Salah has been held without charge by Israel since March this year when he was arrested in his home in Jerusalem. Since then, Israeli Interior Minister, Ayelet Shaked, reaffirmed her decision to revoke his residency and earlier this month, and he faces imminent deportation to France.

This is the latest in Israel’s longstanding judicial harassment of him.

Update: Hammouri was deported on Sunday 18 December, days after this article was published.

These were the words I woke up to at 4:00am, finding myself surrounded by 15 heavily armed members of the ‘Yamam’ force (Israel's National Counter Terror Unit). For a brief moment, the green lasers emitting from their assault rifles were the only illumination in an otherwise dark room. When the lights eventually came on, I realised I was awakening to a reality which the Israeli occupation excels in creating.

In this reality, Fairouz’s voice is replaced by the sound of plastic handcuffs locking hands together, informing you that your journey has begun.

This is their eighth attempt to expel me.

In their sixth attempt I was arrested and held under ‘administrative detention’, detained with neither a trial nor reason. In the seventh, I was put under house arrest and my family was forcibly deported from our homeland. This time, they revoked my Jerusalem identity card.

🚨Update 9 Dec
1/5 Today, the minister of Interior Ayelet Shaked refused the arguments put forward by Salah's attorneys on 6 Dec & decides that there is no need to change the decision of the deportation of Salah, neither does she see any reason to reconsider the current detention

These are the means of forcible expulsion, of gradual uprooting from my land, my home, my social surroundings, my history in this place.

But these are not my memories alone, but those of a people whose Nakba has not ceased since 1948, experiencing daily arrest, expulsion, surveillance, monitoring, harassment, killing and displacement. I am therefore both the individual and the collective, I am the prisoners and the homeland.

This settler-colonial project wants your land without you on it, confiscates your dream, destroys your reality, tries to deny your memories, whilst accusing you of terrorism and vandalism. It attempts to wear you down, to strip you of your very humanity and to subjugate you by all available methods, even holding you responsible for the murder, torture, persecution and harassment they visit upon you daily.

It turns you into a site of experimentation for their weapons, old and new, and for their means of surveillance and suppression.

Even our mobile phones do not escape the comprehensive control of Zionist colonialism, a fact I discovered for myself last year. Me, my people, my family, our land, our identity, our culture and our memory are all comprehensively targeted.

You no longer have an ID card demonstrating that you are a Jerusalemite Palestinian by birth and identity, but why should you need such a certificate?! It is the alleys of the Old City and the neighbourhoods of Jerusalem, its soil, its walls and its people that provide this identity and belonging.

Israel can exile you to the West Bank, or deport you like those they expelled in 1948. You may be divided between the Palestinians of the outside and those of the inside, between those on the land occupied by Israel in 1948 and those in the West Bank, and between Jerusalem and Gaza.

Each sub-group has adopted a culture and identity, and its borders are the borders of our geography – the geography of colonialism mobilised against Palestine’s ancient Arab identity. It’s a geography that creates fragmenting ideas and visions, and divides one group into several smaller ones, imposing customs that seek to annihilate a people and their cause.

They do not guard a sacred fire, but guard a crime.

This geography prevents a love story between a young man and a young woman, destroying human connections. It tries to produce a new identity on this basis and a culture defined by a limited political ‘solution’, a shackle and a barbed wire one is forbidden to cross.

However, as we have always said, we will hold back oblivion and challenge those who try to impose it on us. The reality they enforce cannot prevent our will to come together, our power of belonging: it cannot defeat our identity.

We challenge them everywhere, and still believe in a national project of one people, one cause and total resistance - based on the principles of mass participation - that fights for liberation from this geography of colonialism.

Wherever a Palestinian goes, he takes with him these principles and the cause of his people: his homeland carried with him to wherever he ends up.

I am still waiting, and perhaps I will be deported and forced to confront this first-hand. But homeland, belonging, and challenging Zionist settler colonialism do not need an identity card. They need political consciousness, a sense of oneself and a project, a will, and vision.

Each of us faces these same challenges from our own position and place in the world, always confronting and resisting. For this we do not ask permission and do not apologise.

Salah Hammouri is a French-Palestinian human rights lawyer and a native Jerusalemite. His residency status was officially revoked by Israel's interior minister, Ayelet Shaked, in October 2021 under the pretext of a "breach of allegiance to the State of Israel." Following his arrest in March, he now faces deportation to France.