To save Egypt's economy, the kleptocratic regime must end
Voices
6 min read

Facing its worst financial crisis in modern history, the memories of revolution in Tahrir Square 12 years ago feel far removed from the realities of Egyptians today. The blame, writes Sam Hamad, lies with the Sisi regime. 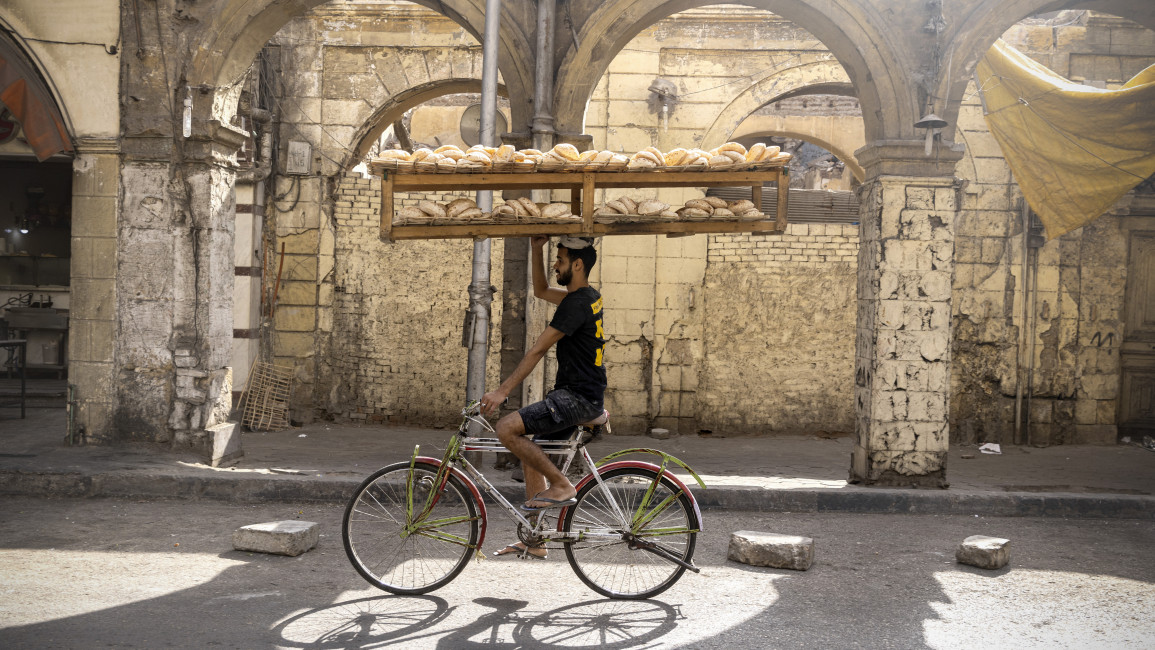 Since the beginning of 2022, the Egyptian pound has lost more than 60 percent of its value against the dollar, as millions struggle to afford basic goods. [Getty]

It’s with some irony that just over a week away from the 12th anniversary of the January 25th revolution that ejected Hosni Mubarak from power, Egyptians find themselves in a more economically precarious situation than at any time in recent history.

The headlines in the Western media regarding Egypt will be heavy on statistics and economic jargon. It’s all about the Egyptian pound weakening by over 13%, losing half its value since March, while inflation soars to 21.9%. But what does this actually mean for Egyptians?

In Egypt, two out of three people now live on government-subsidised food, a record high since Egypt’s independence. Without this, many families would starve – it is literally all that stands between millions of Egyptians and starvation.

Yet, for many, the subsidies aren’t enough. Due to soaring food costs, Egyptians are having to sacrifice items that would be part of their regular consumption. For low-income families, subsidised food is being consumed by the start of the month, leaving them scrambling for sustenance a few weeks in. Among the most vulnerable, hunger is already setting in.

"It’s of course perfectly true that these unprecedented events are the immediate catalyst for the Egyptian currency crisis, but they only tell one small part of the story"

If you were to glance over the headlines, you would think Egypt was perhaps just another unlucky ‘developing’ African country. You might think that its current catastrophic economic situation is due to a confluence of coincidental factors – namely, the economic instability caused by the war in Ukraine and Covid-19.

It’s of course perfectly true that these unprecedented events are the immediate catalyst for the Egyptian currency crisis, but they only tell one small part of the story.

In the narrative of Egypt’s political tragedy, the Sisi regime is the main villain. When Sisi first came into power, leading a mass-murderous military coup against the elected president Mohamed Morsi, he preached the need for economic stability. As is the case following any transfer of power, Egypt had suffered from economic instability in the years after the revolution of 2011.

The Supreme Council of the Armed Forces seized upon such instability and, given they still retained mass state and private economic power, exacerbated them in a deliberate act of sabotage. Their key message to Egyptians was that democracy is synonymous with instability. Sisi vowed to bring economic prosperity and craft a new future for Egyptians.

It was all, of course, a litany of lies and propaganda. Egypt’s economy is on the verge of ruin and the life of the average Egyptian has never been so insecure. The Sisi regime never had any intention of progressively reforming the Egyptian economy to benefit ordinary Egyptians.

What Sisi really intended was to erase democracy as a means to bolster and expand the status quo of the Mubarak regime. This meant the maintenance of Egypt’s vast black hole of a kleptocracy, wherein billions of vital public funds are syphoned off into the pockets of regime supremos, while the military owns and operates vast sections of the economy.

The rest of the Egyptian economy is mostly operated by businessmen favoured by the regime, in what is a system of patronage common to most authoritarian regimes.

However, given the context of the Arab spring and January 25 revolution, the Sisi regime, and its powerful allies in the UAE and Saudi Arabia, feared the institution of democracy in the largest Arabic-speaking country.

With Gulf money bailing him out, Sisi could focus his attention on one thing he has excelled at: conducting a widespread and draconian crackdown on his political opponents, critics and democratic reformers.

In return for the UAE and Saudi underwriting this reign of terror, Sisi opened up the Egyptian economy to his Gulf allies. As late as last year, Riyadh and Abu Dhabi were launching ‘investments’ with Egypt, which has mostly meant the regime selling off state assets to the foreign powers.

Alongside this, Sisi has recklessly spent billions on grand projects while the basic functions of the state and the needs of every day Egyptians are painfully neglected.

Even before Ukraine and the pandemic, Egypt had to plead with the IMF for loans to keep the country afloat – loans that entail normal Egyptians being targeted with crippling austerity measures.

"Now, it should be obvious that every loan is merely putting a band aid on what is a potentially mortal wound"

Now, it should be obvious that every loan is merely putting a band aid on what is a potentially mortal wound.

Even the IMF has had to confront this terrifying reality. In its latest bail out plan for Egypt, an extension to a previous $3 billion loan, the Fund has, for the first time, demanded ‘structural reform’ to ‘military-owned enterprises’. For Sisi, this presents a risk, as opening up those parts of the economy might empower those who he can’t control.

If anything, Sisi will probably only open up some military-owned parts of the economy to more regime-allied kleptocrats or the UAE and Saudi. This may have some short-term benefits, but at most will simply keep Egypt hovering over the abyss.

Ultimately, Egypt has to face up to the reality that its entire political system is the reason that the country is not only susceptible to catastrophe, but forever mired in stagnation and impoverishment.

In Sisi's Orwellian Egypt, no one is safe

The only long-term hope is legitimate democratic reform, but with Sisi creating a near-totalitarian order in the country, the voices of reform and change are smaller than ever before.

January 25 might not yet be forgotten, but it may only be remembered as a crossroads moment for Egypt, one where the path of democracy and stability was spurned for the slow, arduous road towards collapse.

In a world economy defined by volatility, Egypt’s kleptocracy is one of the weakest, though biggest, links. A country of 104 million people straddling the line of becoming a failed state would have destructive ramifications for the whole world.

Sam Hamad is a writer and History PhD candidate at the University of Glasgow focusing on totalitarian ideologies.