Ben Gvir’s ban of the Palestinian flag is the latest attempt to repress Palestinians, but it is nothing new for Israel. Until the settler colonial system is uprooted in its entirety, such attacks will certainly continue, writes Dana El Kurd. 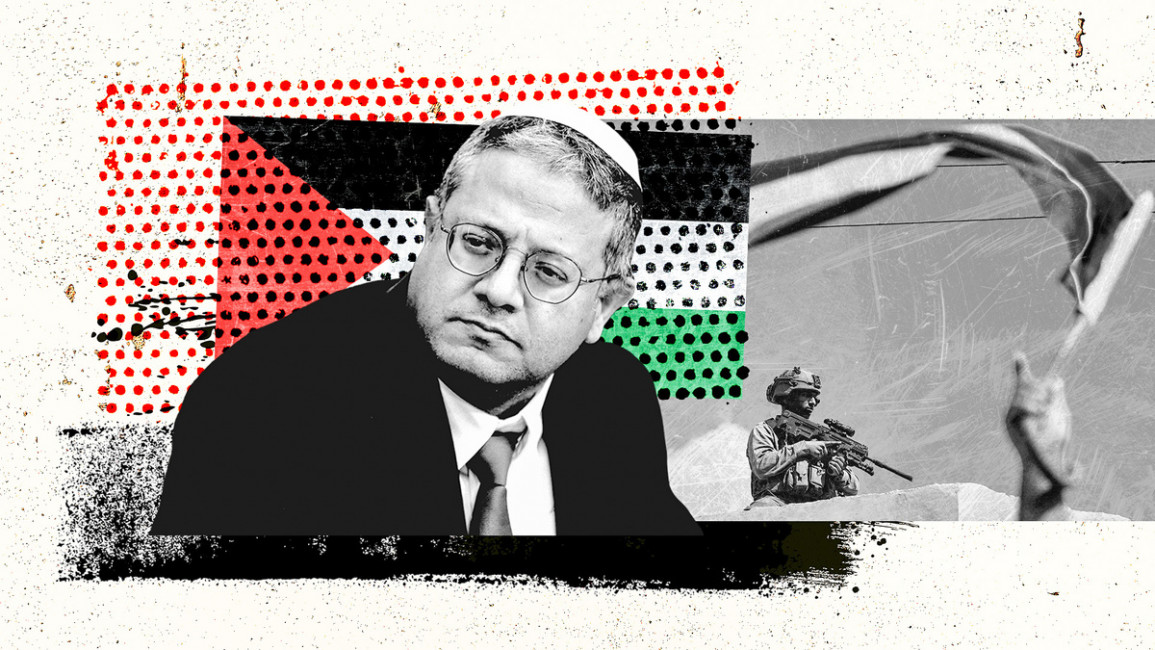 When Ben Gvir storms the Al-Aqsa compound, or bans flags, what he is doing is proceeding lockstep on his goal of domination, writes Dana El Kurd.

In the latest provocation by the new Israeli government, Minister of National Security Itamar Ben Gvir ordered Israeli police to prohibit the flying of the Palestinian flag. In yet another denial of the Palestinian people’s existence, Gvir is again signalling the level of confrontation he is willing to engage in, all to repress the Palestinians and their national identity.

This latest step is also intended to be a rebuke of the (dwindling) left in Israel, which recently marched in Tel Aviv against the new government, and had some small contingents holding Palestinian flags.

But truthfully, all this changes little for Palestinians. Ben Gvir is indeed more thuggish and crass than previous ministers. As one Israeli analyst put it, he comes to the Knesset with an express objective of suppressing Palestinians, and his statement in the aftermath of the latest Israeli election makes this clear: “The time has come to be the masters of our house in our country.”

''The reality is that this is not an aberration. The issue with Israeli repression is not that the new government officials go too far, yell too loudly, and brandish weapons too directly. The repression we are seeing is merely another manifestation of a system built on the domination and erasure of Palestinians. And Palestinians have been naming this system of settler colonialism since its inception.''

Nevertheless, even under his predecessors, Israeli police, border security forces, and military confiscated flags, using this as a pretext to beat and shoot at protestors. Israeli authorities have always had this power, which they’ve been allowed to apply whenever there is a perceived “threat to public order.”

Given the level of impunity that Israeli soldiers operate with, there was never really a chance that any confiscation would ever be challenged.

This latest prohibition of the flag is just the tip of the iceberg. The world watched, during the events of the Unity Intifada, how Israeli soldiers put their hands on Palestinian protesters’ necks, rained their fists down on Palestinian women, and ripped flags from Palestinian children’s hands. They watched the assault on Gaza.

Since then, Israel has launched “Operation Break the Wave,” which led to increased funding for Israeli police, resulting in 2022 being the deadliest year for Palestinians in the West Bank.

All of this took place before Ben Gvir even became a minister in the new fascist government.

So while the latest repression should, of course, be highlighted and condemned, liberals in Israel, the US, and Europe who use this turn of events to pin everything on the new Israeli government, and the vulgar Ben Gvir, should not be excused.

The reality is that this is not an aberration. The issue with Israeli repression is not that the new government officials go too far, yell too loudly, and brandish weapons too directly. The repression we are seeing is merely another manifestation of a system built on the domination and erasure of Palestinians. And Palestinians have been naming this system of settler colonialism since its inception.

Frankly, it is suffocating to have to keep saying it.

Nevertheless, the ascension of Ben Gvir to power should serve as a moment of reflection for people outside of Palestine, especially those who consider themselves allies. When Ben Gvir storms the Al-Aqsa compound, or bans flags, what he is doing is proceeding lockstep on his goal of domination, and trying to gauge how far his movement can go before there are any real consequences.

Thus far the international community has, unsurprisingly, demonstrated to the Israeli far-right that consequences will not be forthcoming – their statements of concern aside.

Thus allies, and liberals who profess alarm over what happens in Palestine, should take this moment to interrogate their positions. If this is yet another manifestation of a system of domination, as every indication proves to be the case, then liberals should recognise that limited condemnations of this or that government, or this or that policy, is a wasted effort.

At some point, they have to look the reality of this system in the face. It is easy to make a villain out of Ben Gvir, or Netanyahu, and pretend that the issue lies with these individuals. It is harder, but more honest, to realise that the system itself must be condemned.

Until this is clear, Western liberals will continue to skirt around what must be done, and then react with shock each time the system generates even greater brutality. It is no wonder that Palestinians have lost interest in the international community, or in their supposed allies abroad.

Dr Dana El Kurd is an Assistant Professor of Political Science at the University of Richmond. She is the author of "Polarized and Demobilized: Legacies of Authoritarianism in Palestine" (Oxford University Press, 2020). Dr El Kurd's work focuses on authoritarian regimes in the Arab world, state-society relations in these countries, and the impact of international intervention.

Opinions expressed here are the author's own and do not necessarily reflect those of The New Arab and its editorial board or staff.