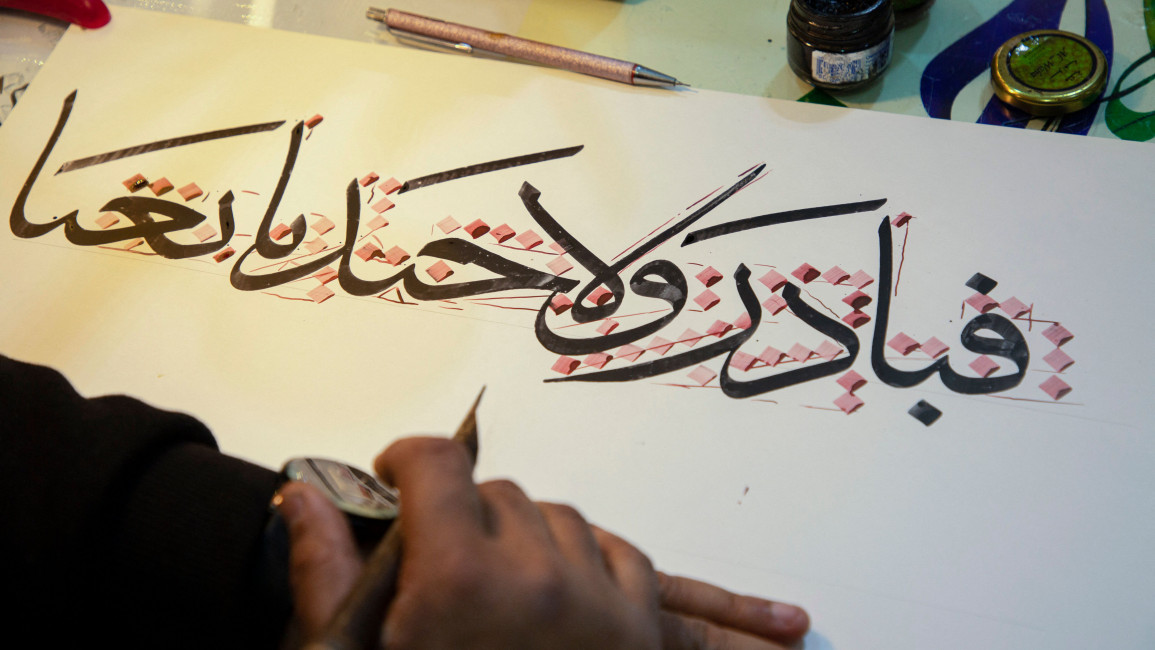 Iraqi calligrapher Wael Ramadan uses a stylus to produce a sample of Arabic calligraphy at his workshop in al-Ashar district of Iraq's southern city of Basra on December 21, 2021. [Getty]

Every few months, an article bemoaning the death of the Arabic language emerges, whether in its spoken forms or as Modern Standard Arabic (MSA). The demise is commonly attributed to the dominance of English.

As we know, imperialist hegemony is always accompanied by cultural hegemony, the first target of which is language. Kenyan writer Ngũgĩ wa Thiong'o said, “In colonial conquest, language did to the mind what the sword did to the bodies of the colonised.”

Language is a vessel for culture, the light which illuminates the house of heritage. By severing a people from their language, you sever them from their sense of self and fracture their historic continuity as a people.

A common defence against the claim that English is killing Arabic is how the latter continues to be the everyday language for the majority of the 400 million inhabitants of the MENA region. In fact, the “problem” of Arabic no longer being spoken seems to afflict only a certain class of Arabs, namely those with access to private, “Western” education.

"Too often the fact that only English being heard at a cocktail party on some rooftop in Dubai is taken as proof positive of Arabic’s demise. It’s a myth"

Too often the fact that only English being heard at a cocktail party on some rooftop in Dubai is taken as proof positive of Arabic’s demise. It’s a myth; the death of Arabic will not be as a result of the proliferation of English.

On the contrary, what if the danger to Arabic is coming from inside the house?

In the run-up to the Cairo International Book Fair, from 24 January to 6 February, a new translation of Hemingway’s The Old Man and the Sea is causing a stir. Rather than the usual translation into MSA, the classic text has been rendered into Egyptian Arabic.

Some celebrate this translation, arguing that Egyptian ought to be viewed as a language in itself as it’s widely spoken and represented across film and music. Others criticise the translation for privileging the Cairene dialect over those spoken in the Delta regions or countryside.

The Old Man and the Sea isn’t the first English text to be rendered into Egyptian. In the late 1990s, psychoanalyst Moustapha Safouan translated Shakespeare’s Othello into Egyptian Arabic, putting into practice his belief that the political and social angst of the Arab world reverts to the fact that our “mother tongues” aren’t set down in writing.

.@MahyouSania unpacks how the word and spirituality behind ‘mektoub’ has been misused by people with power to justify certain actions vis-à-vis the lesser fortunate 👇 https://t.co/ul4AKjKMGt

In Why are the Arabs Not Free?, Safouan advances the controversial thesis that Arab advancement requires embracing our spoken dialects as written languages. Using Dante’s Divine Comedy as an example, he claims that Egyptian is to Arabic what Italian is to Latin. In other words, for him, Arabic is already a dead language insofar as it has little utility for most people.

Safouan argues that composing literature and other “highbrow” intellectual output in vernaculars will enable what he calls the “illiterate masses” access to complex ideas, which are then circulated, debated, and further developed. This process ultimately drives civilisational progress.

There are a few holes in Safouan’s theory. In comparing Arabic to Latin, what he had in mind was almost certainly the Classical Arabic (fusha) that was standardised in Islam’s Golden Age, rather than its descendant, MSA — today’s language of public education, news media, and official documentation.

To say this language is dead is to say that the average person in Beirut or Alexandria can’t understand a radio broadcast or decipher the front page of their local newspaper. To assert that literature in this language remains unavailable to the masses is to ignore the fundamentally oral nature of cultural transmission in the Arab world. Throughout our history, we have been a people — perhaps to our ultimate detriment — who excel at recitation.

Gaelic, Arabic and the decolonisation of Ireland & Palestine

Whether through the poems of Mutanabbi, Al-Farid, and Al-Ma’arri, hakawati told late into the night, or recitations of Quranic verses and hadith, the Arabic language has always been present in the consciousness of the masses — whether they were literate or not.

In more contemporary times, we find that the “highbrow” work of Khalil Gibran, Nizar Qabbani, and others was given mass appeal through the music of Umm Kulthoum, Fairouz, and Abdelhalim Hafez.

But perhaps Safouan’s larger error is in conceiving of Egyptian as a language, rather than a dialect of Arabic. What does it mean to call something a language? What is at stake for us, as Arabs, in this distinction? What are the knock-on effects of concretising Egyptian (or any other dialect) as a written language?

Written languages demand codification, a process involving agreement on syntax and grammar, standardised spelling, and other considerations. You may counter that a Saudi understands the Egyptian in a pop song or spoken by a colleague, so why wouldn’t they understand a novel composed in it? The issue is in the codification. This is the mechanism that has the power to divorce our Arab dialects from their common source, and in time, to strip us of our shared Arabness.

"With time, it’s not difficult to imagine a situation where an Egyptian novel would need to be translated to Emirati or a Tunisian text into Iraqi"

Presently, Arabs understand one another’s dialects because we can trace words back to their common root in MSA, but if dialects become codified in written form, then these common roots may be lost. This is particularly aggravated by phonetic spelling.

For example, the word ظلم (injustice) is pronounced thulm in the Kuwaiti dialect but in Egyptian it’s pronounced zulm. And yet, when a Kuwaiti hears an Egyptian pronounce it that way, the word they both have in their mind’s eye remains ظلم, as they would see it in a newspaper.

But what happens when an Egyptian author decides to write it phonetically instead — as زلم — in their novel? We already see this sort of bastardised spelling across Twitter, where Arabs type out words phonetically according to their dialects, which sometimes requires a fair bit of effort to decipher.

But that’s the anarchic space of social media. What happens if spelling ظلم as زلم becomes the standard spelling in Egyptian Arabic? Published excerpts from the new translation of The Old Man and the Sea show that this is indeed what’s happened.

The future of learning Arabic in MENA post-pandemic

With time, it’s not difficult to imagine a situation where an Egyptian novel would need to be translated to Emirati or a Tunisian text into Iraqi. And if this practice is taken up by the media, educational institutions, and official bodies, then Arabic truly will be dead, taking with it our ability to relate to one another as Arabs.

Our shared Arabness, already under tremendous stress, would be lost forever.

Our common Arabic holds within it the commonalities of our heritage, a rich turath stretching back centuries and still produced today — in literature, poetry, philosophy, and art. Sociologist Halim Barakat says that language is not only “the embodiment of a whole culture” but also represents “a set of linkages across time and space.”

In fact, many scholars attribute the failures of Arab modernity to the rupture with the past that the nahda, the Arab Awakening of the nineteenth century, enacted. In the 1980s, Moroccan philosopher Mohammed Abed Al-Jabri opposed his intellectual peers and argued that the key to unravelling our present malaise and building a better future was in appreciating, critiquing, understanding, and re-assimilating our past rather than rejecting it in favour of European models.

"Our common Arabic holds within it the commonalities of our heritage, a rich turath stretching back centuries and still produced today"

It’s only by mending the rupture of the nahda that we can hope to advance in any authentic and lasting way.

Language operates on the psyche in deep and complex ways that are pivotal to identity and communal cohesion. Language reflects social reality, but it also has the power to shape it. If Safouan’s theory comes to fruition, if we lose our common Arabic, then the Western-driven project of nation building in the region will have succeeded beyond its wildest dreams.

The self-estrangement birthed by the nahda will be irreversible, we will remain exiled from ourselves, and our schizophrenic, failed modernity will be permanent.

Layla AlAmmar has a master's in creative writing from the University of Edinburgh, and she recently completed a PhD focusing on Arab women's literature and literary trauma theory from Lancaster University. She has published in The Evening Standard, the TLS, the Guardian, Lithub, Arablit Quarterly, and Aesthetica Magazine, where she was a finalist for the 2014 Creative Writing Award, and is the author of two novels.