The Greatest Story Never Told? Why we need to talk about Jesus' ‘blackness’

The Greatest Story Never Told? Why we need to talk about Jesus' ‘blackness’
Voices
6 min read

Jesus was one of the most important figures in history, his whitewashing has been used to justify white supremacy, colonialism and imperialism, this is why we must ‘tell the truth’ about him, argues Richard Sudan. 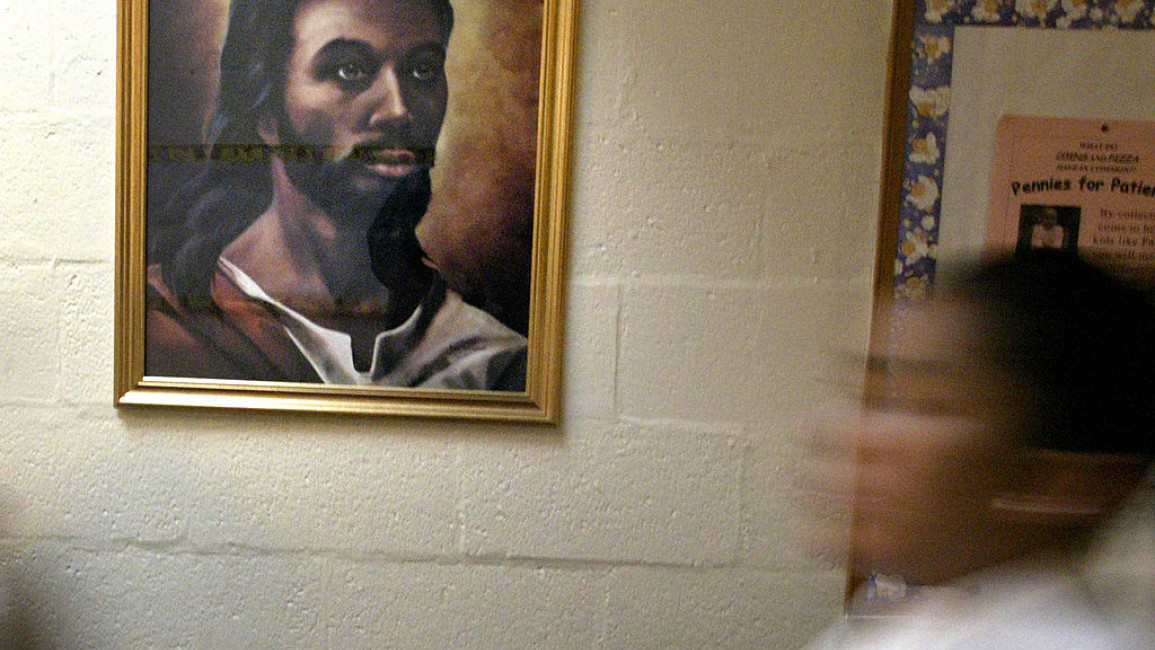 A painting of a black Jesus hanging up at Saint Margaret of Scotland Catholic school. [Photo by Mark Gail/The The Washington Post via Getty Images]

Jesus was a black Palestinian revolutionary, who was born in Africa. To some, this might seem a controversial statement, but when considering the facts, reaching such a conclusion is obvious.

Jesus was born in Bethlehem, Palestine, which at the time of his birth was considered part of North East Africa.

The term Middle East wasn’t coined until the 1850s after the creation of the Suez Canal by the British, long after the lifetime of Jesus.

Naturally, the appearance and characteristics of the people from Palestine at the time reflected the region of the world in which they lived.

Beyond the geographical reality of the holy land in the time of Jesus, there is also an abundance of evidence in the bible itself reflecting the fact that Jesus did not have classic European features as modern day depictions like to indicate, but was in fact a dark-skinned man with curly hair.

''During colonisation, Europeans took their white Jesus with them and used it to preach a doctrine of white supremacy. The notion of white superiority relied on God being represented as white. White deity was used to sell the myth of white superiority. Similarly black inferiority cannot stand up, if God is black.''

Scripture describes Jesus as having hair “like wool” and feet like “burnished brass” and looking at some of those among his lineage suggests that it is unlikely Jesus had white European features.

Rahab the harlot, Tamar, the Queen of Sheba were all of black ancestry and part of Jesus’ genealogy. Abraham too, was born in the city of a black man, Nimrod.

In the book of the songs of Solomon, Solomon says “I am black but I am handsome.”

There are numerous other references speaking to the blackness and African heritage of those in the lineage of Jesus. Let’s not forget too, that when Jesus fled persecution he hid in Egypt among black skinned Africans. What this means when testing the white Jesus myth, is that looking plainly at the available evidence; Jesus most certainly, did not look of northern European descent.

From Ethiopia to Russia many images of Christ reflect him as a dark skinned man. Prior to the European Renaissance it was more commonly accepted that Jesus had features in line with how the people in the region looked at the time. Different cultures eventually painted Christ in their own image, and Europeans were no exception.

What this meant, however, was that during colonisation, Europeans took their white Jesus with them and used it to preach a doctrine of white supremacy.

This thinking has persisted in Western society at least, which today remains reluctant to present Jesus as black or as a person of colour opting instead to depict him as one of their own.

While people might debate the best way to characterise Jesus, what’s certain is it is highly unlikely that he looked like the whitened Eurocentric depictions.

The big question is, 2000 years after his death, why does it matter?

A question of representation

Facts matter, but so too does representation.

Hollywood for example, with all its influence, is notorious for producing a majority of movies casting Jesus as a white man, decade after decade. At the same time, Hollywood also stands accused of readily profiting from films portraying black people negatively.

All of this of course is by design and is simply another example of a system operating as intended.

Countries like Britain and the US, which many define as Christian, cannot seem to grasp the notion that Jesus, who was a refugee, looked like the vulnerable migrants trying to enter Britain today, rather than the way he has been portrayed across history by the West.

Britain, which was barely able to accept that the oldest known remains in the country belonged to a black man, embraces white Jesus in the same way it denies or apologises for Winston Churchill’s racism.

White supremacy and racism depend on a number of falsehoods being maintained, and acknowledging Jesus as black means exposing and turning a system, and an entire way of thinking about that system, on its head.

Additionally, when considering the wider historical backdrop to the region, it is unsurprising that some of the oldest remains found in Palestine speak to the African roots of the area.

Yes, UK has grown more diverse. No, it's not cause for panic

A number of remains found in Jabal Qafzeh around 100 years ago are estimated to be between 80-100,000 years old.  Recently, modern technology gave the ability to reproduce what one of those remains would have looked like had they been alive today. Jabal Qafzeh 9, bore the clear resemblance and features of a black West African woman.

Black people have been in Palestine for millennia, including the time when Palestine was considered part of Africa, and for thousands of years before that.

We also have to consider the modern context in which Jesus would have lived. As a man of colour persecuted for speaking up for the downtrodden, he’d have seen others punished for the same motive. Indeed, if Jesus were alive today, he and his people would be under siege by the Israeli Occupation Forces. Denied entry at borders.

Why? Jesus spoke up for the oppressed, refugees, the marginalised and those cast to the outskirts of society. While European Christianity has often watered-down Christ’s message to simple forgiveness, the fact is, Christ was a black revolutionary with a political, economic and health program who strived for equality and was lynched by the Roman empire as a result.

In this sense Jesus has to be considered in the radical black tradition which has always existed in all parts of the world including Palestine. That tradition has held firm, from the time of Christ to torchbearers like Fatima Bernawi, an Afro-Palestinian resistance fighter who recently died and who became the first Palestinian woman to be imprisoned by Israel after the 1967 war.

Tories are the grinch this Christmas, not striking workers

Reframing how we think about Jesus might also serve as a counter weight to the churches in the US and UK which unflinchingly support and lobby on behalf of Israel.

Churches with the iconography of black Jesus at the centrepiece are an important voice within the Christian community, where traditionally so many institutions have been completely whitened essentially acting as a conduit to further normalise white supremacy.

By the same token, Christian churches and institutions speaking out against apartheid and racism, challenging the dominant narrative are very much needed to change how we think about Christianity, which in the West at least has often been used to uphold power, rather than to hold it accountable.

With racism being challenged all over the globe, it is important that mainstream perceptions of Jesus change and evolve with the times. We must popularise an accurate portrayal of one of the most important figures in history, revered by so many millions of people all over the world. After all, he continues to have an important political, theological and social role today. Telling the ‘truth’ about Jesus is therefore not simply a matter of racial ‘preference’ in the religious imagery used.