Tories are the grinch this Christmas, not striking workers

Tories are the grinch this Christmas, not striking workers
Perspectives
6 min read

Jaice Titus writes that the Tories are to blame for the economic crisis, not workers driven to strike because of low pay and poor conditions. We must show solidarity because their fight reflects the struggle of all working people, she argues. 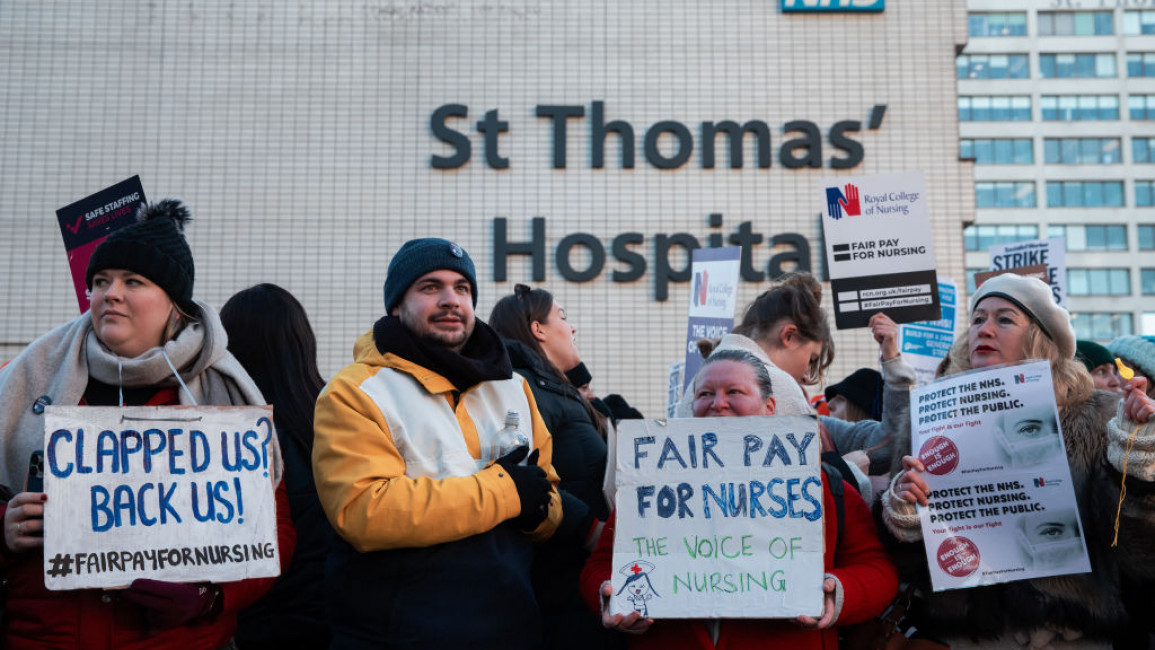 Nurses in England, Wales and Northern Ireland from the Royal College of Nursing (RCN) have taken part in the first of two 12-hour strikes over pay and working conditions, the first such mass walkout of nurses in a century. [GETTY]

On 13 December 2022, Richard Madeley, interviewing Rail Maritime and Transport (RMT) general secretary Mick Lynch on Good Morning Britain, demanded to know why Lynch was targeting Christmas – a sadistic and unkind action, he exclaimed. Madeley went on to clarify his words in an unusually transparent fashion: this was a war against ‘commercial’ Christmas. Madeley and his sort are more concerned that Christmas continues to bear its commercial fruits than they are that working people be granted a pay rise in in line with inflation.

This betrays a concern amongst elites that capital keeps the machine running during Christmas, a time when people are ideologically pushed into a commercial bonanza they can barely afford at the best of times, let alone amid a cost of living crisis.

The establishment has escalated their tirade against workers taking industrial action. In their attempt to diminish public support for the strikes, the Daily Mail showed Lynch as ‘Mick Grinch: The Man Killing Your Christmas’ while the Sun declared ‘You’ve Lost it Lynch’.

''We are living through a crisis that is economic, political, and social. It is plain to most people that nothing seems to work. Many strikers were those keeping the nation's wheels in motion throughout the Covid-19 pandemic. Our railways, education system and NHS cannot provide the services planned, and what remains of the public sector is at breaking point. Something has got to give. The strikes taking place across the country can give workers a sense of hope, and a path out of this desperate mess.''

By focusing their efforts on Lynch, the media obfuscates that the RMT union is made up of its members and 70.2% of the members voted to escalate the strikes for another six months. Most receive no strike pay and every day that they are on strike, they lose out. Going on strike is not a decision taken lightly, especially when prices for food, energy and housing are rising so rapidly. It is often the final option because all other avenues of collective bargaining and negotiations have not worked.

The employers and the government have not given rail workers a pay rise and are intent on tearing up hard won terms and conditions. RMT members have taken eight days of action over the last six months, with employers offering a derisory 4% pay rise – a real terms pay cut with the Retail Price Index of inflation running at a whopping 14%. The RMT have escalated the strikes to eight days in December.

This is an intense confrontation. What happens here is important for all working people. The way rail operators treat their workers is mirrored by how they treat consumers. Many of us pay extortionate amounts for journeys on overbooked, delayed and unsafe trains. A win for the rail workers would be a win for us all.

It isn’t just the RMT, though. This December will see more days lost to strike action than any month since July 1989. Nurses, ambulance workers, postal workers, civil servants, teachers and lecturers – there is an uprising against the low pay, cut and run approach of the Tory government this winter.

So, when GMB, The Sun and the Daily Mail foment anger against strikers, we mustn’t forget what the workers are giving up and how their families will struggle during Christmas. Striking workers are members of our families and people in our communities. As the government and the media tries to create divisions between groups of workers, we should respond by building greater and deeper solidarity.

The RMT is striking for us all!

We are living through a crisis that is economic, political, and social. It is plain to most people that nothing seems to work. Many strikers were those keeping the nation's wheels in motion throughout the Covid-19 pandemic. Our railways, education system and NHS cannot provide the services planned, and what remains of the public sector is at breaking point. Something has got to give. The strikes taking place across the country can give workers a sense of hope, and a path out of this desperate mess.

Many have compared the current crises to the strikes of 1978-9. In 1974, Labour was elected to “bring about a fundamental and irreversible shift in the balance of power and wealth in favour of working people”. They did the very opposite and by 1978 recession and inflation forced workers into striking. In what is known as the Winter of Discontent, public sector workers, journalists and bakers went on strike and started a period of struggle which even trade union leaders could not regulate.

James Callaghan’s Labour could never keep its hold after the winter of 1978 and eventually lost to Margaret Thatcher. Yet, while Thatcher was known for taking down the unions, she gave public sector workers a 25% pay rise in 1979 to prevent a second winter of discontent. Today, despite the country having had three different Prime Ministers and four Chancellors over the last six months, Rishi Sunak and Jeremy Hunt, remain completely divorced from workers concerns, refusing to offer more than 5%.

This government should be ashamed that whilst they sip on their subsidised beers, nurses need to use food banks #FairPayforNursing #DoctorsForNurses pic.twitter.com/ZhduIShZeQ

Sipping on a cocktail of arrogance and hubris, the government fails to comprehend the public mood. Despite the Tories’s stance, and the failure of Keir Starmer’s Labour Party to support the actions, there is widespread sympathy for strikes – 60% of Britons support the nurses strikes. This is a strong base upon which to build further support and solidarity for workers on strike, especially at Christmas.

During the Miners’ Strike of 1984-85, there were remarkable moments of festive solidarity among workers. Women’s Action Groups set up kitchens, distributed food parcels and organised Christmas appeals for miners’ families. Several national newspapers also encouraged pensioners to give up their pension bonus in support of the striking miners. Many did just that, making it possible for these families to celebrate Christmas together. Lorries brought Christmas toys for the children of striking miners from Germany, Belgium and France in a touching display of true Christmas kindness.

Is it possible for our networks to raise funds and show our solidarity to the 500,000 workers who are on strike this Christmas? The people who work on the rails, buses, airports, post offices, and hospitals deserve our support. A defeat for this government would be a victory for all working people. The strikers’ fight is our fight and we should find ways of raising money, visiting the pickets, speaking to colleagues at work about the strikes and spreading the gospel of solidarity.

Jaice Titus is a researcher and activist based in London.