Jeanine Hourani recounts her trip to Palestine during Christmas, when she was confronted with Israel’s erasure of Christian Palestinian history. It was also a far cry from the depoliticised nativity stories she was exposed to growing up in Australia. 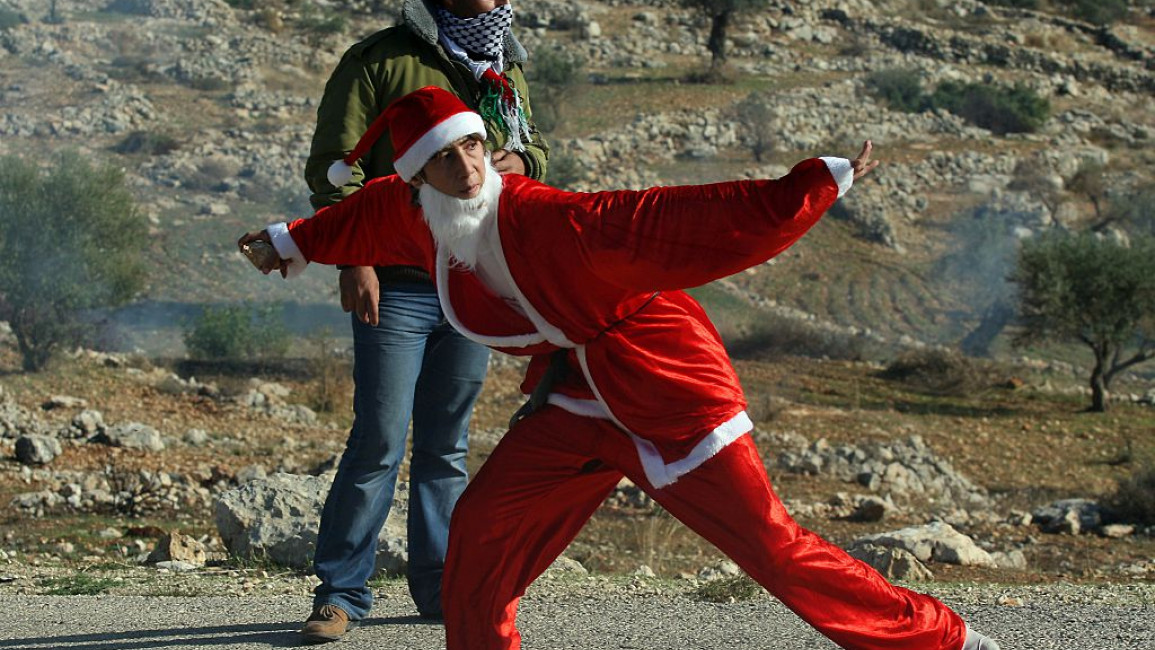 I wasn’t taught that Bethlehem is separated from two of the other religiously significant cities in Palestine – Jerusalem and Nazareth – by a concrete 9-metres-high wall and scattered with checkpoints along its perimeter, writes Jeanine Hourani. [GETTY]

In December 2018, my family and I visited Palestine – it was the first time anyone from our immediate family had been back since the Nakba. We were kept at the border for eight hours and subjected to multiple rounds of questioning.

“Which sites are you planning to visit?”

We knew immediately what question they were really asking: are you a Christian or a Muslim? For us, the question was insignificant, and we didn’t take the bait – at the end of the day, they already knew what they needed to: that we are Palestinians.

We often see the Palestinian struggle being portrayed by Western media as a ‘religious war’. I grew up knowing this wasn’t the case. The town my Teta is from, Tarshiha, was home to Christians, Muslims, and Jews before the Nakba. To this day, Tarshiha houses both a mosque and a church.

A family friend of ours often tells the story of his Father (who I called Jiddo Abu Nasser) playing marbles as a child growing up in Palestine. He explains that Ibrahim, Avraham, and Abraham would play marbles together during the week. On Friday, Ibrahim would go to the mosque; on Saturday, Avraham would go to the synagogue; and on Sunday, Abraham would go to church. On Monday, the three boys would resume their game of marbles again.

In December 2018, I saw glimpses of Palestine from the stories I grew up with – stories about Tarshiha and about Jiddo Abu Nasser. We spent Christmas Eve in Bethlehem: admiring the Christmas lights that decorated the streets; taking photos in front of the magnificent Christmas tree in Manger Square; walking through winding alleyways alongside the youth group marching band; and fondly watching in awe and envy as Mama sang along to Arabic Christmas carols that I didn’t have the luxury of learning growing up in the West.

''The Israeli regime politicises an invented notion of ‘Judeo-Christian’ values while reducing the ‘Israeli-Palestinian conflict’ into a historic, religious battle that completely erases Palestinian Christians while simultaneously reinforcing Islamophobic tropes to legitimise the state’s existence''

Bethlehem on Christmas Eve was a microcosm of Palestinian Unity, a window into a liberated Palestine where children play marbles in the street. For a fleeting moment on 24 December 2018, I forgot that Bethlehem was a city under occupation – perhaps this explains why the holiday is such a threat to the Zionist regime who, enabled by the West, have co-opted the holiday season to obscure our reality.

As a kid growing up in Australia, my kindergarten and primary school regularly staged Nativity plays and the picture of Bethlehem that we performed was completely depoliticised. I wasn’t taught that an apartheid wall snakes around Bethlehem, surrounding some homes from three of their four sides. I wasn’t taught that Bethlehem is separated from two of the other religiously significant cities in Palestine – Jerusalem and Nazareth – by a concrete wall that’s nine metres tall and scattered with checkpoints along its perimeter. I was taught that the Church of Nativity provided safety for Mary and Joseph, but not that it also provided shelter for Palestinian civilians and resistance fighters during the Second Intifada.

While I was in Palestine in October this year, I regularly came across pilgrims in Jerusalem, Bethlehem, and Nazareth. I overheard them receiving a watered-down, de-politicised version of the reality of the Holy Land, preached by Israeli state-trained and certified tour leaders. Like my primary school peers, the groups of pilgrims were completely sheltered from the reality of the Zionist regime’s atrocities and human rights abuses; I eavesdropped on their tour-guides papering over the presence of soldiers in every corner of the Old City of Jerusalem and failing to mention that the reason why Nazareth is so over-populated is because the nearby city of Saffuriya was ethnically cleansed in 1948, pushing its inhabitants into Nazareth in search of safety.

By accident, Israeli state-sanctioned propaganda leaked into my 2018 visit. As we crossed the checkpoint from Bethlehem to Jerusalem, Israeli soldiers in Santa hats were passing out Christmas chocolates. I stared at the pint-sized Father Christmas, before ripping open the foil and biting off a chunk of his head. Looking back, I’m not sure why I decided to eat it, but I think it was an unconscious attempt to take something, anything, back from the regime that took everything from me and my family. The chocolate coated my mouth but couldn’t displace the bitter taste of heartbreak and rage. It was only then that I realised there was a ribbon around Father Christmas’ neck and, attached to the noose, a note that read:

The state of Israel wishes you a Merry Christmas and a blessed holiday season.’

If Mary and Joseph set off to Bethlehem today, they'd cross 15 Israeli checkpoints and a 30ft Wall. #FreePalestine pic.twitter.com/kyATmDamCm

The note provided one of many striking examples of how the Israeli regime politicises an invented notion of ‘Judeo-Christian’ values while reducing the ‘Israeli-Palestinian conflict’ into a historic, religious battle that completely erases Palestinian Christians while simultaneously reinforcing Islamophobic tropes to legitimise the state’s existence.

In the face of such violence, it is our duty to remind the world that Jesus was a Palestinian; that we cannot visit the town he was from, the place he was born, or where he was crucified without crossing a checkpoint. It is our duty to draw inspiration from the people of Bethlehem, of Jerusalem, of Nazareth, and of Palestine who remain unified and steadfast in the struggle. It is our duty to resist on every single day of the year.

Jeanine Hourani is a Palestinian organiser, writer, and researcher currently based in London.