For Israelis, World Cup rejections in Qatar feed into their victim complex

Israeli media at the Qatar World Cup have been met with outright rejection from football fans in solidarity with Palestine. But rather than encouraging self-reflection, Israelis have resorted to a familiar narrative of victimhood, writes Emad Moussa. 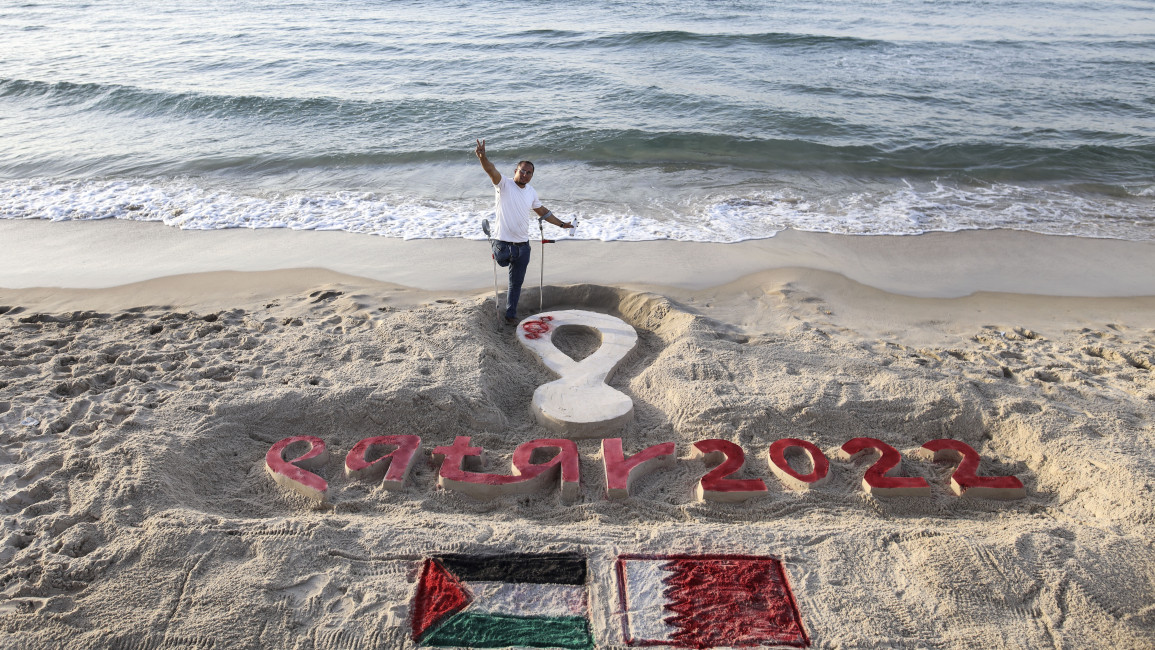 Qatar does not have official ties with Tel Aviv. But to meet the FIFA inclusion requirements to host the World Cup, Doha allowed Israelis to enter the country for the matches and issued Israeli journalists special permits. Over 3000 Israelis applied for the World Cup tickets, in addition to more who likely entered the Gulf state on secondary passports.

Average Israelis experienced very little to zero nuisance in Doha. Israeli journalists, on the other hand, did not enjoy the same low profile, coming tête-à-tête with the true Arab sentiment toward the Zionist state.

Against the backdrop of Palestinian flags and “free Palestine” slogans, they often found themselves in what can be best described as a “Palestine festival,” with Palestine effectively crowned as “the 33rd country in the tournament,” according to a Moroccan fan.

One of several journalists who has now become a recognisable face of Israel’s cold welcome in Doha, Moav Vardi, a chief international reporter for Israeli KAN, was shut down repeatedly as he tried to interview fans. “You are not welcome here, there is only Palestine, no such thing as Israel,” became the tagline thrown at Moav and other Israeli correspondents.

"Against the backdrop of Palestinian flags and 'free Palestine' slogans, [Israeli media] often found themselves in what can be best described as a 'Palestine festival,' with Palestine effectively crowned as 'the 33rd country in the tournament'"

The World Cup provided a rare opportunity for Arabs (and non-Arabs) to get together and express their solidarity with Palestine, unencumbered by the shackles and political commitments of their governments.

This is especially true for the fans from countries that have normalised relations with Israel, such as Morocco, whose fans consistently chanted for Palestine while their team members made sure the Palestinian flag was front and centre as they celebrated their historical victory against Spain and Portugal.

For the Israeli media, the message was loud and clear: normalisation agreements that had been made with Arab states were nothing more than deals with governments and do not represent the pulse of the people. But this was the limit of the Israeli assessment.

Moav Vardi told CNN that the “hatred and resentment” was not just about the Israeli occupation of Palestinian territories, but “about the very existence of Israel.” Journalists of Israeli newspaper Yedioth Ahronoth Raz Shechnik and Oz Mualem concluded that, “Qatar has taught us that hate exists first and foremost in the mind of the man on the street.”

"Beyond Qatar, the recent normalisation deals between the Arab regimes and the Israeli regime clearly do not reflect popular sentiment."
@yarahawari on how the World Cup 2022 in Qatar shows that Arab people still stand with Palestine 👇 https://t.co/fK3GC4AxzL

“They would truly like to see us wiped off the face of the earth, and any notion of Israel evokes their complete disgust,” they commented.

Both accounts are symptomatic of a typical Israeli worldview that first dismisses the political consciousness of Arabs as senseless emotionality. Second, and more importantly, it decontextualises the Arab anti-Israel sentiment as sheer “hate.”

The take-home message, in other words, was that the Arabs still hate us, evoking the late PM Yitzhak Shamir who said that “the sea is the same sea, and the Arabs are the same Arabs,” a reference to the 1960s Zionist narrative of the “Arabs wanting to throw the Jews into the sea.”

What the World Cup did not provoke was an Israeli self-reflection as to why they faced such potent rejection from Arabs. Instead, it triggered what Israelis do best: self-lamentation as ‘the region’s perpetual victims.’

The behaviour does not require context about the motives for Arab hostility; it only interprets the Arab attitude in a way that confirms Israel’s self-image as always treated unfairly and Israelis as always innocent victims.

After all, goes the logic, the Arabs have always hated us for no reason other than existing. Their animosity is merely the last episode in the continuum of suffering that has characterised Jewish history in the past two millennia.

For this particular reason, Israel’s apologists have long argued that for the Israeli state to make “concessions” it had to feel safe, and to feel safe it needed to feel accepted in the region. The extreme security measures and militarism against its neighbours should be understood and justified accordingly, as necessary actions to survive.

This is at least the theory that came with the peace treaties with Egypt and Jordan, and has been accentuated, and popularised, since 2020 with the signing of the Abraham Accords with four Arab states.

"Calling out Israel, therefore, rarely leads to self-examination or revision of policies. Instead, it confirms the notion of Israeli exceptionalism"

However, experience shows that Israel’s victim self-image and belligerence have never been entirely reactive to alleged Arab rejectionism. Instead, they are more likely a reflection of Zionism’s need for continued conflict to justify its existence and objectives. As such, it is a mindset, likely a form of neurosis - according to Henry Kissinger.

Calling out Israel, therefore, rarely leads to self-examination or revision of policies. Instead, it confirms the notion of Israeli exceptionalism and Israeli Jews as a “beleaguered minority” standing against enormous odds. Military superiority here is irrelevant.

Think of the fact that the Zionists, before and after the state, have built settlements and army barracks in the midst of Palestinian communities, on confiscated lands. Yet they were able to preserve, and even reinforce, a well-entrenched ghetto mentality by producing the conditions and feelings of being surrounded by hostile enemies.

The ‘tension’ with the indigenous Palestinian population has been viewed and responded to only in terms of Palestinian rejection of Jewish presence and denial of so-called “Jewish historical rights.” Not because those Jews have occupied and confiscated their land.

What happened in Qatar, in other words, fed into an already established pattern in the Israeli way of thinking. It sent Israelis into a too-familiar territory of self-lamentation, wondering “why do they reject us?”

It mattered not that as that happened, the Israeli army was busy killing and abusing Palestinians across the occupied West Bank, as well as bombing Gaza and Syria on the sidelines. Between the self-perception of being the victims of Arab hostility and other atrocities, the law of causality was absent from the narrative of almost all Israeli mainstream media.

Had the attitude toward Israelis in Doha been more welcoming, it would have made very little impact on Israel’s policies in Palestine. This is at least judging by the fact that Arab normalisation with Tel Aviv has only encouraged the latter’s ill practices with even more impunity.

Normalisation without justice for the Palestinians has been for years Israel’s objective, a scheme carefully crafted to legitimise the occupation and its historical narrative.

"Had the attitude toward Israelis in Doha been more welcoming, it would have made very little impact on Israel’s policies in Palestine"

Accepting Israel in the region unconditionally - without full justice for the Palestinians and the dismantlement of the Zionist racist ideology - will not bring about a change in Israel’s attitude.

It will rather empower it. Only political pressure, boycott, and resistance will, and in Qatar those manifested as overwhelming solidarity with Palestine.

It is, however, very unlikely that the Israeli World Cup experience will lead to serious soul-searching. The political blow was significant, and the likely outcome will be more aggressive policies in the territories and millions more poured into hasbara (propaganda) campaigns to save what is left of the Zionist narrative, with the help of some Arab regimes.

Moussa
https://twitter.com/emadmoussa
Recent Articles
Social Media influencers and the decline of intellectualism
24 Dec 2022
Remember Gaza's 1956 occupation in Israel's criminal record
06 Dec 2022
Is going back to the moon worth it?
17 Nov 2022
Rayan Suleiman and growing up in occupied Palestine
12 Nov 2022
View More
More in Opinion