Despite regional normalisation with Israel, the immense support shown for Palestine by football fans at the tournament reaffirms the unwavering solidarity among the Arab people, writes Yara Hawari. 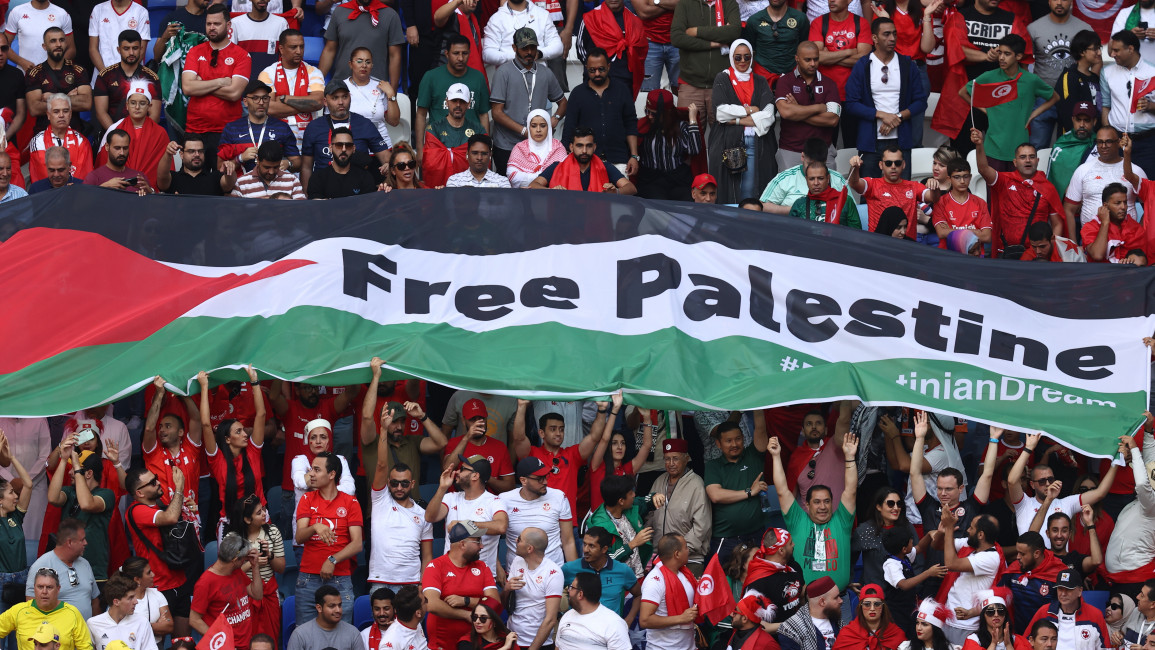 Tunisian fans hold a Palestine flag with Free Palestine written on it during the FIFA World Cup Qatar 2022 match between Tunisia and Australia 26 on November 2022. [Getty]

The 2022 World Cup in Qatar is well underway following years of controversy surrounding accusations of corruption and vote buying. Since it began, the host country has also faced intense scrutiny from human rights groups around its treatment of migrant workers and LGBTQ+ people.

In addition to this, the World Cup has also brought to the forefront the subject of Arab normalisation with the Israeli regime. Whilst the Israeli regime’s football team failed to qualify, the Israeli Foreign Ministry expects at least 20,000 Israeli’s to make the trip to Qatar during the month of the tournament.

This comes after an announcement only a few days before the commencement of the World Cup that an agreement had been reached allowing for temporary direct flights between Tel Aviv and Doha.

FIFA President Gianni Infantino announced that, “With this deal, Israelis and Palestinians will be able to fly together and enjoy football together”. A Qatari official claimed that this would also apply to Palestinians living in the West Bank and Gaza.

"Beyond Qatar, the recent normalisation deals between the Arab regimes and the Israeli regime clearly do not reflect popular sentiment"

However, what this deal didn’t mention is that Palestinians from the West Bank and Gaza are forbidden from flying out of Tel Aviv airport. In exceptional circumstances they can apply for special permits, which takes up to months to process and are usually only granted a few hours before take off.

These exceptional cases are few and far between, with only a few hundred being granted permission every year. Palestinians in the West Bank and Gaza are not permitted to have airports, and so in order to travel they have to get Israeli exit permits before crossing to a neighbouring country in order to fly.

Qatar is one of the Gulf states that has not officially normalised relations with Israel, but this flight deal was not as surprising as it may seem. In 1996, Qatar became the first Gulf state to de facto recognise the Israeli regime by establishing trade relations.

The relationship deteriorated, however, following the Israeli regime’s assault on Gaza in 2008, and Qatar subsequently ceased all formal ties. However, informal relations have continued, as has a modest amount of trade.

But what is clear is that there remains popular grassroots Qatari opposition to normalisation with the Israeli regime. Indeed, with the announcement of flights between Tel Aviv and Doha, Qatar Youth Against Normalization (Qayon) published a statement condemning the agreement and encouraged residents of Qatar to display Palestinian flags widely.

Beyond Qatar, the recent normalisation deals between the Arab regimes and the Israeli regime clearly do not reflect popular sentiment.  Before the ratification of the Abraham Accords, dozens of grassroots and civil society groups in Bahrain published a collective statement rejecting the move and reiterating support for the Palestinian struggle for liberation. Among them were various leftist groups, unions, and professional associations.

The Gulf Coalition Against Normalization was also established in 2019, bringing together activists from Gulf countries who are committed to Palestinian liberation. A survey conducted between 2019-2020 by the Arab Centre for Research and Policy reveals that, across the region, Arab peoples continue to be in opposition to diplomatic normalisation with Israel.

"Since the beginning of the Zionist settler colonial project in Palestine, people across the region have consistently and unwaveringly opposed it and supported the Palestinian struggle"

In Kuwait, Qatar, and Morocco, opposition to normalisation stands at 88%, while in Saudi Arabia, only 6% are in favour of it. In fact, lawmakers and civil society organisations in Algeria, Tunisia, and Kuwait have been pushing to criminalise any form of normalisation with the Israeli regime, and Iraq passed such a law in May 2022.

Since the beginning of the Zionist settler colonial project in Palestine, people across the region have consistently and unwaveringly opposed it and supported the Palestinian struggle.

Whether in the streets or Doha or Algiers, it is clear that opposition to normalisation with the Israeli regime amongst ordinary Arab people remains strong to this day, regardless of official policy of their countries.

The question remains: how much longer can the Arab regimes defy this popular support?

Hawari
https://twitter.com/yarahawari@
Recent Articles
Ben Gvir and a new reign of cruelty for Palestinians
20 Dec 2022
Europe's lack of empathy for refugees is shocking
28 Sep 2022
A music studio and the destruction of Palestinian Jerusalem
15 Aug 2022
Targeting BDS is about repressing all political dissent
20 Jun 2022
View More
More in Opinion

Bloody Sunday 51 years on: There is no British justice