'The Arab World has not forgotten Palestine': Palestinians, Israelis react to Qatar 2022 World Cup coverage
MENA
5 min read
Ibrahim Husseini
Jerusalem
"Some Israelis seemed to think that the Abraham Accords has granted them full access to the Arab World but it didn't. The Arab world has not forgotten about Palestine," said anti-Israeli occupation activist Angela Godfrey-Goldstein. 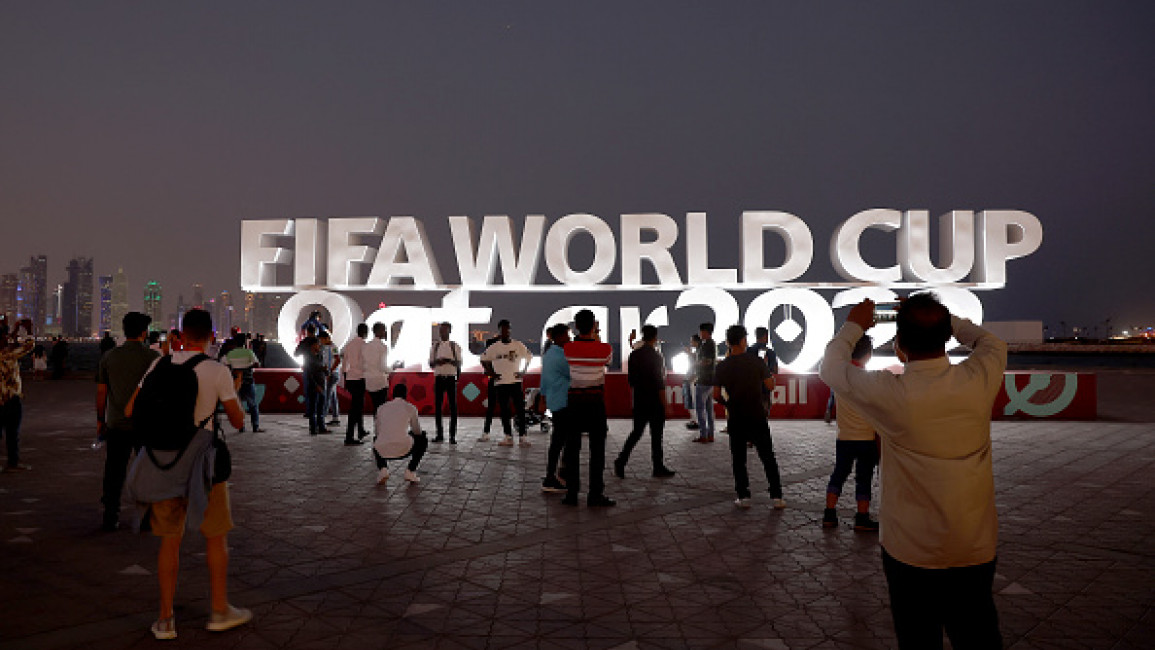 The 2022 World Cup in Qatar is more than a super football event. In addition to the talk about the beautiful game, issues of world importance are raised and discussed—the perception of the Middle East in the eyes of different nationalities, media coverage, politics, Palestine and human rights.

On these points, Qatar, the host of the World Cup, is gaining praise and criticism from the ground in Palestine.

Earlier in 2022, the Olympic Games were held in China, and Russia, in 2018, hosted the World Cup. However, according to observers, the two countries' human rights records were not raised as much as Qatar's.

On Sunday, at the start of the World Cup tournament, the first direct flight from Tel Aviv to Doha took off. Qatar has no diplomatic ties with Israel but agreed to the arrangement following FIFA's intervention.

As the host, Qatar must open its borders to all nationalities wishing to attend the event.

Israel has also set up a consular mission in Doha that will operate for the tournament duration. An estimated 10,000 Israelis are expected in Qatar for the games. In the 1990s, an Israeli trade mission opened in Doha but was shut down in the wake of Israel's war against the Gaza Strip in 2008-2009.

The New Arab spoke with Palestinians and Israelis to gauge opinions of having Palestine be spotlighted during the tournament's opening days.

Lamis Amireh, a young Palestinian woman cheering the Brazilian team, said she was surprised by the amount of support shown at the World Cup to the Palestinian cause.

"It was strange. I didn't know there was this much awareness and support for the Palestinian cause; I am happy the Mondial is a platform for this," she said.

Amireh snubbed criticism of Qatar's human rights record, saying it's "not the place of Westerners to criticise..their past and present is riddled with racism."

Angela Godfrey-Goldstein, a British-Israeli living in West Jerusalem and a campaigner against the Israeli occupation, is a moderate football fan. However, she thinks the World Cup is a platform for starting conversations.

"It's wonderful that it's in Qatar," she said.

"It allows for things to be discussed. Palestine is on the radar. Human rights in Qatar and the LBGTQ," she added.

Raed Sa'adeh, an owner of the well-known "Jerusalem Hotel" in East Jerusalem, says Qatar's hosting of the World Cup is encouraging and a chance for many visitors to experience an Arab-Muslim country.

The fact that the World Cup is held in Qatar adds one more positive aspect, according to Sa'adeh.

"It's an Arab country, Arab culture," he said.

Palestinians and Israelis followed with interest the responses from World Cup fans to Israeli reporters covering the games in Doha.

David Wyman, an Israeli, welcomed Qatar's opening its skies to Israeli travellers but told TNA that "[Israelis] should not go out of respect for the many workers that died building the stadiums."

Wyman also acknowledged that the World Cup had become a stage for political activism.

"The protest of the Iranian team was wondrous - I am full admiration," he added.

By and large, Israeli reporters were given the cold shoulder by World fans, but no reports of maltreatment by the authorities or FIFA officials.

A video of an Israeli journalist being shunned by a young Lebanese man in Doha has made the rounds on social media venues.

Ohad Hemo from Israel's Channel 2 approached a group of men, exchanged pleasantries, and then revealed his Israeli nationality. It didn't go agreeably.

"Hi, how are you? Are you from Lebanon?... "I am from Israel," Ohad spoke in Arabic to the young Lebanese fan.

The Lebanese walked away.

I am at a loss to explain why Israel doesn’t enjoy universal adulation in the Arab world.

What significance does the trifle of the longest belligerent occupation in the world have among friends? https://t.co/on5V0hu9qp

Israel's public broadcaster Kan didn't fare better. The Israeli correspondent attempted to do a vox pop-style TV piece at Doha's Souq Waqif, a marketplace for traditional garments and spices. But as soon as the shopkeeper heard where the crew came from, he changed his mind.

"We are the public broadcaster from Israel," said the TV reporter.

"Actually, I don't want to talk with you," the shopkeeper said.

In other instances, fans stood behind Israeli TV reporters and held the Palestinian flag.

"It's a normal reaction because Israelis have offended Qatar," said Ahmad Bukhari, a Palestinian sports commentator and a football enthusiast from East Jerusalem, said to TNA. Bukhari plans to fly to Qatar via Amman, Jordan, to watch the quarter-finals. He is also a fan of the Brazilian team.

Ahead of the first World Cup football match, a caricature depicting the Qatari and Equadorian teams suggesting match-fixing appeared on an Israeli media outlet.

Anti-occupation activist Angela Godfrey-Goldstein was not surprised by Arab fans snubbing of Israeli reporters in Doha.

"Some Israelis seemed to think the Abraham Accords granted them full access to the Arab World, but it didn't. The Arab world has not forgotten about Palestine," she added.

Seems this #WorldcupQatar2022 is being used by western nations as an occasion to care about #HumanRights. Amazing news! You’re all welcome to hold Israel accountable for violating every single UN resolution concerning #Palestine.