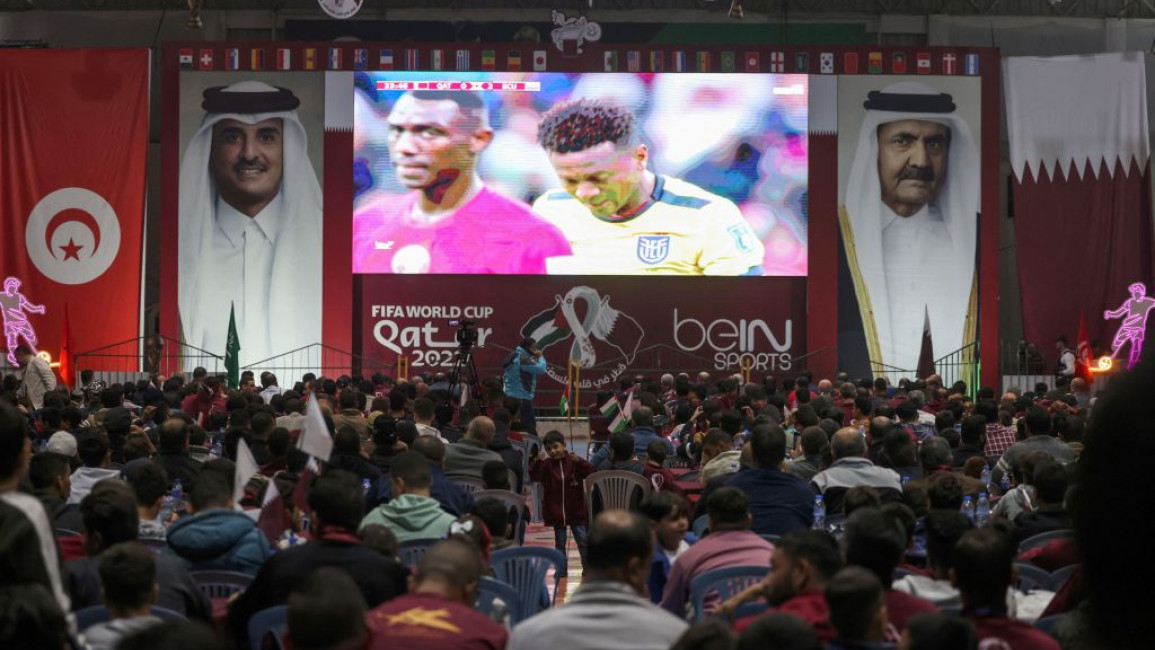 In public places within the besieged coastal enclave of the Gaza Strip, thousands of Palestinians gathered together to celebrate the launch of FIFA World Cup Qatar 2022 and watched the first match between Qatar and Ecuador.

Inside the Saad Saiel hall in Gaza city, the fans of football, including women, keenly followed the first match aired on big screens, enjoying the festive atmosphere of the World Cup's opening and many praised the Qatari efforts in hosting "such an international event."

Raising the Palestinian and Qatari flags, the fans chanted slogans in support of the Qatari team, with many expressing their happiness of having a chance to watch the matches for free.

On Sunday, Gaza-based the Supreme Council for Youth and Sports launched the activities of the World Cup that was funded by the Qatari Committee for the Reconstruction of the Gaza Strip.

Speaking separately to The New Arab, Palestinian residents of the area said that "hosting the world cup in Qatar is a great achievement for the Arabs in general not only for Qatar."

"For more than 15 years, the Israeli occupation has tried to isolate us from the world by imposing its illegal blockade on us. However, we feel now that Qatar broke the siege and allow us to take a place in its celebration, even though through the screens," Naima al-Naji, a young woman in Gaza, told TNA.

Drawing the Qatari flag on her face, the 25-year-old woman said that "I am so happy to attend the matches with the population in a public place." Quickly adding, "I support Arab teams in the competition and I hope one of them gets the cup this year."

"No one here (in Gaza) can express his emotion of this special occasion mainly as this is the first time for us to really knew that we are in the hearts of our Arab peoples," said Mohammed al-Masri, a man from Jabalia.

"I cried when I saw our Palestinian flags were raised over the stadiums, while we used to be banned by the European countries who do not allow any person to be in solidarity with us," the 51-year-old father of six added.

Fans show Palestinian solidarity in Qatar ahead of World Cup

Moreover, he further added, that he thought Qatar kept its Islamic and Arabic identity and "did not allow any Western countries to blackmail it," noting that "what made me happy, was Qatar refused to allow the Israelis to celebrate on its land."

Al-Masri is referencing how ahead of the World Cup some politicians and human rights defenders mainly in North American and European countries called for a boycott of the sporting event in Qatar, under the pretext that it violates the human rights of people, particularly the workers and the people from the LGBTQ community.

"Such calls and accusation aim at failing the Qatari efforts to host the sporting even, only because it is Arab and Islamic country," Hadi Bashir, a  Khan Younis-based football fan, argued to TNA.

"It is better for America and European countries not to talk about their human rights violations in their countries," he said. "The Palestinian people are the most exposed to daily violations because of the Israeli occupation and the international silence about its crimes."

"Those who legitimise the existence of Israel on our land and justify the continuous Israeli killings and crimes against our people and against our land and sanctities, especially our holy city of Jerusalem, have no right to talk about human rights," he added.

Al-Naji, al-Masri, and Bashir further pointed out that Qatar "is the only country supporting Gaza", mainly during and after the Israeli wars, through reconstructing hundreds of the destructed houses and building new houses for the people.