In the run-up to the FIFA 2022 World Cup, Marc Owen Jones analyses media coverage of Qatar, and unpacks the reasons behind the skewed critical representations of the host nation in the British press. 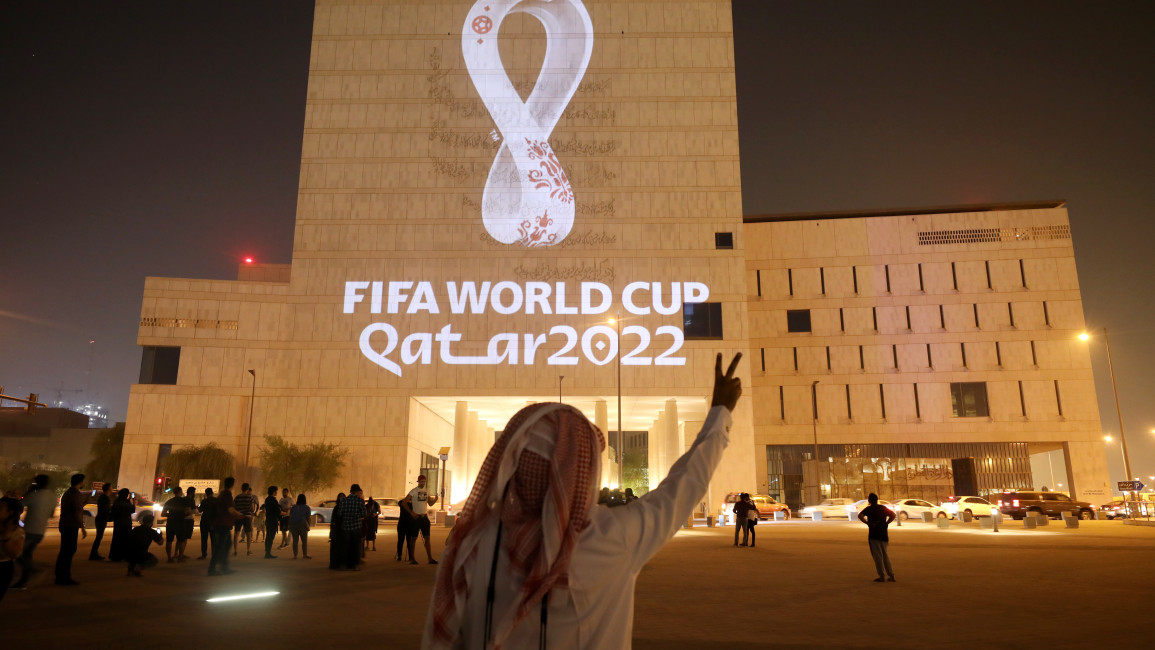 The Official Emblem of the FIFA World Cup Qatar 2022™️ is unveiled in Doha's Souq Waqif on the Msheireb - Qatar National Archive Museum building on 3 September 2019 in Doha, Qatar. [Getty]

On 21 July 2022, British newspaper The Guardian published an article with the headline, ‘Outrage in Qatar over shooting of 29 dogs as it prepares for World Cup’. In an act of editorial bait and switch, the headline connected two events that share nothing in common. Moreover, it was unclear whether the killing of the 29 dogs was the outrageous event or if the disgrace was because it happened in a country that was hosting the FIFA 2022 World Cup.

Either way, it is hard to imagine that a similar incident in the Global North would be attached in this way to an upcoming sports tournament. By way of comparison, in 2002, when the UK hosted the Commonwealth Games, it had just culled 6 million cattle due to foot and mouth disease. But of course, these two events never shared a headline.

The conflation of the two unrelated events smacked of reductionism: what happens in Qatar isn’t important unless it can be related to the World Cup. The Guardian headline, like many headlines encountered over the past ten years, reflect a problematic tendency in coverage of the Qatar World Cup to frame everything that happens in the Gulf state through the prism of the global sports event.

"This article is not about whether human rights are important and worthy of coverage (of course they are); it’s about establishing whether the press, in this case the British press, is actually treating Qatar differently, and if so why"

This has not gone unnoticed. Scholars have started to pick up on these skewed media representations and singling out of the Qatar World Cup as an 'exceptional' phenomenon. Natalie Koch mentions a prevailing sense of “moral superiority” among Western observers around the World Cup. Crystal Ennis asks why Qatar is being singled out when migrant abuse is pervasive everywhere: “Exceptionalising Qatar allows observers to dismiss abuse as something inherent in Middle Eastern societies or cultures.”

Neha Vora and Zahra Babar argue that, ‘‘civilisation discourses about the oppressive, repressive and corrupt Gulf have marked the coverage of the World Cup in Qatar and human rights campaigns, in particular, have reproduced a white colonial gaze in representing labour and immigration in the Gulf.”

Of course, the issues dominating the news about Qatar, such as workers’ rights or LGBTQ+ rights, are inherently newsworthy. But this article is not about whether human rights are important and worthy of coverage (of course they are); it’s about establishing whether the press, in this case the British press, is actually treating Qatar differently, and if so why.

An exploration of media narratives and coverage of the Qatar World Cup gives credence to the perception that Qatar is being 'exceptionalised', particularly when compared to other World Cups.

Since winning the World Cup bid in 2010, the UK newspapers The Guardian, The Times, Daily Express, The Sun, Daily Mail, The Telegraph, and Metro UK named Qatar approximately 1,735 times in their headlines. 40% (685) of those articles about Qatar are about the World Cup.

Analysis of all 1735 headlines containing the word ‘Qatar’ reveals that the most commonly occurring word or phrase among all headlines was ‘World Cup’. In other words, ‘World Cup’ was the most commonly occurring term in all headline reporting on Qatar. These figures would suggest that Qatar’s relevance in the UK press is significantly defined by its hosting of the World Cup. This 'surfacing' then suggests World Cup stories play a large role in mediating the portrayal of Qatar in the British press.

A topic analysis reveals that the top 5 most common topics in all articles about Qatar are: 1) worker rights and human rights 2) sports 3) the 2017 Gulf Crisis 4) corruption and bribery 5) aviation.

Thread 1/ Many have talked about the media portrayal of Qatar 2022 but as far as I am aware there are no content analyses. This is a content analysis of 1,735 British newspaper headlines mentioning Qatar since 2010. I analysed 9 different mainstream outlets. #Qatar2022 pic.twitter.com/loOSx5k62j

Except for the key terms ‘Qatar’, ‘FIFA’, and ‘World Cup’, the most common term in any headline article about Qatar was ‘workers’, referring exclusively to the conditions faced by mostly construction workers building infrastructure in Qatar.

The timeline of articles reveals some interesting things. In 2017, reporting on Qatar was dominated by the Gulf Crisis. This had the effect of displacing and reducing the overall percentage of articles about the World Cup to only 9% of all coverage.

Of those negative articles, more than a third (36%) were critical of human rights, with a focus on workers’ rights, while around 25% were about corruption and bribery. About 9% of headlines were about stripping Qatar of the World Cup. About 4% were about LGBTQ+ rights, and these were more likely to be shared on Twitter, even if fewer in number.

For comparison, it is useful to look at coverage of Russia’s World Cup. Only about 3% (492 of 15000) of all articles in the period between Russia being awarded the World Cup and its hosting were actually about the sporting event, while with Qatar it is 40%.

"Western media tend to report ‘negatively’ on countries that are smaller, less visible, and generally less powerful. Coverage of mega sporting events in Global South countries tend to be negative and often Orientalist"

The coverage of Russia in general was extremely negative, with no shortage of acts of brutality as content. Indeed, the shooting down of MH17, the illegal annexation and invasion of Crimea, the bombing of Syria, numerous LGBTQ+ rights issues, and the poisoning of UK residents with nerve agents all occurred before the World Cup and were covered heavily.

Given Russia’s actions prior to its World Cup, it is clear that negative coverage regarding the World Cup does not correlate to a state’s capacity for brutality or harm (these are demonstrable in all cases). So why is it the case that a connection is made between Qatar’s state actions and the World Cup?

The explanations are multifaceted. Media coverage relates to news values, the things journalists consider when selecting stories. In the UK, football is relevant news, and the World Cup, as a mega sporting event (MSE), is even more newsworthy. Human rights issues are also relevant and newsworthy to some (not all) papers in the UK, and the British press is generally critical - as it should be.

MENA
The New Arab (From the Arabic Edition)

However, these reasons do not explain why World Cup-related headlines for Russia were less likely to be connected to its acts of brutality. Soft power is part of the reason. Russia’s state broadcaster was found in one study to have helped generate a more positive image of Russia. Qatar has also spent four more years in the spotlight than Russia, which was awarded the World Cup at the same time but hosted it in 2018.

There are also other issues known to impact coverage. Western media tend to report ‘negatively’ on countries that are smaller, less visible, and generally less powerful. Coverage of MSEs in Global South countries tend to be negative and often Orientalist.

Soft-power endeavours like the World Cup also need a supportive regional environment, which did not exist in Qatar between 2017 and 2021 – the years of the blockade of Qatar by its neighbours. While Gulf Crisis coverage displaced World Cup coverage, it also reflected a hostile regional environment in which British and other firms (Project Associates, CTF Partners, Cornerstone Global) reportedly pitched projects to clients to generate negative media coverage of Qatar in traditional and social media.

"Coverage of the World Cup has constructed Qatar as a caricature – that is, an un-nuanced place in which certain characteristics are exaggerated in order to create a comic or grotesque effect"

Writing on why the UK should not boycott the Russia World Cup, sports journalist Barney Ronay wrote, “No nation has a monopoly on acts of brutality, which history suggests are pretty evenly shared around.”

Despite the naivety of a statement which suggests moral equivalence between states regardless of their size or history, when it comes to the World Cup, the British press do not evenly share such acts of brutality around. While British media posted numerous negative articles about both World Cups, coverage has tended to separate Russia’s acts of brutality from the World Cup far more than it has Qatar’s.

Coverage of the World Cup has constructed Qatar as a caricature – that is, an un-nuanced place in which certain characteristics are exaggerated in order to create a comic or grotesque effect. Indeed, if The Guardian is to be believed, Qatar is known for two things: “huge oil reserves and flagrant human rights abuses”.

Perhaps with more comprehensive or nuanced reporting, this could be one day stretched to three – excluding the World Cup of course.

Marc Owen Jones is an Associate Professor of Middle East Studies at HBKU and a Senior Non-Resident Fellow at Democracy for the Arab World Now and the Middle East Council for Global Affairs.