From Unity Intifada to World Cup, the Palestinian cause is growing stronger

From Unity Intifada to World Cup, the Palestinian cause is growing stronger
Voices
5 min read

Despite Israel's lavish PR campaigns and FIFA's insistence that football is 'apolitical', the outpouring of support for Palestine during the World Cup from Arab and global fans reaffirms the strength of the cause, writes Jeanine Hourani. 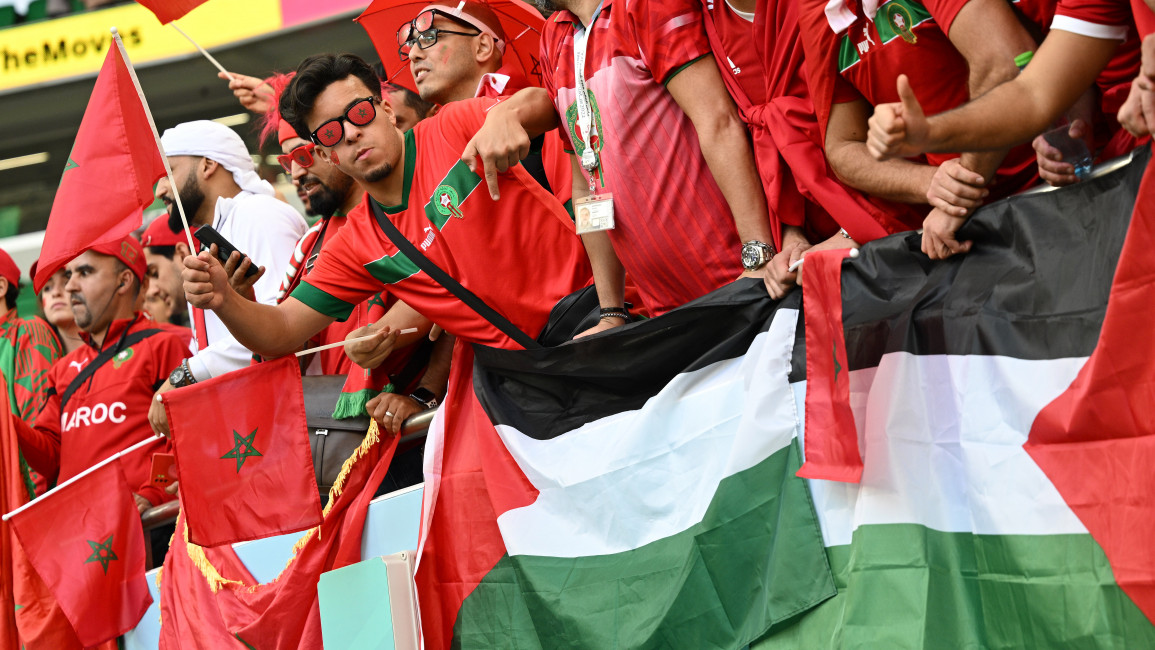 As a kid, I hated the World Cup. Every four years, I was filled with an impending sense of dread as FIFA season approached. Born in Bahrain to a Palestinian father and Lebanese mother, raised in the United Arab Emirates with an Australian passport and attending a British school, the World Cup always ushered in a sense of nationalism that left me confused and uncomfortable.

This year is the first time I am genuinely looking forward to watching football matches, and it’s because of the unity and solidarity that has been on display.

For decades, Palestinians have been calling on FIFA to sanction Israel from taking part in their competitions due to its grave violations of human rights and international law.

In October 2017, FIFA made the decision to allow clubs that play in illegal Israeli settlements to continue to compete, “refraining from imposing any sanctions” despite Israel’s ongoing and violent attacks on Palestinian athletes and sports facilities.

"For too long, international bodies like FIFA have claimed to take an ‘apolitical’ stance under the guise of impartiality and objectivity while simultaneously emboldening the Zionist regime to continue to act with impunity"

For too long, international bodies like FIFA have claimed to take an ‘apolitical’ stance under the guise of impartiality and objectivity while simultaneously emboldening the Zionist regime to continue to act with impunity. However, this World Cup has shown that sport is political and that politics are determined by the people, not by neoliberal, capitalist institutions that continue to prioritise profit over principles.

The Israeli government has spent exorbitant amounts of money trying to improve the country’s public image. ‘Brand Israel’, a public relations campaign launched in 2005 has received millions in funding including $26 million from the Foreign Ministry in 2010.

Despite the Israeli regime’s attempts to market itself as a cosmopolitan, progressive, Western democracy, the Unity Intifada of May 2021 showed just how easy it is to expose the truth. Over the course of mere months, we saw terms such as settler colonialism, ethnic cleansing, apartheid, and occupation become part of every day vernacular on Palestine.

In response to the uprisings sparked by the ethnic cleansing of Sheikh Jarrah, we saw popular knowledge on Palestine being transformed, from understanding the Nakba as a historical event that is still ongoing to recognising the strength of our resistance.

Despite Palestine not qualifying for #WorldCup2022, its national flag has been spotted both inside and outside the stadium across Qatar. @saoudkhalaf_ delves into the nature of this support 👇 https://t.co/pq0DQuiQpX

Building off this, numerous reports from leading human rights organisations and United Nations bodies have unequivocally affirmed that the Israeli regime is perpetrating apartheid, occupation, and ethnic cleansing to maintain its settler colonial project over the indigenous Palestinian people.

The Unity Intifada showed us how popular opinion is really made – not through multi-million dollar government campaigns, but by mobilising and organising on the streets. Today, we are witnessing the streets of Doha birth an organic campaign that has built on this shift of popular understanding and support for the Palestinian cause via the Qatar World Cup.

Over the last couple of weeks, we have seen football fans raise Palestinian flags, singing and chanting in support of Palestine, and turning away Israeli journalists. In doing so, they have made it overwhelmingly clear that Zionism is not welcome in the Arab world.

Both the Unity Intifada and popular support for Palestine at the World Cup have shown that no matter how many millions the Israeli regime invests in whitewashing its atrocities, the truth is free and it will always prevail.

In 2020, several Arab nations sign US-facilitated normalisation deals with Israel. Morocco signed an agreement with the Israeli regime in December 2020 but, despite this, we have seen immense displays of solidarity of the Moroccan teams and fans with the Palestinian people.

We have seen viral videos of a popular pro-Palestinian anthem, normally sung by local Moroccan football team Al-Raja Al-Riadi, which includes lyrics such as, “Oh the most beautiful of countries, resist, may God protect you from the oppression of your enemies”.

Across numerous games, we have seen stadiums erupt with Arabic chants of “With our soul, with our blood, we defend you, oh Palestine”. Most recently, Moroccan player Jawad El Yamiq proudly draped the Palestinian flag over his shoulders after Morocco’s recent victory over Canada.

At the World Cup, the Palestinian flag has become a symbol of Arab unity. These displays of solidarity have undoubtedly shown that Arab governments that formally and informally normalise relations with the Israeli regime do not represent the Arab people, and that Arabs continue to stand firmly with Palestine and Palestinians.

"Today, we are witnessing the streets of Doha birth an organic campaign that has built on this shift of popular understanding and support for the Palestinian cause via the Qatar World Cup"

Such displays of solidarity are reminiscent of the glory days of pan-Arab Unity under the leadership of Gamal Abdel Nasser and remind us that the Palestinian cause is a cause for all Arabs.

In particular, I’m reminded of the words of the late Samah Idriss, a Lebanese intellectual and freedom fighter who dedicated his life to fighting for Arab Unity and the rejection of normalisation. Less than a month before his passing, his final speech was delivered in Beirut where he ended with the words: “If we abandon Palestine, we abandon ourselves.”

At the same time, solidarity with Palestine and with the Palestinian people at this year’s FIFA World Cup has not been limited to Arabs. We have seen a number of videos of English football fans exclaiming “Free Palestine”. A video has also been circulated of an Australian football fan waving the Aboriginal flag, stating “they are the Palestinians of Australia”.

Jeanine Hourani is a Palestinian organiser, writer, and researcher currently based in London.