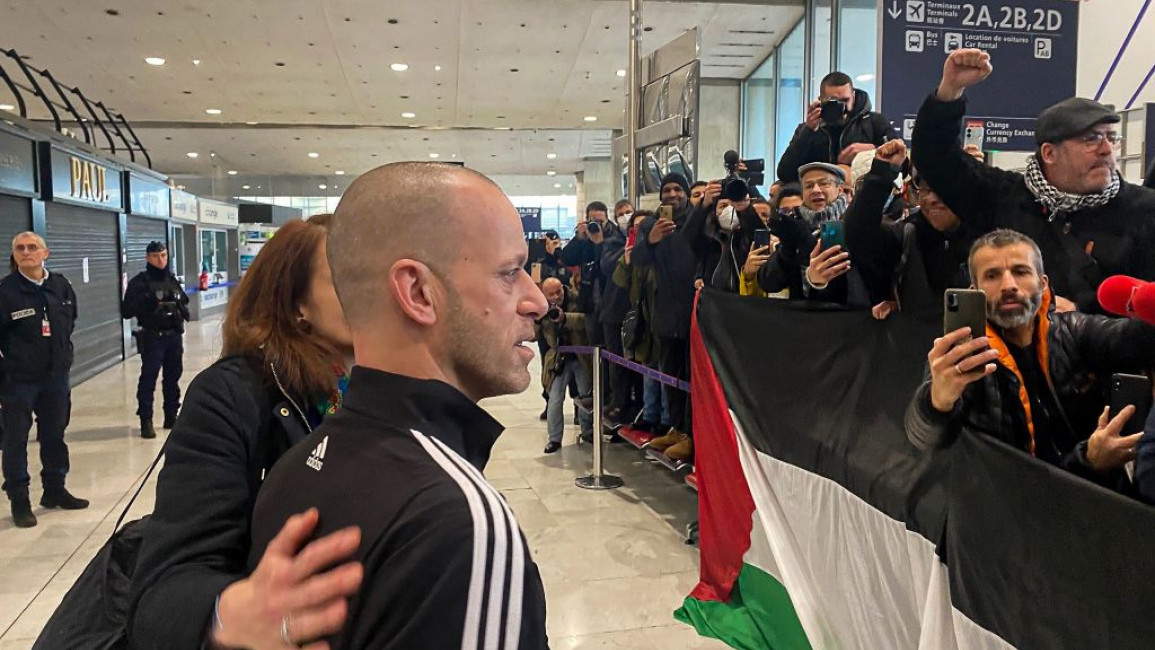 French-Palestinian lawyer Salah Hammouri arrives at the Parisian airport of Roissy, after he was deported by Israel on 18 December, 2022.

The occupier finally did it. Lawyer and human rights defender Salah Hammouri has been deported from his hometown to Paris on Sunday 18 December on an El Al flight. This follows two decades of harassment by Israel against the Jerusalem native, who had also spent nine months of administrative detention without trial or due process before his expulsion.

This unilateral decision comes as Israel is ethnically cleansing Jerusalem to wipe out any Palestinian presence. It remains to be clarified why France accepted Hammouri on its soil given he had no passport. It also seems impossible that the French government had no knowledge of his forcible deportation, let alone which specific flight he would be put on.

''Israel’s criminal policies continue to lay bare its true intention: the ethnic cleansing of Palestinians. This decision of Israel to forcibly remove Salah Hammouri from his hometown is as legitimate as Israel’s right to exist as an apartheid state.''

Moreover, deported passengers are under the responsibility of the carrier and by extension the state of registry of the aircraft until they are accepted by the ‘host’ country.

France should have refused to let Hammouri arrive on French land in order to leave Israel with no choice but to return with him or, failing to do so, engage in a diplomatic row while parking and handling fees at Roissy airport pile up.

Refusing passengers is not far-fetched. Emmanuel Macron had previously expressed his anger towards Algeria and Tunisia for refusing to accept their citizens after they were deported from France and because he could not force them back.

In the face of the recent deportation, the French Ministry of Foreign Affairs published what is frankly a pathetic press release, “condemning the expulsion of Salah Hammouri”. As if the countless condemnations of Israeli crimes against humanity and war crimes have had any effect on its policies so far.

In reality, the French government has done the bare minimum to voice its opposition, and their official condemnation seems to show that they want the case closed quickly, and to avoid any confrontation with the Israeli government.

As stated by the UN, the deportation of Salah Hammouri constitutes a war crime. Forcibly removing people from their homeland is clearly defined as such by articles 49 of the Geneva convention and article 8 of the International Criminal Court (ICC) statute. But, how many times has Israel been accused of committing such crimes to no avail?

Indeed, the Hammouri case is a dire indictment of France’s cowardly and hypocritical policies both at home and abroad. Despite the election of the most far-right government to date, Emmanuel Macron was quick to call Benjamin Netanyahu to congratulate him and remind him of France’s strong ties with Israel. At home, political support to Palestinians is criminalised as demonstrations are regularly met with police violence and the boycotting of Israel is still prohibited.

Despite the shocking deportation, there are still no signs of any changes to France’s position. Back in February 2022, in reference to Israel’s plans to annex the whole of Jerusalem, Macron’s PM Jean Castex, declared that "is the eternal capital of the Jewish people, I have never stopped saying that, “ and that he is “concerned about the United Nations resolution on Jerusalem which continues to purposely and against all evidence discard the Jewish terminology of 'Temple Mount'".

Under Macron’s leadership, France’s submissive foreign policy towards Israel is clear for all to see, but in truth this is just the latest iteration of his predecessors’ approach. The guilt complex France has because of its antisemitic policies under Vichy and its deportation of Jews and collaboration with the Nazi regime, continues to be used as a justification for the lack of condemnation when it comes to Israel’s crimes against the Palestinians.

The expulsion of Hammouri further exposes France’s real global power. The grandiose discourses by respective French governments on “human rights” and their support for a two state solution – the decade long mirage used to indefinitely delay the very idea of Palestinian self-determination – portray France as a midget on the international scene. Not to mention, it means the country is complicit in the crimes being committed against Palestinians.

Israel’s criminal policies continue to lay bare its true intention: the ethnic cleansing of Palestinians. This decision of Israel to forcibly remove Salah Hammouri from his hometown is as legitimate as Israel’s right to exist as an apartheid state.

In response to this latest tragedy, and all the rest committed by Israel, the Palestine solidarity movement must commit to a more robust and radical approach. Reminding a rogue state of international law and morality is as effective as reminding a thug about the importance of the rule of law. International law means nothing to Israel. After all, a state established by European settlers for the most part could not have become, nor was it ever conceived as a project founded on the rule of law and equality between its citizens.

In the powerful words of Salah Hammouri, who reminds us, though visibly scarred and aware he might never see his homeland again, that “this machine of destruction called Israel only retreats in the face of Palestinian resistance”. We must continue to mobilise, “until liberation, independence, and especially, the return.”