The longstanding solidarity between the Irish and Palestinian people is linked to Britain’s imperialist role in both territories, explains Farrah Koutteineh, who reflects on the many similarities between their experiences of violence and resistance. 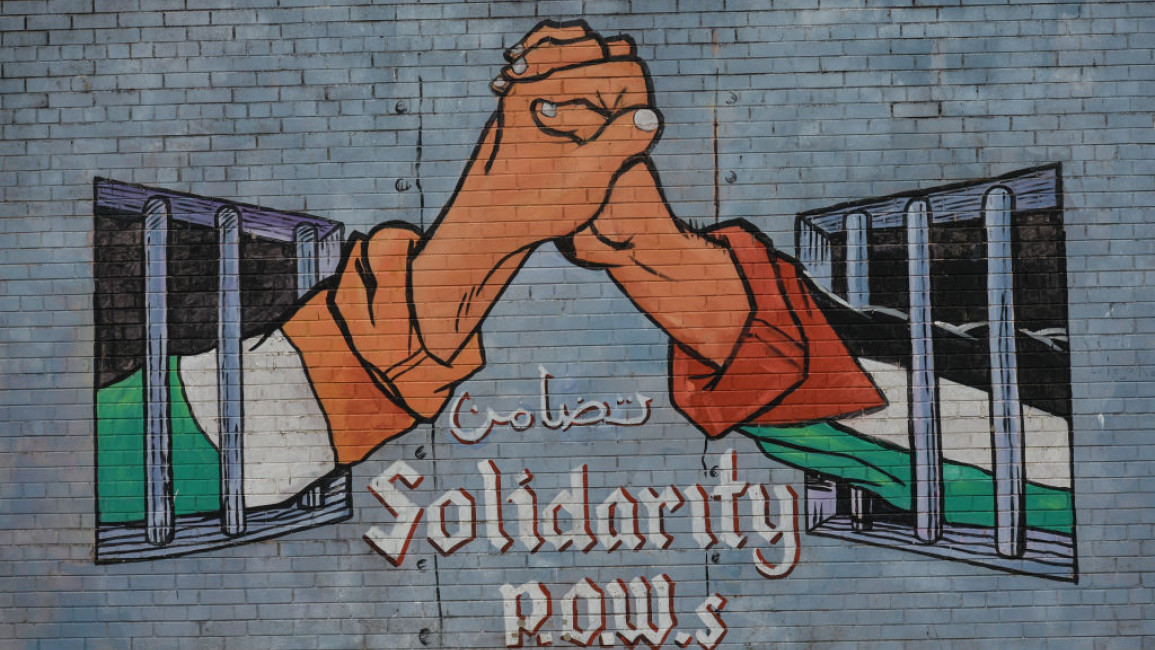 Across Ireland, from Derry to Dublin, from Cork to Belfast, you will see solidarity murals on Palestine, writes Farrah Koutteineh. Artwork in Belfast, Northern Ireland [Artur Widak/NurPhoto via Getty Images].

For decades the people of Ireland across both North and South have wholeheartedly stood side by side with the people of Palestine in their struggle for freedom, decolonisation and justice. A struggle that the Irish people know all too well.

Across Ireland, from Derry to Dublin, from Cork to Belfast, you will see solidarity murals on Palestine, people roaming the streets wearing Palestinian keffiyeh’s, Palestine flags proudly flying high from ordinary people’s homes, to Palestine flags being flown from the roofs of city halls. This visible Irish solidarity with Palestine not only stems from fighting a similar struggle themselves, but also because of a mutual oppressor, Britain.

Today the biggest challenges both people’s face are rooted in the remnants of partition and systems of oppression that the British are responsible for. From the partition of Ireland and the crafting of its imperialist Northern Ireland in 1921, to the British mandate of Palestine and its bloodstained Balfour Declaration that led to the creation of the settler colonial state of Israel in 1948.

''Both the partition of Ireland in 1921 and the partition of Palestine in 1948 were enthusiastically pursued by the British, as Northern Ireland and Israel, rooted in English-Protestant settler colonialism and Israeli-Jewish settler colonialism could now act as convenient outposts for British imperialist interests. What also unsurprisingly accompanied these new imperialist outposts was British manufactured violence, cultural imperialism, deadly sectarianism and the persecution of native Irish and Palestinian populations.''

Historically Ireland was the first country to be invaded by England in the 12th century, with England brutally claiming it as its first ever colony and unleashing over 800 years of English barbarity against the Irish people. This was regarded as being an integral part of the English imperial system, and considered its ‘laboratory’. Indeed, the structures, policies and ethnocentric ideologies crucial in the longevity of the British Empire’s existence were first formulated in Ireland and then later used for centuries on other peoples and territories around the world.

The beginning of the 20th century was a critical point in both Irish and Palestinian history as populations were simultaneously resisting occupying British forces on their own soil. This threat was so great that Winston Churchill, the British governments Secretary of State and War at the time, set up and deployed the ‘Black and Tans’ in 1920. These were British paramilitary thugs sent to both Ireland and Palestine with the sole purpose of crushing independence efforts through violence, including torture and extrajudicial killings.

The unfathomable brutality inflicted by the Black and Tans was shortly followed by deadly partitions that have fuelled decades of violence.

Both the partition of Ireland in 1921 and the partition of Palestine in 1948 were enthusiastically pursued by the British, as Northern Ireland and Israel, rooted in English-Protestant settler colonialism and Israeli-Jewish settler colonialism could now act as convenient outposts for British imperialist interests. What also unsurprisingly accompanied these new imperialist outposts was British manufactured violence, cultural imperialism, deadly sectarianism and the persecution of native Irish and Palestinian populations.

Britain has played an irrefutable role in not only igniting the violence inflicted on Irish and Palestinian civilians, but in also doing this through its illicit role in the arms trade. At the height of the troubles, rubber bullets were invented by the British Ministry of Defence for ‘riot control purposes’ in Northern Ireland where they were first used in 1970. Since their creation, it is estimated that over 55,000 rubber bullets have been fired by British forces in Ireland.

Rubber bullets were also used by apartheid forces in South Africa in the 1980’s. Now, they are being used by Israeli occupation forces on Palestinians. According to B’Tselem, over 19 Palestinians, including 12 children were killed by supposedly ‘non-lethal’ rubber bullets between 2000-13 alone.

The parallels between the experiences of Irish people and Palestinians, is also in their resistance. In 2010, nine Irish activists from Derry successfully shut down a Raytheon factory in Northern Ireland, in direct response to the bunker bombs they made that were used to massacre civilians during Israel’s invasion of Lebanon. A decade on, this has inspired the same action against Israeli arms factories in Britain.

In 2020, Palestine Action was formed by activists who use direct action to shutdown Israeli arms factories that operate across Britain. They target Elbit Systems, Israel’s largest private arms company, by consistently occupying its factories and offices, and so far have already managed to permanently close one. They have also lost Elbit over £280 million in contracts.

The question of religion

Often the political situations in both Ireland and Palestine are distorted and reported as being ‘religious conflicts’, whether the angle is ‘Catholic vs Protestant’ in Ireland or ‘Muslim vs Jew’ in Palestine. This tactic is often used by the oppressor to prolong their interests by blurring the aim of a struggle in the eyes of onlookers. In reality, the settler colonial and imperialist role of the British has always been the point of contention in Ireland, as has the settler colonial and occupying role of Israel in Palestine. It is not all about religion, but all about anti-colonial struggle.

The question of religion is only appropriate when referring to the discrimination and persecution of Catholics in Northern Ireland who identify as Irish, whilst the Protestant population identify as British. Today in Northern Ireland over 93% of schools are segregated and 94% of housing is segregated, and a disparity exists between the lack of housing for Catholics compared with the excess of housing for Protestants.

💜 Well done to the Armagh Branch of IPSC for their New Year's Eve Vigil for Palestine. #FreePalestine pic.twitter.com/UPmNPk4rGs

Northern Ireland is a state crafted by Britain with the intention to outlaw Irish identity, and in particular the Irish language. Irish was only finally recognised as an official language in Northern Ireland a few weeks ago, after decades of efforts by activists. Again, the Palestinian parallel is ever poignant with Israel’s latest decision to further downgrade the official language status of Arabic, going so far as changing native-Arabic location names to the renamed Hebrew versions, just spelt with Arabic letters.

We are at a pivotal point in history where both governing bodies in these imperialist crafted states, from Stormont in Northern Ireland to the Knesset in Israel, are failing to function as a tool of settler colonial rule that they were always designed to be. Israel has just had its fifth general election in less than 3 years following widespread political corruption and political stalemate. Whilst Sinn Fein, an Irish Republican party for the first time in Northern Ireland’s century-old history, were the democratically elected majority in Stormont following a general election in May 2022.

The Democratic Unionist Party (DUP), a party with a long history of racism and discrimination against the Irish/Catholic community as well as a great relationship with the Israeli government, refuses to accept this democratic result and is now boycotting power-sharing in Stormont and has left the people of Northern Ireland without a government since the election result.

Time has run out for both of these states, it is clear why and who they were established to serve, and now the calls for a united Ireland and a free Palestine are louder than ever.

Farrah Koutteineh is head of Public & Legal Relations at the London-based Palestinian Return Centre, and is also the founder of KEY48 - a voluntary collective calling for the immediate right of return of over 7.2 million Palestinian refugees. Koutteineh is also a political activist focusing on intersectional activism including, the Decolonise Palestine movement, indigenous peoples rights, anti-establishment movement, women’s rights and climate justice.

Farrah Koutteineh
Recent Articles
British classrooms are a battleground for Israeli propaganda
30 Nov 2022
Balfour: Britain's role in the colonisation of Palestine
31 Oct 2022
Starmer and Truss are accomplices to Israeli apartheid
05 Oct 2022
Why Palestinians will not be mourning the Queen’s death
20 Sep 2022
View More
More in Opinion