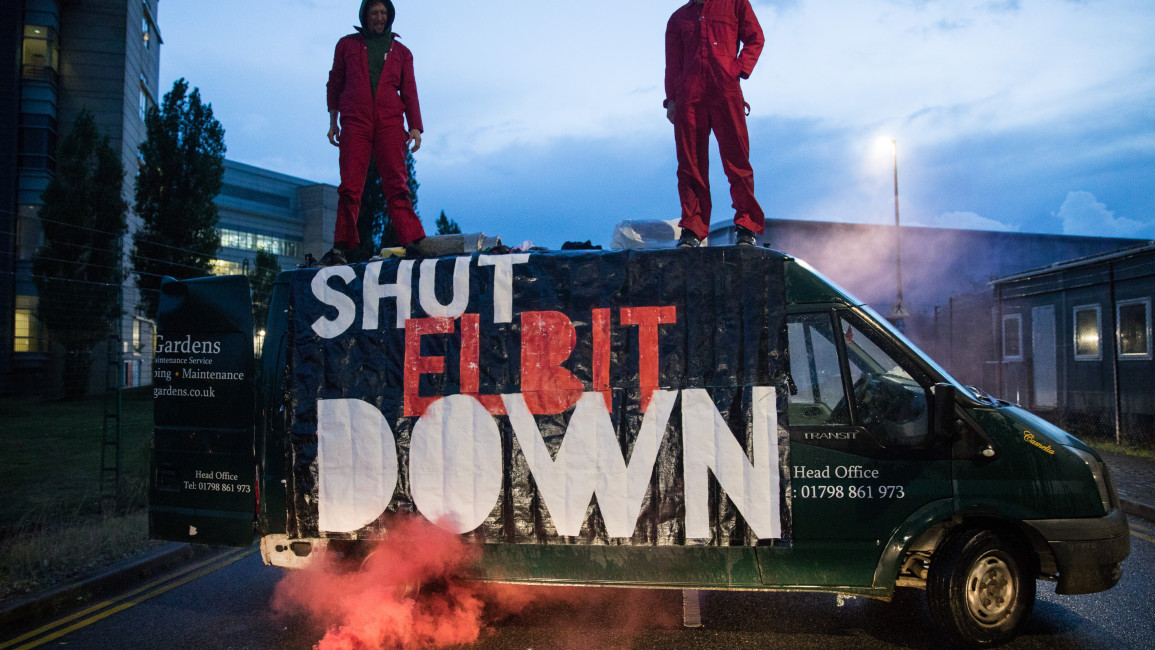 Two Palestine Action activists on the roof of a vehicle used to block an entrance to the Instro Precision, a subsidiary of Elbit Systems, factory on 4 October 2021 in Sandwich, United Kingdom. [Getty]

It’s official. Elbit Systems, Israel’s largest arms firm, has been booted out of a lucrative £160 million contract with the UK Ministry of Defence to deliver training to the Dreadnought submarine programme.

A second and equally lucrative commission called ‘Project Selborne’, which would have offered training to Britain’s Royal Navy, is also on the brink of collapse. In total, these two revoked contracts will lose Elbit over £280 million in the space of just one month.

The news was confirmed by Alex Chalk, Britain’s Defence Procurement Minister, in response to a series of parliamentary questions set by three Labour MPs. Mr Chalk explained that the decision to remove Elbit from the contracts came down to the need to reapply “operational sovereign standards for the UK’s highest priority capabilities”.

Elbit had initially acquired these contracts by working with a consortium of other arms companies, most of whom were similarly of foreign origin. The syndicate was dubbed ‘Team Elbit’. However, Elbit, now viewed as a liability, finds itself dropped from the team.

"The success of direct action as a method of operation is clear, but the knock-on additional impact should not be underestimated"

Questions were also raised about the status of Elbit’s remaining contracts with the UK Ministry of Defence, including one of their largest contracts valued at approximately £100 million. This would have provided the British Armed Forces with ‘Dismounted Joint Fires Integrators for Joint Terminal Attack Controllers and Fire Support Teams’. This contract is also being ‘reviewed’.

The fall-out between Elbit and the British state — a relationship that spans over a decade, comes after an intensive and sustained direct action campaign by Palestine Action to shut the arms company down and destroy its reputation.

Targeting all its British-based factories and offices, our activists have systematically disrupted Elbit’s ability to keep its production line running smoothly — from occupying the sites, to damaging property & sabotaging actual munitions, to using their own bodies to blockade every premises, week after week.

The campaign to #ShutElbitDown, now approaching its third year, has already forced the closure of the Israeli weapons manufacturer’s Oldham factory, as well as its London headquarters. The success of direct action as a method of operation is clear, but the knock-on additional impact should not be underestimated. Palestine Action has in turn caused one of the world’s most powerful arms companies to lose over £280-million-worth of contracts.

'Can you stop us or will we stop you?': Inside Palestine Action, the group shutting down Israel's largest weapons company 👇https://t.co/IPIFhkqE6n

Since Palestine Action’s launch, over 100 direct actions have taken place against Elbit’s factories, offices, partners, landlords and suppliers. For every action that takes place, the name of Elbit is forced into the public sphere, exposing it for what it is: a company of war criminals who profit from the destruction of Palestine.

Every action creates evermore negative press and helps to sully the brand. For a company who covertly operates behind closed doors and out of the limelight, its criminal activity has suddenly become centre stage for all to see.

Such reputational damage negatively hits head on and, in turn, reinforces the notion that people of conscience across the country are willing to sacrifice their liberty to force it out of business.

Bad press and constant irreparable attacks extends to Elbit’s partners, including Thales, APPH and Arconic. In short, it’s become widely known that, if you work for Elbit, Palestine Action won’t be far away.

Taking on Goliath: How Palestine Action drove Elbit out

Every time our activists target Elbit’s sites, the company is obliged to report the security breach to Britain’s Ministry of Defence. Embedded in state contracts is a clause which allows for renegotiation or even termination if the firm’s security is breached.

Palestine Action has slipped through its state-of-the-art fortifications and 24-hour surveillance dozens of times. We have essentially become Elbit’s worst nightmare.

"When a state throws its might against an effective direct action group, with the aim to disband it, and fails, it’s confronted with a dilemma. At what point does it tip from protecting Israel’s arms industry at all costs, to refusing to sacrifice its own national security?"

In June, Palestine Action Scotland occupied its headquarters in Glasgow. After scaling the roof, activists broke into the building and [allegedly] destroyed a periscope destined for a British nuclear submarine — the same brand of submarine that Elbit is no longer employed to work on.

Despite endless amounts of money spent on fortifying its premises and employing unmarked security guards, efforts to keep Palestine Action out have been unsuccessful, while repair costs have been a major strain on Elbit’s profits.

But, to achieve significant victories, there are drawbacks. Palestine Action have had to contend with police regularly raiding their homes and disproportionate charges being brought against us.

Activists have also been grievously assaulted by both the police and private security guards, remanded in prison or been slapped with ridiculous bail conditions. However, despite the severe crackdowns, we have continued on, relentlessly.

Putting down my pen and picking up the sledgehammer

Charges which have ended in trials have also led to mass acquittals. Just two weeks ago, Palestine Action’s first Crown Court case saw a jury unanimously declare all 5 activists ‘not guilty’ after they sprayed Elbit’s former London HQ with rivers of red paint. The verdict came after hearing indisputable evidence that Elbit is guilty of war crimes.

When a state throws its might against an effective direct action group, with the aim to disband it, and fails, it’s confronted with a dilemma. At what point does it tip from protecting Israel’s arms industry at all costs, to refusing to sacrifice its own national security?

The downfall of Elbit is near, but there must be no room for manoeuvre. It cannot be allowed to rebuild its reputation. People must take this opportunity to multiply their efforts and keep bashing the brand until it vacates British soil once and for all. Economic sabotage works.

Huda Ammori is a co-founder of the direct action network Palestine Action and has conducted extensive research and campaigns targeting British complicity with Israeli apartheid.

Ammori
Recent Articles
Taking on Goliath: How Palestine Action drove Elbit out
28 Jun 2022
Palestinians remind us the right to protest is ours
02 Jun 2022
Learning from the failures of the Iraq war
09 May 2022
4 ways you can show solidarity with Palestine this Ramadan
14 Apr 2022
View More
More in Opinion