Is it too late for comedian Baddiel’s apology over racism?

Is it too late for comedian Baddiel’s apology over racism?
Voices
6 min read

Richard Sudan questions the timing and sincerity of comedian David Baddiel’s apology for his racist depictions of ex-footballer Jason lee, since it not only took 25 years but also happened against the backdrop of his new documentary on anti-Semitism. 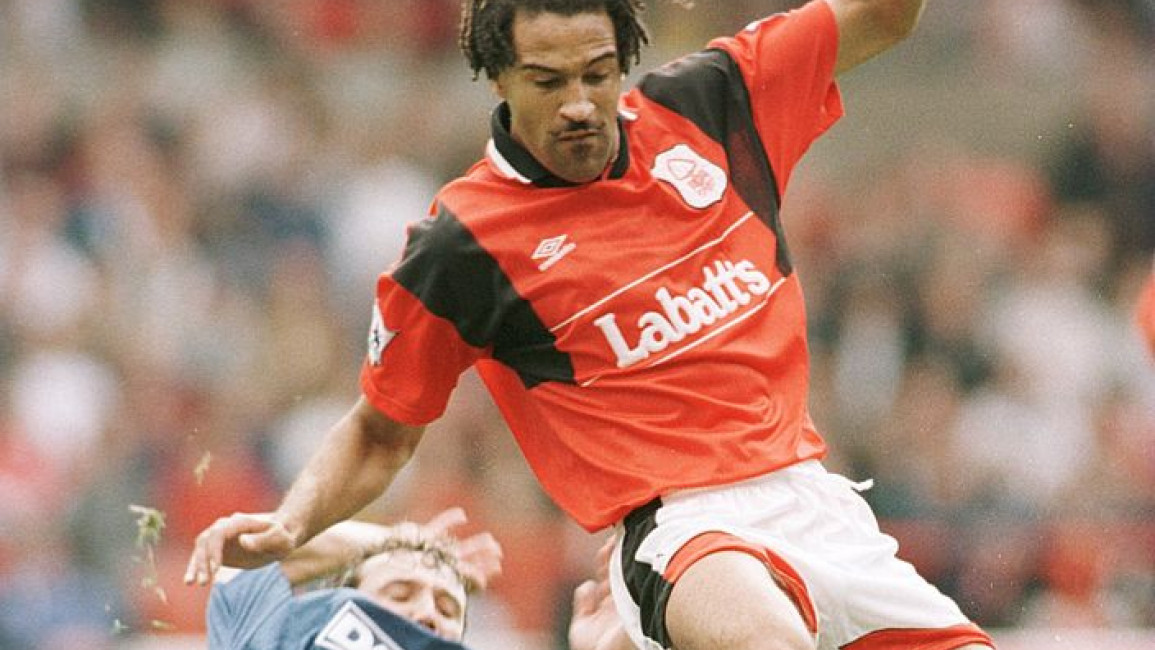 David Baddiel would dress up in blackface with a pineapple on his head mocking black footballer Jason Lee on the BBC’s Fantasy Football League, writes Richard Sudan. [Shaun Botterill/ALLSPORT/GETTY]

Blackface has a disturbing history of violence associated with it as well as being a deeply offensive and racist caricature of black people and black culture.

The ridicule of black people has survived the test of time, and is part of their ongoing dehumanisation since slavery. It’s not a thing of the past, and in reality remains so acceptable, that celebrities and even politicians have indulged in blackface, with virtually no consequence beyond condemnation and a slap on the wrist.

When Canadian Prime Minister Justin Trudeau was found to have painted his face black in his twenties, parodying gross Western orientalist fantasises about people with darker skin, there were no real repercussions. He was forgiven and remains in office, despite failing to confirm how many times he had worn blackface in his younger days, suggesting that there may be more examples yet to be unearthed.

''The mocking of Jason Lee, which essentially amounted to racial bullying, continued and he even faced racist chants during football games. This all had a detrimental impact on Lee and his mental health. It also cast a shadow in the sense that Lee, who enjoyed a successful career as a footballer, was forever associated with Baddiel’s racist caricature of him.''

Howard Stern, Sarah Silverman, Ted Danson, Jimmy Fallon, Tiny Fey and many others are a few examples of other notable figures who seem to have found it funny to promote racist stereotypes about black people, perhaps comfortable in the knowledge that there would be no consequences for their actions.

The writers and stars of the UK TV show, Little Britain, Matt Lucas and David Walliams, have also faced criticism (although not much else) for using blackface in their ‘comedy’ sketches on multiple occasions.

This leads us to the case of another British comedian: David Baddiel and the former professional footballer Jason Lee.

Back in the 1990s, Baddiel, alongside Frank Skinner on the BBC’s programme Fantasy Football League, saw fit to dress up in blackface with a pineapple on his head mocking black footballer Lee, who would tie his locs to the top of his head during games.

The mocking of Lee, which essentially amounted to racial bullying, continued and he even faced racist chants during football games. This all had a detrimental impact on Lee and his mental health, which he has alluded to. It also cast a shadow in the sense that Lee, who enjoyed a successful career as a footballer, was forever associated with Baddiel’s racist caricature of him.

Baddiel comes across as an intelligent man, which makes it all the more difficult to sincerely accept his apology to the former player, which recently took place during an episode of Jason Lee’s podcast.

Some have given Baddiel credit for having the guts to finally apologise to Lee in person, albeit 25 years later, for the pain he had caused.

And to be clear, it does take courage to admit wrongdoing and sincerely acknowledge the hurt caused to another.

If the story had ended there, I might be one of those inclined to applaud Baddiel – I had always liked him, having watched his show as a kid.

However, to me, this looks to be in bad faith for several reasons. Namely, that the timing of the apology coincided with the airing of Baddiel’s Channel 4 documentary, Jews Don’t Count which he has been promoting.

It therefore very much all feels like an attempt to pre-empt the backlash he was likely to receive, by pushing a film delving into anti-Semitism, while having never apologised for his anti-black racism.

Would Baddiel have apologised if there was no documentary, in which he presents himself as an authentic, authoritative anti-racist? People can make up their own minds.

But, the proof that Baddiel simply does not get it, wilfully or otherwise, is in the film itself.

Anti-Semitism remains a serious problem in Britain, Europe, and indeed throughout the world.

But where Baddiel’s argument falls flat, is in his contention that there is a hierarchy of racism, in which anti-Jewish racism is at the bottom - a blind spot among UK progressives.

Baddiel himself is testament to the fact that the opposite is true. Anti-black racism is the one form of racism which consistently gets a pass, and Baddiel’s behaviour going unpunished and unaddressed and for so long reinforces this. It was not on a fringe channel that he was able to dress up in blackface and mock Jason Lee, it was the BBC, and all of his performative bullying was presumably signed off by producers.

Far from being criticised or compromising his success, on the contrary, it seems Baddiel’s career was bolstered by his mocking of Lee. This is the ultimate paradox at play.

Baddiel’s argument, that there is a blind spot among British leftist progressives regarding anti-Semitism is also up for question.

The Forde Report, which was triggered by allegations of anti-Semitism that plagued the Labour Party under former leader Jeremy Corbyn, did the opposite of revealing a hierarchy of racism in which anti-Jewish racism was treated as less serious than other forms of racism.

Europe's far-right shift: The targeting of Muslims in Sweden

The report concluded that there was a culture and hierarchy of racism within the Labour Party and that tackling Islamophobia, for example, was the lowest of priorities.

Baddiel’s 25 year in the making apology comes at a time when although monkey chants and other hate of this sort from the football terraces have largely been stamped out, such racism remains a visceral threat. We saw this in 2021 following the England team’s exit from the Euro competition.  England’s black players who missed crucial penalties were subjected to a torrent of racial abuse online following their loss.

Baddiel talks about anti-racists needing to unite and become allies, as one of the themes in his film.  And of course he is right. But real solidarity has to start with sincerity. For Baddiel’s apology to mean something, beyond a public opportunity for him to put right what he once did wrong, he now needs to back up it up with a commitment to eradicating anti-black racism. If Baddiel were to do this, he might find more of the fellow travellers he seems to be looking for in his documentary.