Europe's far-right shift: The targeting of Muslims and migrants in Sweden

Since the far-right Sweden Democrats took power a few months ago as they joined the new coalition government, their anti-migrant and islamophobic views have been shaping policy. This promises a dark future for minorities, writes Yasser Louati. 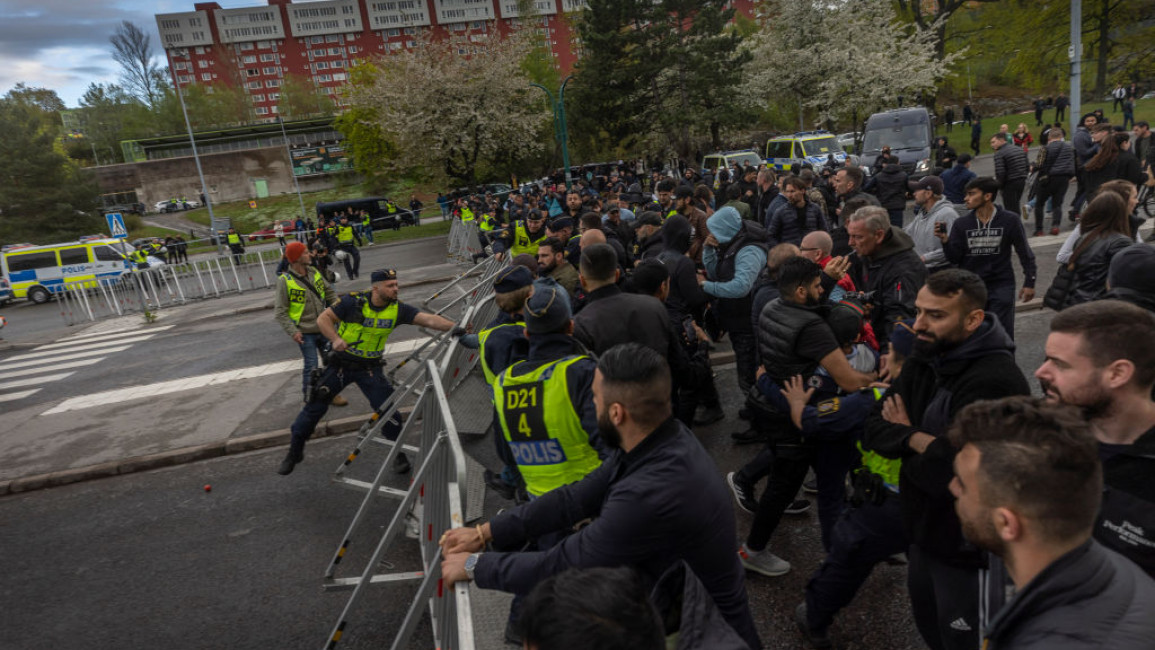 Counter-protesters gather against the burning of a Quran in Hallunda in May in Stockholm, Sweden. [GETTY]

When Sweden’s election results were confirmed, it was clear that they too had opened the gates of power to a far-right party: the Sweden Democrats (SD). The country has proven to be no different than France, Italy, Hungary, and Austria, where the far-right either makes up the majority of the political leadership, or enjoys several parliamentary seats.

It also follows the trajectory of using Muslims as the prime scapegoats for all the social, economic, and security issues.

The SD was founded in 1988, but was relatively insignificant until 2006. Since then, the Party, which has neo-Nazi and neo-Fascist roots even if it presents a polished image, has managed to influence public discourse and has made anti-Muslim policies so mainstream, that it is among the priorities of its new coalition government’s agenda.

Indeed the SD has a long history of hate-filled ideas. In 1994 the Party was in favour of banning all immigration from “ethnically distant cultures”, a racist stance that it later repackaged as opposition to “people outside the Western cultural hemisphere”.

''Despite the image it portrays to the rest of the world, that it is tolerant and even laughably one of the ‘happiest’ countries to live in, Sweden’s history is paved with racial discrimination against anyone who is not perceived to be Swedish. The Finnish speaking minority, Roma and Jewish communities have all experienced this first-hand.''

By the 2010 national elections, as Europe was grappling with the 2009 financial crisis and government public spending cutbacks, many Swedes felt growingly insecure about their revered welfare state. These fears soon translated into the far-right growing in numbers within Parliament. The SD took home 25 MP seats. In 2018, this number more than doubled and they won 62 seats.

In September, they won 20.5% of the vote and in doing so, became the largest bloc in the Prime Minister, Ulf Kristersson’s new government, with 73 seats.

An obsession with Muslims

The SD has an undeniable fixation with problematising Muslims, or as they put it ‘Islamism’ – perhaps to avoid being as explicitly racist as their politician Martin Strid who declared that “Muslims are not fully human”. On their website, within the political party’s manifesto in the sections entitled We want a united country and We want a safe society, is the declaration that: ‘We will never bow down to Islamism or any other form of extremism because Sweden is a land of democracy and equality.’

The influence of the SD’s anti-immigration and anti-asylum ideas, was clear to see during the PM’s speech in October, which announced the coalition government’s agreement.

It seems that in its bid to strengthen anti-Muslim laws, the SD and by extension the coalition, has been inspired by France’s anti-separatism law, which directly targets Muslims and their capacity to politically exist, as well as cracking down on Muslim institutions like private Muslim schools. In what is known as the Tido agreement, the Swedish government promised that, “[t]he Swedish Schools Inspectorate will strengthen its review of schools with a confessional focus, and forceful measures will be taken against extremism and radical Islamism.”

Moreover, to pit communities against one another but also weaponise certain vulnerable minorities, the government has also committed to prioritising the fight against antisemitism. It will do this through “an inquiry” that “will review prohibiting foreign financing of faith communities to counteract radical Islamism and separatism, among other things.”

It is a wonder how the PM charged with this task, who owes his position to a party with neo-Nazi foundations, expects to be trusted with such a task. In fact, things are so worrying, that others across the continent are concerned about them being in power.

As noted by Dr Farid Hafez, Visiting Professor of International Studies at Williams College, the shift from antisemitic to islamophobic attacks is common for all far-right parties in Europe today. There is a political risk with promoting antisemitism after the holocaust, but high political gains with peddling islamophobia – a shift most notably seen with the National Rally led by Marine Le Pen.

A history of targeting minorities

Sweden’s Civil rights Defenders, a human rights organisation based in Stockholm, described the Tido agreement as a source of concern. The racist narrative which they peddle within the coalition’s objectives, which equates immigration with crime and pressure on social services, doesn’t factor in that racial discrimination at work and housing are systemic, or that minorities did not strategically decide to live in segregated neighbourhoods, for example.

Clearly in Sweden, politics is not about reality but the perception of it and the latter has been heavily influenced by the far-right.

British classrooms are a battleground for Israeli propaganda

Despite the image it portrays to the rest of the world, that it is tolerant and even laughably one of the ‘happiest’ countries to live in, Sweden’s history is paved with racial discrimination against anyone who is not perceived to be Swedish. The Finnish speaking minority, Roma and Jewish communities have all experienced this first-hand.

In reality, the situation for Muslims and immigrants in Sweden is so troubling, that UN experts who visited the country in early November, called on it to “step up efforts to fight systemic racism and focus on strategies to restore trust between police and minority groups”.

The witch-hunt of Muslim public figures like Fatima Doubakil and Maimuna Abdullahi, who have paid the price of being labelled extremists by elected officials, are just the latest examples of the future reserved for those who dare to challenge islamophobia in Sweden.

History has taught us that often, mainstream parties that fail to address legitimate issues faced by the people they are supposed to serve, that instead focus on scapegoating minorities, become some of the most repressive regimes.

If some in Sweden are happy about Muslims and Migrants being ‘controlled,’ they should look to France as an example of what will soon follow such a trajectory, because it is all their civil liberties that will be threatened.