British classrooms are a battleground for Israeli propaganda

As pro-Israel stances become tougher to sell, those hoping to silence Palestine solidarity have resorted to enforcing a false 'neutrality' on British schoolchildren, writes Farrah Koutteineh. 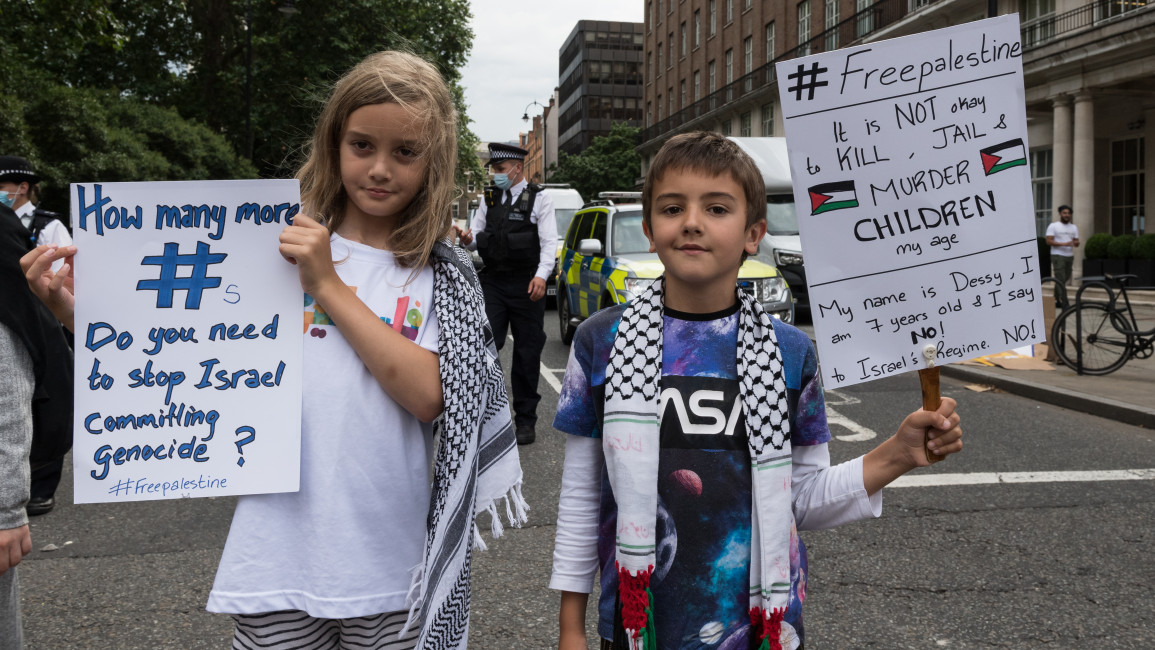 Students and pro-Palestinian demonstrators take part in a protest march through central London, calling for UK universities to divest from Israeli apartheid on 9 July 2021. [Getty]

Israel’s military assault on Gaza in May 2021, which killed over 260 Palestinians including 66 children, ignited unprecedented outrage all over the world, in a manner that Israel was not quite anticipating. The most unforeseen sites of outrage against Israel’s actions in Gaza were the classrooms and playgrounds of schools across the UK.

British school children from primary and secondary schools were coming out in huge numbers to express their solidarity with Palestine, be it through wearing keffiyehs, waving Palestine flags, holding protests on school grounds, and even making factsheets to educate fellow students on the reality of life under occupation.

This unprecedented solidarity was then met with an almost instant crackdown by school administrations and most notably the former Secretary of Education, Gavin Williamson. In response, school staff up and down the country came under national scrutiny and even legal action for their authoritarian crackdown on students expressing support for Palestine.

By restricting Palestine solidarity, school staff colluded with the national government in undermining these students' fundamental right to freedom of expression in a place that should be encouraging them to express their political opinions in a safe environment, free from intimidation and censorship.

"School staff colluded with the national government in undermining these students' fundamental right to freedom of expression in a place that should be encouraging them to express their political opinions in a safe environment, free from intimidation and censorship"

Staff across the UK were reported to have ripped up students' factsheets and posters, given students detentions, and even barring students from taking important exams, all because these students expressed their fundamental freedom of expression and stood with Palestine.

In a response to the outpouring of Palestine solidarity from British school children, Gavin Williamson, also a prominent member of Conservative Friends of Israel, wrote a letter to every headteacher in the country hypocritically reminding headteachers to maintain a ‘politically impartial’ environment within their own schools.

He then went on to reference three far from impartial organisations for school leaders to contact to broach the topic. All three organisations are staunchly pro-Israel, promote a line of thought that is not at all ‘impartial’, ignore Islamaphobia & anti-Palestinian rhetoric, and don’t have a single Palestinian staff member on any of the organisations’ boards.

One of the problematic organisations referenced was Solutions Not Sides (SNS), an organisation that promotes a ‘two-state solution’ and notions of ‘neutrality’, which are both inherently problematic when the realities on the ground for Palestinians are settler colonialism, occupation and apartheid, a reality void of two equal sides or a call for neutrality.

"Decolonisation has become a popular buzzword. But we must remember that it is not a metaphor, and it requires us to go beyond performative solidarity and mere theorisation."

Why student activism must lead the way in the #FreePalestine movement 👇 https://t.co/iKdlAAsluH

SNS, a registered charity in England and Wales, claim to offer a “critical approach to education on the Israeli & Palestinian conflict” for the small price of GBP 1000 for a 90 minute session for 20 students at a time, financed by the British taxpayer.

They also offer free resources on their website for teachers to use when addressing the topic of Palestine/Israel in class. This includes a handbook that encourages teachers to dismiss students claims like the claim that Israel is practicing apartheid by telling those students that they have a “simplistic and binary view of the issue”.

No acknowledgements is made that many reputable global human rights organisations like Human Rights Watch, B’Tselem and Amnesty International all have concluded that Israel is committing the crime of apartheid against Palestinians.

SNS resources also encourage teachers to adopt the problematic IHRA definition on anti-Semitism, which equates all criticism with Israel to anti-Semitism, and invites teachers to dismiss students references to Israeli colonialism as “misapplied within the context of Israel”.

Indeed ‘Solutions Not Sides’ has been strategically designed and deployed to completely distort the reality on the ground in Palestine; it seeks to indoctrinate schoolchildren, often in areas of the UK with Muslim majorities, with the illusion that ‘both sides have suffered’ and it is a ‘conflict’ between two sides of equal standing.

Solutions Not Sides exists to deprive school children, who are as they quote in their own handbook “in their opinion forming years”,  of not just an adequate education on what is happening in Palestine, but also of their right to form and express their own opinion.

The SNS speaker then proceeded to tell her classmates to not say ‘Free Palestine’ and to not take sides, but to be neutral. Jenin said she left the assembly feeling both upset and angry.

"But the reality that these organisations obscure is that there are no ‘two sides’ when it comes to apartheid, you can only choose justice"

“The Israeli speaker said she came from Europe to Israel and it’s her home now, but that’s at the cost of displacing Palestinians and stealing Palestinians homes, now I don’t have a home in Palestine, and that wasn’t mentioned, she completely invalidated what Palestinians go through on a daily basis by saying she, as someone who lives in Tel Aviv, goes through the same hardships as a Palestinian living in Gaza under military blockade, which is completely untrue.”

SNS is actually one programme of a far bigger organisation called One Voice. One Voice was founded in 2002 by billionaire Daniel Lubetzky, founder and CEO of the ‘KIND’ franchise, who has previously said the creation of One Voice was one of the best tools to undermine the Palestinian Boycott, Divestment, and Sanctions (BDS) movement, which aims to pressure Israel to comply with international law.

As mentioned on their own website, SNS has 29 partner organisations it works in conjunction with to spread this disinformation in places of education across the UK. The prolific involvement of the Israeli government in One Voice makes it abundantly clear that there is a coordinated effort to indoctrinate, repress opinions, and enforce a two-state solution narrative upon British schoolchildren.

But the reality that these organisations obscure is that there are no ‘two sides’ when it comes to apartheid, you can only choose justice. Thorough education, compassion and a yearning for justice is what needs to be taught in British schools when it comes to Palestine.

Farrah Koutteineh is head of Public & Legal Relations at the London-based Palestinian Return Centre, and is also the founder of KEY48 - a voluntary collective calling for the immediate right of return of over 7.2 million Palestinian refugees. Koutteineh is also a political activist focusing on intersectional activism including, the Decolonise Palestine movement, indigenous peoples rights, anti-establishment movement, women’s rights and climate justice.

Farrah Koutteineh
Recent Articles
Palestine and Ireland: A history of shared struggle
06 Jan 2023
Balfour: Britain's role in the colonisation of Palestine
31 Oct 2022
Starmer and Truss are accomplices to Israeli apartheid
05 Oct 2022
Why Palestinians will not be mourning the Queen’s death
20 Sep 2022
View More
More in Opinion