After nearly a year of arming Russia with drones used to destroy Ukrainian cities, it's time for the Islamic Republic to rethink its collusion in Putin's war, both from a strategic and moral perspective, writes Kourosh Ziabari. 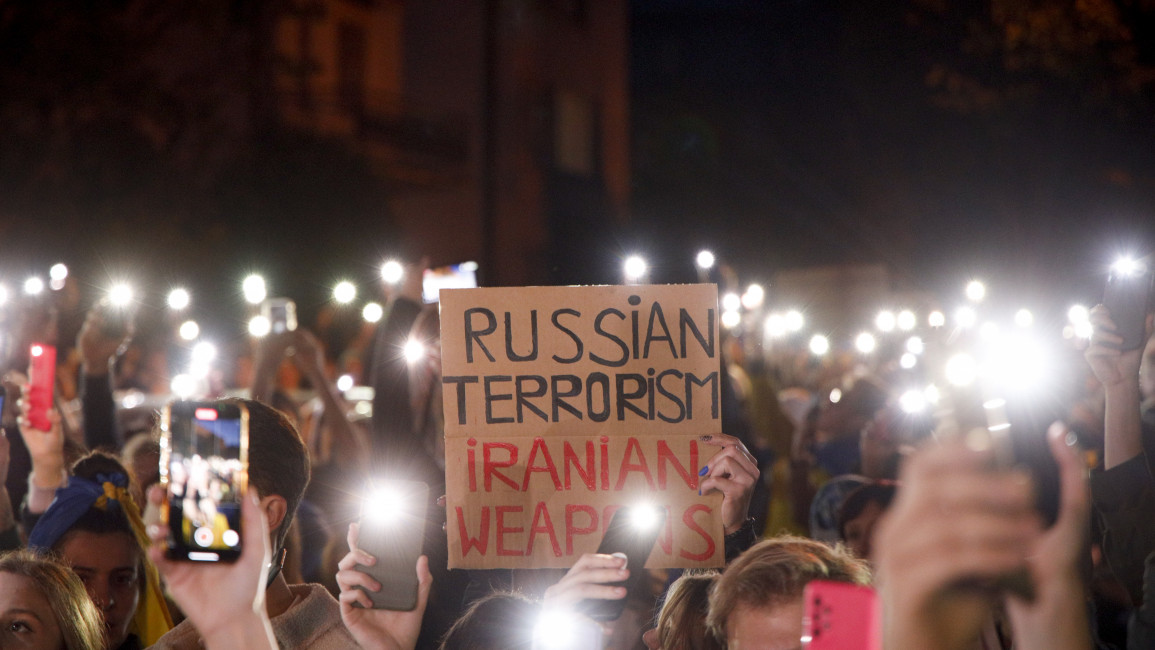 Protesters gather in front of the Iranian embassy to protest the supply of drones to Russia in Warsaw, Poland on 17 October, 2022. [Getty]

War in Ukraine rages on nine months after Russia initiated a full-scale invasion of its neighbouring country. The world has been shocked by the unfolding scenes of brutality, pillaging of towns and cities, mass burials, hospitals being shelled, and civilian infrastructure being knocked out by drones and missiles.

As the world celebrated the New Year, on social media Ukrainians were posting photos of their cities eclipsed in darkness as their access to electricity shrinks daily.

Damages incurred by Ukraine as a result of the war can amount to $700 billion by the end of the year, and the civilians are expected to live with power outages through mid-March.

Now, amid a humanitarian cataclysm characterised by the displacement of some 14 million Ukrainians, including 7.8 million refugees documented by the UN to have been forced into an exodus across Europe, a new unlikely actor is making a bad situation worse: Iran.

Shortly after war erupted on the eastern fringes of Europe, Iran, now led by an ultra-conservative, increasingly isolated president, inserted itself into the conflict by supplying drones and missiles to the aggressor in large volumes.

Tehran hoped that it could ingratiate itself with a veto-wielding UN Security Council member and win its tactical support in prospective feuds with the West.

When reports first emerged, Iran was in denial about shipping drones to Russia for several weeks. But on 5 November, it admitted for the first time that a “small number” of unmanned aerial vehicles (UAVs) had been exported before the February 24 invasion started.

However, President Volodymyr Zelensky of Ukraine accused Tehran of lying about the true scale of its involvement, saying his armed forces had been downing at least 10 Iranian-made drones every day.

Analysis: Ties between the two nations are at breaking point, with Tehran managing in three years to destroy three decades of friendly relations with Kyiv

There is a possibility that the administration of President Ebrahim Raisi and the Islamic Revolutionary Guard Corps (IRGC) have been out of step with each other in terms of equipping a sanctions-hit Russia with drones at a time few other countries were prepared to provide it with military and logistical assistance.

In the likely scenario, the IRGC, functioning as a nearly autonomous entity that doesn’t answer to the government but only to the Supreme Leader, had been taking the lead in funnelling drones to Moscow without letting the president and the foreign ministry know – and there’s longstanding precedent in IRGC circumventing the government on important foreign policy matters.

It was only when the reports about the drone shipments became public knowledge that the Foreign Minister Hossein Amir-Abdollahian, following several weeks of public rebuttal, apparently got confirmation from the IRGC and confirmed what the Ukrainian people had been saying about drones with Iranian names on them shattering their country.

Iran protests: The world must take action against executions

Given the secrecy surrounding Iran’s arms deals and the absence of transparent figures, it is not easy to say how many drones have been outfitted to Russia.

Yet, there’s no indication the Islamic Republic has been compensated for the deliveries, and it is quite likely these have been pro bono deals as Tehran seeks to endear itself to Moscow and secure its support for times of crisis.

The unfortunate reality is that these drone shipments, coupled with an equivocal rhetoric and continued references to NATO’s alleged role in provoking Russia into inevitable military action, have made Iran an unofficial belligerent in the conflict.

"In essence, if the Islamic Republic retained any loyalty to its ideals, it should have denounced the Russian aggression since day one"

The Islamic Republic, premised on an ideology of countering imperialism and global tyranny, is now apologising for and abating an imperial war that is merely aimed at subjugating a civilian population and pulverising their sovereignty.

I have talked to many Ukrainian journalists in recent weeks, and they’ve reassured me that the people of Ukraine draw a distinction between the Iranian government that is aggravating their ordeal through its collusion with Russia and the Iranian people who have been fighting for their freedoms and dignity over the past three months, squaring up to the same undemocratic government.

But what the Ukraine ambassador to the UN Sergiy Kyslytsya noted to me in an interview was that public perceptions of Iran have still declined markedly in his country, and that his people consider Iran guilty in these demanding times, exacerbating an already unequal battle.

The UN High Commissioner for Human Rights has recorded 6,826 civilian casualties since the beginning of the war to December 18. That’s indeed a cautious estimate. In addition, at least 100,000 Ukrainian soldiers are reported dead so far, making Russia’s military expedition a needlessly bloody war.

The Iranian government shouldn’t continue to partake in this bloodshed and draw international condemnation for itself at a time when the rest of the world has stood with Ukraine, rejecting Vladimir Putin’s ferocious ambitions.

In essence, if the Islamic Republic retained any loyalty to its ideals, it should have denounced the Russian aggression since day one, sticking up for Ukrainians enduring a ravaging war they didn’t call for.

The Iranian regime is sacrificing a whole new generation

Iran’s collaboration with Russia has already pushed Iran and Ukraine to the brink of diplomatic rupture on a number of occasions and continues to deprive Tehran of a reliable partner in Eastern Europe.

Any measures that continue to grease the wheels of Putin’s war machine are immoral and unjustified. The Russian leader has no moral qualms about ordering the worst kinds of treatment against the people of Ukraine, and a nation that claims to stand against imperialism shouldn’t be sponsoring him.

It is now time for Iran to take a new stance and reverse its detrimental role in Ukraine. No aspect of this war is defensible.

It’s a war of choice and a criminality that will dishonour the names of those involved in triggering and perpetuating it, and Iran shouldn’t play a part in upholding this travesty of justice.

Ziabari
https://twitter.com/KZiabari
Recent Articles
Iran protests: The world must take action against executions
14 Dec 2022
Iran: State vilification of protestors will not stop them
30 Nov 2022
The West is failing the Iranian people
04 Nov 2022
The Iranian diaspora is a powerful but complicated force
20 Oct 2022
View More
More in Opinion

Delaying justice for Grenfell puts all British homes at risk