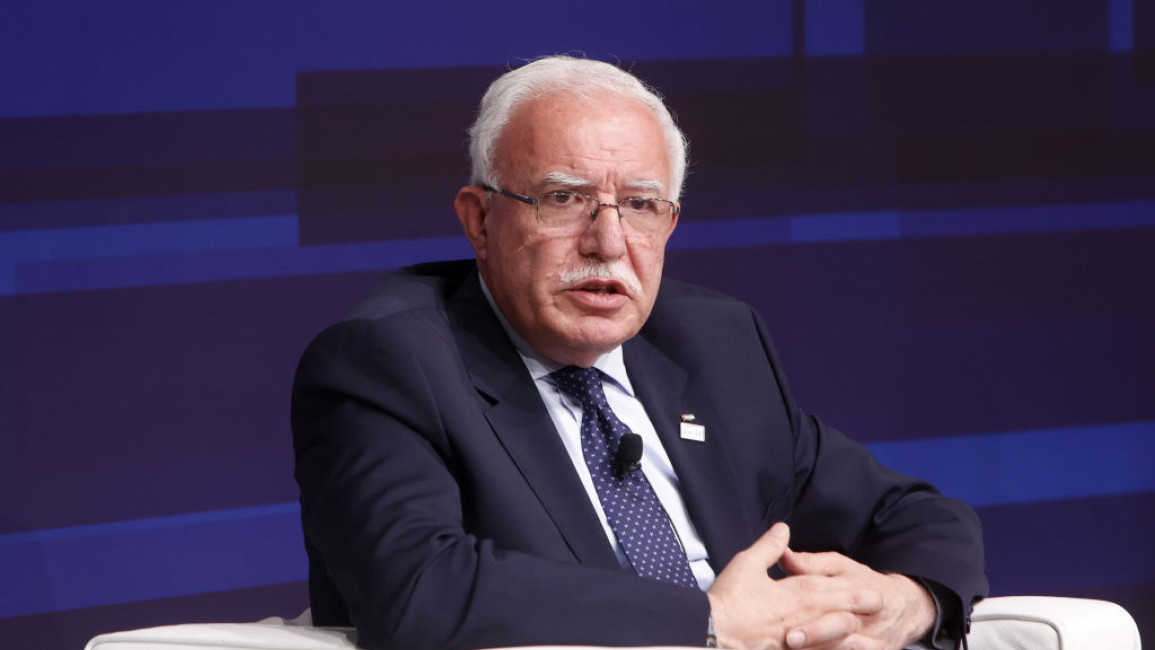 The Palestinian foreign minister said on Sunday that Israel revoked his travel permit, part of a series of punitive steps against the Palestinians taken by Israel's new hard-line government.

Riyad al-Malki said in a statement that he was returning from the Brazilian president's inauguration when he was informed that Israel rescinded his travel permit, which allows top Palestinian officials to travel easily in and out of the occupied West Bank, unlike ordinary Palestinians.

Israel's government on Friday approved the steps to penalise the Palestinians in retaliation for them pushing the UN’s highest judicial body to give its opinion on the Israeli occupation.

The decision highlights the draconian line the current government is already taking toward the Palestinians just days into its tenure. It comes at a time of spiking violence in the occupied West Bank and as peace talks are a distant memory.

In east Jerusalem, a flashpoint of Israeli-Palestinian tensions, Israeli police said they broke up a meeting by Palestinian parents about their children’s education, claiming it was unlawfully funded by the Palestinian Authority. Police said the operation came at the behest of National Security Minister Itamar Ben-Gvir, an ultranationalist with a long record of anti-Palestinian rhetoric and stunts. He now oversees the police.

The Palestinians condemned the revoking of Malki's permit, saying Israel should be the one being “punished for its violations against international law.” Israeli officials could not immediately be reached for confirmation.

Prime Minister Benjamin Netanyahu told a meeting of his Cabinet on Sunday the measures were aimed at what he called “an extreme anti-Israel” step at the UN.

On Friday, the government's Security Cabinet decided Israel would withhold $39 million from the Palestinian Authority and transfer the funds instead to a compensation program for the families of Israeli victims of Palestinian militant attacks.

It also said Israel would further deduct revenue it typically transfers to the cash-strapped PA — a sum equal to the amount the authority paid last year to families of Palestinian prisoners and those killed in the conflict, including militants implicated in attacks against Israelis. The Palestinian leadership describes the payments as necessary social welfare, while Israel says the so-called Martyrs’ Fund incentivises violence. Israel’s withheld funds threaten to exacerbate the PA’s fiscal woes.

The Security Cabinet also targeted Palestinian officials directly, saying it would deny benefits to “VIPs who are leading the political and legal war against Israel”.

Police alleged the parents' meeting was funded by the Palestinian Authority and attended by PA activists, which it said was in violation of Israeli law. Police said they prevented the meeting from taking place and that they were operating under an order by Ben-Gvir to shut it down. Police declined to provide evidence backing up their claim and a spokesman for Ben-Gvir referred questions to the police.

Ziad Shamali, head of the Students' Parents' Committees Union in Jerusalem, which was holding the meeting, denied there was any PA involvement, saying it was being held to discuss a shortage of teachers in east Jerusalem schools. He said he viewed the claim of PA ties as "a political pretext to ban" the meeting.

The Palestinian Authority was created to administer Gaza and parts of the occupied West Bank. Israel opposes any official business being carried out by the PA in east Jerusalem, and police have in the past broken up events they alleged were linked to the PA.

Israel captured east Jerusalem in the 1967 war and later annexed it, a move unrecognised by most of the international community. Israel considers the city its undivided, eternal capital. The Palestinians seek the city's eastern sector as the capital of their hoped-for state.

About a third of the city's population is Palestinian and they have long faced neglect and discrimination at the hands of Israeli authorities, including in education, housing and public services.