The brief occupation of the Gaza Strip is a lesser known chapter in Palestinian history, but is important to understand the ideological underpinnings of the ongoing Israeli occupation, writes Emad Moussa. 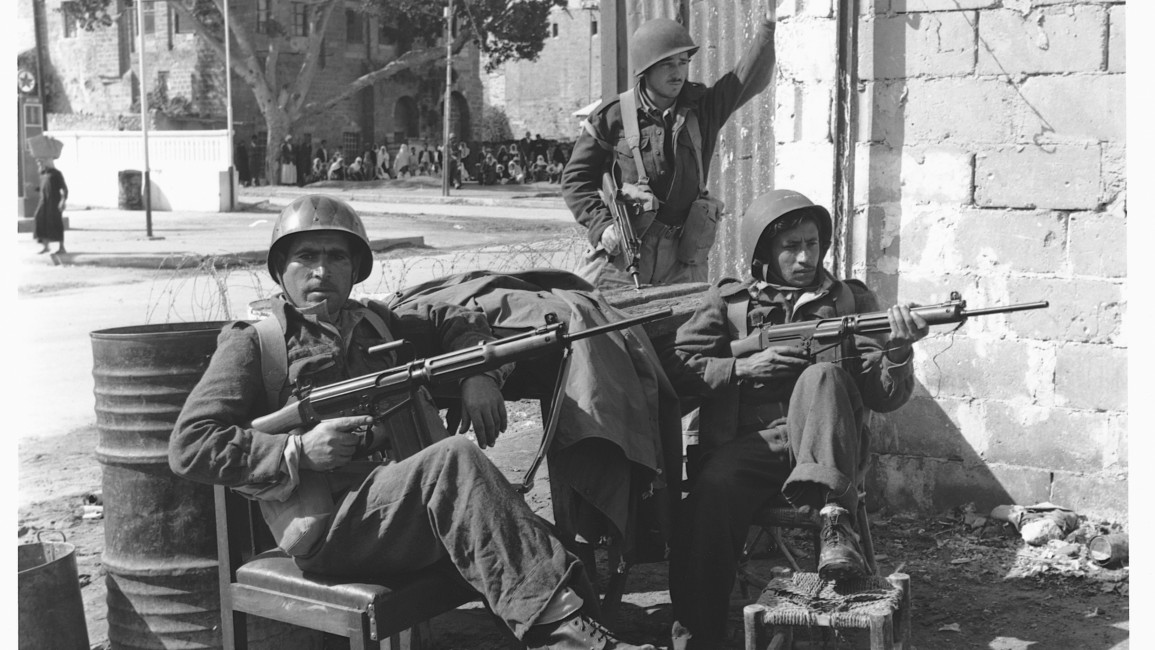 Three Israeli soldiers hold assault rifles by the side of a road in the Gaza Strip during the Suez Crisis of 1956. [Getty]

Sixty-six years ago this month, the newly established state of Israel participated in a joint military operation with Britain and France against Egypt, and in the process briefly occupied the Gaza Strip and the Sinai Peninsula.

The atrocities committed during that period in Gaza remain a less known chapter in the history of Israel's occupation of Palestine, but are nonetheless a critical component to better understand Israel’s ideological trajectory and today’s occupation.

In July 1956, Egyptian president Gamal Abdul Nasser nationalised the Suez Canal. The step aimed to generate funds to construct Egypt’s ambitious project of the massive dam on the Nile. Fearing Egypt would cut off the vital waterway, Israel attacked Egypt in late October, soon followed by a British and French invasion of the country in early November.

Named “the tripartite aggression” by Arabs, the operation effectively sought to overthrow Nasser, and for Israel specifically, the mission was to undermine the Cairo-based Arab nationalist resistance to Israel.

"The invasion of Gaza, then under Egyptian rule, was quick and decisive. The demographic reality in the conquered region, however, put a damper on Israel’s initial euphoria"

Despite initial military successes, the attack was short-lived and a political failure, thanks to international pressure mainly by the United States and the Soviet Union. The trail of blood on the streets of Egypt’s main towns like Suez and Port Said, however, was significant. For French-armed Israel, the trail was notably longer, extending from the Gaza Strip, across the Sinai Peninsula to the Suez, but concentrating in Gaza.

The Suez Crisis was the first time Israel took control of the Gaza Strip, marking the beginning of a four-month occupation. Yet, because modern Palestinian history was and continues to be defined by the current 1967 occupation, the 1956 events have somewhat receded in the local collective memory.

The invasion of Gaza, then under Egyptian rule, was quick and decisive. The demographic reality in the conquered region, however, put a damper on Israel’s initial euphoria. Nearly one-quarter of the Palestinians Israel had displaced during the Nakba were now in Gaza as refugees, representing two-thirds of Gaza’s population.

This was disheartening for the Israeli government, whose goal was the elimination of any physical traces of Palestinian existence and erasure of Palestinian memory, so they resorted to the same methods of brutality deployed during the Nakba eight years prior.

2022 is set to be the 'deadliest year' for Palestinians in the West Bank. Yet every time he presents a talk, or is interviewed in the media, @m7mdkurd is often met with questions where he is forced to justify the Palestinian people's right to resist Israeli occupation

In the towns of Khan Yunis and Rafah in southern Gaza, hundreds were massacred. After announcing a 24-hour curfew allegedly to maintain law and order, the Israeli army went on a killing spree, on occasions calling out young men to gather in an open area in the middle of town before murdering them with a barrage of bullets.

Locals speak of nearly six hundred people who were murdered in cold blood, a prospect that was also emphasised in Joe Sacco’s graphic novel Footnotes in Gaza. Sacco, who could not find enough information on the 1956 massacres, went to Gaza and interviewed the local population mainly in Khan Yunis, before turning the witness testimonies into a popular graphic novel that refocused the attention on Israel’s less known crimes against Palestinians.

A UNRWA official investigation found that 275 Palestinians were murdered by the Israeli army in Khan Yunis and its adjacent refugee camp on November 3, 1956. 111 others were killed at the Rafah refugee camp, including 12 local UNRWA officials, just over a week later.

The Israeli authorities claimed the deaths were only part of the army’s crackdown on local resistance, an account that contradicts both the official figures and eyewitness testimonies.

Consider that the Rafah massacre took place well after the UN mediated a truce. And, shortly after the Israeli withdrawal from the Gaza Strip, a mass grave was discovered in Khan Yunis containing the bodies of forty Palestinians shot in the back of the head with their hands tied behind their backs.

Today in Gaza, some believe that the land upon which Al-Shefah, Gaza’s main hospital, was built contains a mass grave for tens of people murdered by the Israeli army in 1956. This is yet to be ascertained, and is very likely to be.

Whichever justifications the Israeli army may have presented, it could not have meant anything for Palestinians but a continuation of the same motives that triggered the Deir Yassin massacre in 1948, a campaign of terror to force the population to leave the land.

The difference between 1948 and 1956 is that most people did not leave. Had they left Gaza to avoid Israel’s ethnic cleansing, they would’ve been locked out of their homeland permanently as millions of Palestinians are today.

"In retrospect, this brief episode in Israeli-Palestinian history is another example of the fact that Israel’s primary goal has always been the ethnic cleansing of Palestinians and illegal acquisition of territories"

Much has come to light since to prove that the Palestinian assessment was somewhat accurate. What we now know is that, originally, Israel had no intention to leave the Gaza Strip, but was forced to withdraw under strong international pressures and threats of sanctions.

Shortly before the invasion, Israeli prime minister David Ben-Gurion suggested in a secret memo to French PM Guy Mollet that Israel was after a “new order” in the Middle East. In addition to occupying and annexing both the Gaza Strip and the Sinai Peninsula, Israel wanted to oust Nasser and dismantle - and annex - South Lebanon. The Suez Canal, Ben-Gurion hoped, would come under international control, allowing Israel access to Jordan’s Gulf of Aqaba.

Tangible plans were already on Ben-Gurion’s desk to integrate the conquered territory into the Israeli state. Israeli workmen were seen laying new railway lines between Gaza and Israel. Plans were also formulated to change the Gaza currency from the Egyptian pound to the Israeli shekel.

And, short weeks before the withdrawal, the occupation authorities successfully formed a new Municipal Councils made of characters amenable to Tel Aviv’s policies.

Israel must be forced to lift its blockade on Gaza

Annexation, however, would have been fragile and dangerous to Israel’s “ethnic identity” had it come with the local population. The plan all along was to “resolve” the refugee problem, which from an Israeli perspective not only represented a demographic threat to the Jewish state, but also a reminder of Israel’s sinful inception.

Because the 1956 occupation was short-lived and Palestinians refused to leave, the plans to disperse, resettle, or transfer the population of Gaza - mainly to the Sinai desert - did not materialise.

In retrospect, this brief episode in Israeli-Palestinian history is another example of the fact that Israel’s primary goal has always been the ethnic cleansing of Palestinians and illegal acquisition of territories. Whenever Israel gave in and gave up territories, it was often because political realism and security concerns bore a heavier weight than colonial ambitions.

In fact, when the 1956 invasion is measured against other events in the history of Palestinian expulsion, it proves that the notion of “land for peace” was a self-righteous sentiment that Israel only deployed when the expansionist option was no longer viable.

"As for the occupied West Bank, Jerusalem, the Golan Heights, and Lebanon’s Shebaa Farms, Israel is under no pressure to abandon its colonial adventure"

There has not been a case where Israel willingly abandoned a territory purely for peace; it simply had to. Returning the Sinai Peninsula to Egypt in 1982 was worth it to neutralise Egypt as Israel’s most formidable enemy. The 2005 unilateral disengagement from Gaza, which remains an open-air prison, was an attempt by Ariel Sharon to avoid a pending demographic and military disaster.

Under the constant hits of the Lebanese armed resistance, PM Ehud Barak assessed that the price of keeping Southern Lebanon was much heftier than abandoning it in May 2000.

As for the occupied West Bank, Jerusalem, the Golan Heights, and Lebanon’s Shebaa Farms, Israel is under no pressure to abandon its colonial adventure. At this moment, neither Palestinian resistance nor international pressure is painful enough for Israelis to change course.

The wildfire of Islamophobia is burning through Sweden

Where are the heroes of the Arab Spring 12 years on?