Ali Adam traces the contradictory relationship between the Palestinian Authority and Israel over the years, explaining that despite the occupation benefiting from the PA led by Mahmoud Abbas, it still peruses a public demonisation of it. 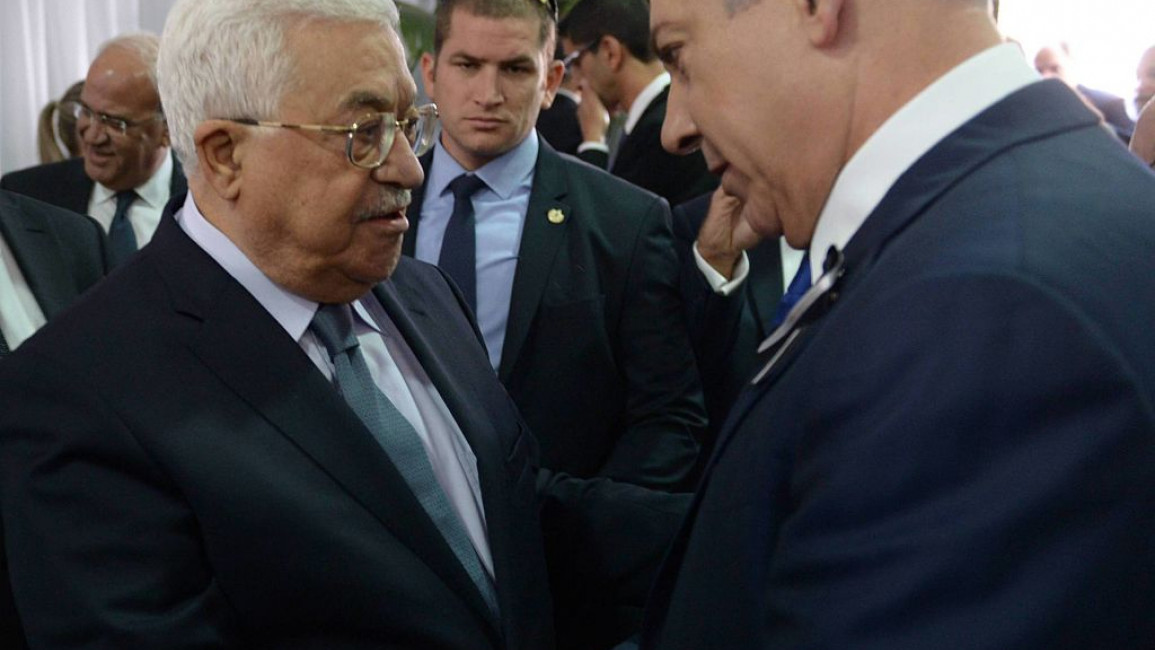 Recently, the head of the Shin Bet, the Israeli internal security services, Ronen Bar, alerted Prime Minister-Designate Benjamin Netanyahu of the possibility of the collapse of the Palestinian authority, according to Israeli reports.

Bar outlined the risk of a potential collapse of the Palestinian Authority, stressing that this development would lead to a further deterioration in the security situation in the occupied territories.

The Israeli military intelligence division, AMAN, also shared the assessment of concerns regarding the decline of the PA, according to the report.

Following these warnings, it’s expected that when he assumes office, Netanyahu will work diligently behind the scenes to strengthen the PA. He is expected to do so in line with the Biden Administration’s request amid the rising assessments that it’s on the verge of collapse.

''Israel, during the Abbas era, has had a complicated relationship with the PA. On the one hand, it’s constantly hailed behind closed doors by Israeli military and security establishments for preventing attacks against Israelis, and therefore Israeli officials diligently work to maintain the PA. On the other hand, the PA has been slandered and smeared in the Israeli public discourse and in the international arena.''

The Biden Administration’s efforts to support the PA are in contradiction with its predecessor, the Trump Administration, which weakened and cut aid to the Palestinian body.

There is a history of Israeli officials stepping in whenever the PA is weakened. For example, last year in the midst of a severe financial crisis for the PA, Israel pushed international donors to provide more aid for the Palestinians at a conference of donor countries in Norway.

Haaretz, in September, reported that the Israeli authorities are considering increasing their support for the PA’s security forces as well as stepping up financial assistance to them.

The repeated Israeli efforts to keep the PA afloat is, however, contradictory given the constant attacks and accusations it wages on the international stage.

For background, the PA was established in 1994 as part of the Oslo Accords to manage Palestinian autonomy in waiting for final status negotiations which it was hoped would pave the way for a Palestinian state, and help transition the Palestinians from occupation to independence. This however, never realised.

Israel reneged on virtually every clause of the peace agreements, and reduced the PA to a body that’s become a de facto subcontractor to the Israeli occupation. The PA has both policed the occupation on Israel’s behalf, and made it cost-free as the budget they receive from international donations, has covered the financial burden that the occupying state used to bear.

The PA President Mahmoud Abbas helped Israel maintain that situation, as since his rise to its leadership in 2005, he has abandoned armed resistance, and espoused a policy of full commitment to the Oslo Accords. Not to mention, a policy of pleasing Israel and the US, as much as possible.

Abbas argued internally that this will lead to a recognition of him as a peace partner, which will lead to steps in the way of Palestinian freedom and statehood.

This obviously didn’t happen, quite the opposite.

Israel simply used the PA and the Oslo Accords, to further entrench its settler-colonial enterprise in the West Bank and East Jerusalem, and further oppress the Palestinians.

Israel, during the Abbas era, has had a complicated relationship with the PA. On the one hand, it’s constantly hailed behind closed doors by Israeli military and security establishments for preventing attacks against Israelis, and therefore Israeli officials diligently work to maintain the PA. On the other hand, the PA has been slandered and smeared in the Israeli public discourse and in the international arena.

Israel demonises the PA in efforts to flee its obligations towards the Palestinian party that committed to the peace agreements. It vilifies them as anti-peace and ‘supporters of terror’, actively overlooking the variety of ways in which the PA benefited Israel’s security agenda.

One of the ways that Israel has done this, is through vague accusations, including of incitement materials in Palestinian school textbooks. Accusations that were debunked multiple times, including last year by an EU-funded report on Palestinian textbooks.

Israel has also levelled other accusations, none of the which had any credence. They were easily disprovable by the facts and just as importantly, they are belied by Israel contradicting itself and constantly begging the West to support the PA for security purposes.

Despite Abbas serving Israeli interests and going out of his way on many occasions to appease Israeli officials to the dismay of the Palestinians, he has been maligned and labelled a “diplomatic terrorist”, and has been accused of inciting hate and supporting terrorism. Abbas has been incessantly targeted in the Israeli political discourse to the point where Israeli officials and groups called for his assassination.

This situation represented a lesson for anybody that somehow assumed that the way to get rid of the occupation is through doing its bidding or appeasing the occupier. It also highlights that Israel will never accept, or tolerate Palestinians, no matter how much they oblige to their demands, or roll over to their wishes.

While Israel has enjoyed the PA’s existence over the years, it has by design, never allowed it to have any power that exceeds its Israeli-designated role to serve the occupation. For example, Israel doesn’t allow the PA to dig water wells, or set up solar panels to be able to generate electricity. It has also prevented the Palestinians’ access to their own natural resources, and it has stripped the PA of any ability to develop major domestic sources of income.

Israel has worked to keep the PA in this weak and extremely dependent state, where it’s only capable of fulfilling its role as a tool for the occupation, but not capable enough to establish any level of autonomy.

However, it’s up to the Palestinians to change that equation.

The Palestinians’ goal is to attain freedom, and the PA was established solely to achieve that goal. And Abbas’ acceptance for the PA to remain in its current occupation-friendly function shouldn’t be allowed to continue.

The PA must be transformed from a de facto subcontractor for the Israeli occupation to a body of resistance against it. The Palestinian people have the resilience and the creativity to take on this task, and the international community has an obligation to support them to achieve it – if only as compensation for guaranteeing and sponsoring the ‘peace’ agreements that led to this horrific situation.

But even if the Palestinians, in a worst-case scenario, are not able to transform the PA to a resistance body, then the whole thing must be shattered and Israel must assume the heavy financial and security burden of its military occupation.

Transforming the PA’s current status must take place immediately. This is especially urgent given the rise of the far-right and the expected introduction of these ultranationalist terrorism-associated groups in the next Israeli government, where they are expected to control the Israeli police and hold senior positions in the Israeli military. Whilst it is clear that the PA in its current state is unlikely to rise to this challenge, the most important factor that could determine the course of events is the rising Palestinian resistance.

Ali Adam is a journalist and researcher whose work focuses on issues linked to the Israeli-Palestinian conflict.

Adam
Recent Articles
With Netanyahu & Ben-Gvir Israel's far-right is here to stay
15 Nov 2022
Regardless of who wins Israel's elections, Palestinians lose
25 Oct 2022
Israel’s violence will worsen without international action
22 Oct 2022
Israel must be forced to lift its blockade on Gaza
08 Aug 2022
View More
More in Opinion