From Pegasus, to Shireen Abu Akleh’s killing, it is clear that there is little protection for journalists and their work when they expose the truth, this needs to change if we are to defend civil liberties worldwide, writes Adele Walton. 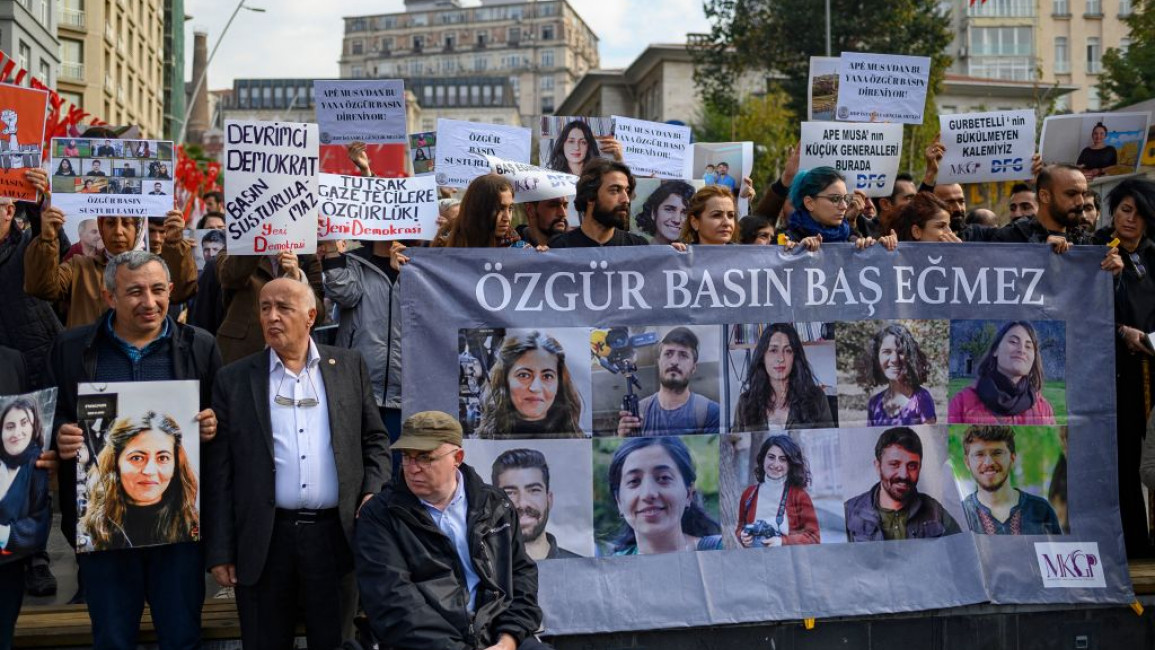 A protest against the arrest of journalists working for Kurdish media outlets including Mezopotamya news agency in Istanbul, on 31 October, 2022. [Yasin AKGUL / AFP via GETTY]

Concerns around digital technology and its role in democracy have been widely documented. Since the emergence of social media platforms and the rise of digital communications, journalists, academics and campaigners have been aware and vocal about the potential risks that these digital modes of communication expose us to.

The case of whistle-blower Edward Snowden, who lifted the lid on the inhumane surveillance activities of the National Security Agency, revealed just how intimately technology has penetrated our democratic freedoms, violating our privacy and our human rights in the process.

But for journalists, many of whom use their work as a way of exposing truths, whistleblowing on key issues and amplifying underrepresented voices, the online world poses a constant risk. The free speech rhetoric that often dominates contemporary discourse around social media and democracy, ignores how dissenting voices become easy targets for wider suppression and surveillance, and that social media platforms are actively used for this purpose.

''Today, it seems that technology and civil society are at loggerheads with each other. Spyware software and surveillance technology is increasingly being used by governments to suppress activism and impede on civil rights, whilst online platforms act as vital for exchanging information and constant news.''

In December, right-wing think-tank Policy Exchange, which was set up by Conservative MP Michael Gove, published a report regarding the recent Trojan Horse scandal in the UK – when a fake letter that detailed a plan to run a number of Birmingham schools using strict Islamic principles was leaked to the press. The report lists a vast number of journalists and academics who had used Twitter to criticise the affair, including Novara Media’s editor Ash Sarkhar, and Hamza Syed the journalist and co-host of the Trojan Horse Affair podcast.

It seems that social media has offered governments and lobbyists a whole new host of opportunities to surveil and suppress dissenting voices. For example, the Financial Times found out that one of their journalists had been tracked by TikTok in an attempt to unearth sources suspected of leaking confidential information, as well as a BuzzFeed journalist and a number of other users connected to the reporters of interest.

In Greece in November, the National Intelligence Service bought spyware software Predator. At least 13 journalists have been targeted by the technology so far, including Stavros Malichudis, an investigative journalist for Solomon, who covers refugees and migration.

A European Parliament committee investigating the use of spyware by EU governments criticised the Greek government's response to revelations that independent journalists were being surveyed. Though this is perhaps unsurprising given the country ranks 108th out of 180 countries in Reporters Without Borders’s 2022 World Press Freedom Index.

With spyware becoming an increasingly common and accepted tool for intelligence services in the digital age, it’s likely that journalists are going to experience more severe violations in the coming years, unless preventative legislation can keep up.

Conor Fortune from Front Line Defenders, a human rights organisation that researches and exposes governments and non-state actors who engage in digital surveillance, says: “In the digital age, journalists and human rights defenders face a new set of risks posed by their work online, in particular in the form of sophisticated digital surveillance, spyware and malware that can be used to track their activity and expose their sensitive information.”

The nature of investigative journalism, especially for those who write about human rights abuses and violations, puts journalists in an often dangerous, and certainly precarious position.

The Pegasus spyware scandal, exposed by Amnesty International and Forbidden Stories, revealed a large scale human rights violation that potentially targeted up to 50,000 phone numbers across the globe. It was reported that Pegasus, which had been installed on devices without owners’ knowledge, allowed clients to take complete control, reading messages, turning on the microphone and viewing users through the camera.

At least 180 journalists were surveyed with the Pegasus spyware technology, sold by Israeli company NSO Group to governments around the world. Targets also included human rights activists and politicians.

Indeed, in the wider context of the rise of the surveillance state, digital technology acts as yet another tool for increased suppression of activism and resistance to authoritarian governments.

Internet surveillance has become a critical issue for journalists, particularly those who actively criticise regimes online. In Turkey, for example, this intrusive surveillance has been translated into policy. In October, the government passed a swathe of new amendments known as the “censorship law”, introducing new abusive criminal speech offences that deepen online censorship and restrict access to information. This comes just months before the 2023 presidential elections during which much criticism has already been mounted against Erdogan.

The rising use of surveillance is also likely linked to the increase of detained journalists globally, with a record of 533 journalists currently detained worldwide. Unsurprisingly, journalists from marginalised backgrounds are more at risk. In half a year, 25 Kurdish journalists were imprisoned in Turkey.

#Turkey: 🇹🇷: RSF protests against the placement of exiled journalist #CanDündar on the Turkish Interior Ministry's "grey" list of wanted persons. In December 2020, he was sentenced to 27 years in prison for his coverage of arms transfers towards Jiadist groups in northern Syria. pic.twitter.com/LUuZUmy3b6

Women are also very vulnerable, particularly those who report on gendered rights. The events in Iran have highlighted how desperate the situation is, as following the murder of Kurdish-Iranian Mahsa Amini by the morality police, the two journalists who exposed her story, Nilufar Hamedi and Elahe Mohammadi, were detained. They are now facing the death penalty.

Today, it seems that technology and civil society are at loggerheads with each other. Spyware software and surveillance technology is increasingly being used by governments to suppress activism and impede on civil rights, whilst online platforms act as vital for exchanging information and constant news.

The killing of Shireen Abu Akleh during an Israeli raid revealed how journalists work in increasingly unsafe and unstable conditions, and how there is a real failure to protect them. Journalists have been vital in exposing the realities of state violence, surveillance and injustice everywhere, and it is therefore vital we protect them.

Collective organising through grassroots organisations, journalists’ unions and international organisations upholding and protecting free press is essential in defending the civil liberties and freedoms of all.

Adele Walton is an International Development graduate and freelance journalist, who has written for Jacobin, Tribune, openDemocracy, Vice, Dazed and more. She studied at the University of Sussex and wrote a dissertation critiquing the racialised logics of underdevelopment and good governance narratives. She is half Turkish and half British.