Whilst 2022 was a very tough year for refugees attempting to reach UK shores, it also ended with hope thanks to the resistance of migrants, activists and rights groups who even delivered victories. The fight must continue, argues Agustina Oliveri. 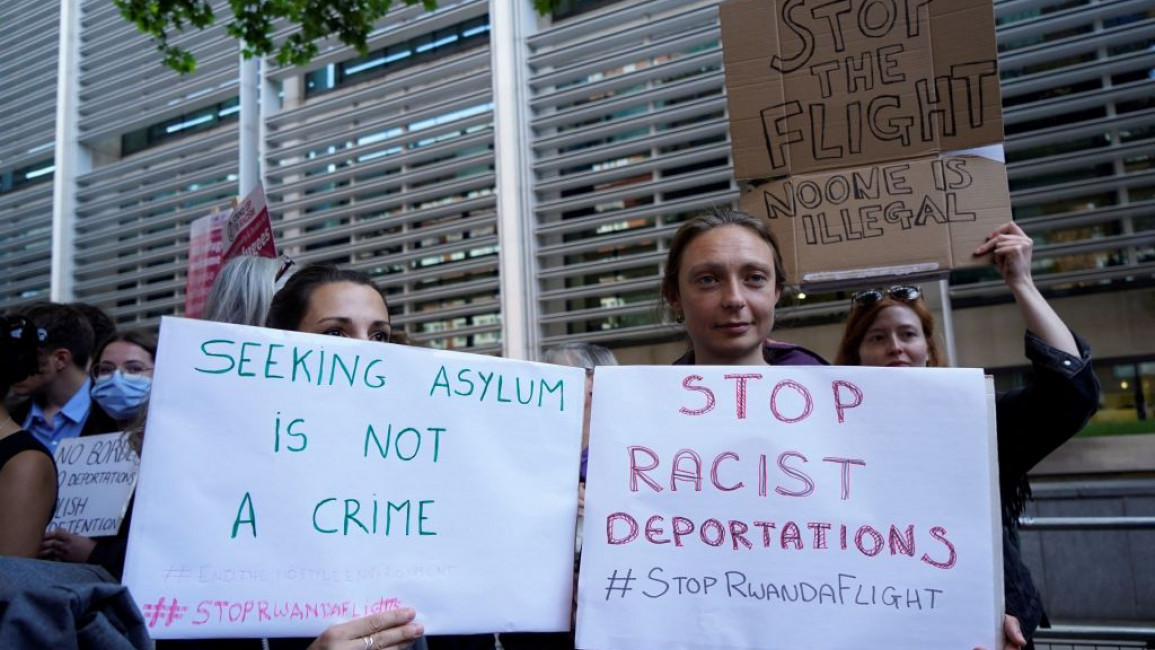 Protesters hold placards as they gathered outside the Home Office in London on 13 June, 2022, to demonstrate against the UK government's intention to deport asylum-seekers to Rwanda. [GETTY]

By the time news broke on 14 December, the dead were already being lifted out of the freezing water. In the early hours of the morning, a small dinghy carrying at least 43 people had capsized in the Channel, leaving desperate men, women and children fighting for their lives. Miraculously, 39 people were saved, down in no small part to the bravery of a crew of local fishermen who pulled at least 31 people to safety. But despite their efforts, four people, including a teenage boy, did not make it back to shore alive.

Last month’s tragedy came at the end of a hard year for refugees in the UK. Despite the best efforts of campaigners, in April the government passed the Nationality and Borders Act - known as the ‘Anti-Refugee Bill’, which introduced a range of measures aimed at making life as difficult as possible for people seeking safety from war and persecution in the UK.

Clauses of the act limit access to the asylum system for refugees who seek asylum in the UK through so-called ‘irregular’ routes. As safe routes provided by the government are inaccessible to most of the world’s refugees, this effectively criminalises anyone who makes their own way to safety in this country.

''Just one day before December’s Channel tragedy, new Prime Minister Rishi Sunak addressed Parliament and promised to introduce even tougher asylum policies. This included doubling down on the Rwanda scheme and banning anyone who arrives irregularly from ever claiming asylum in the UK, a proposal that was immediately condemned by the UN as violating international law.''

At the same time, the passage of the bill also allowed the government to sign the Migration and Economic Development Partnership with the government of Rwanda. Under this £120 million ‘cash for humans’ deal, survivors of torture and persecution could be forcibly removed from the UK and forced to seek asylum thousands of miles away in Rwanda. Despite widespread opposition, from the UN to the Archbishop of Canterbury to the now-King of England himself, it took a last-minute intervention from the European Court of Human Rights, to prevent the first flight from taking off in May.

And just one day before December’s Channel tragedy, new Prime Minister Rishi Sunak addressed Parliament and promised to introduce even tougher asylum policies. This included doubling down on the Rwanda scheme and banning anyone who arrives irregularly from ever claiming asylum in the UK, a proposal that was immediately condemned by the UN as violating international law.

But amongst the depressing developments have emerged glimmers of hope. Across the country, people from all walks of life have stood defiantly against this government’s cruel anti-refugee agenda. Soon after it was announced in April, Freedom from Torture launched the #StopTheFlights campaign to pressure airlines suspected of involvement in the Rwanda scheme to withdraw.

The final stop should be safety. Always.
Don’t let this government open the Rwanda line pic.twitter.com/SKzRofBdvL

In one of the campaign’s most notable moments, two survivors stormed the stage at an international aviation conference in Amsterdam, calling out Privilege Style in front of their industry for their involvement in the Rwanda scheme.

A week later, I flew out to Mallorca to deliver a ‘Worst Airline of the Year Award’ to Privilege Style’s Mallorca headquarters, before heading to the iconic football match between Barcelona and Real Madrid, Privilege Styles’ two largest clients, to let fans know the kind of airline their clubs were dealing with.

These actions were just the tip of a huge public mobilisation by caring people across the UK. Over the course of the campaign, tens of thousands of emails and phone calls were made to Privilege Style’s offices, urging them to do the right thing. And in October, after months of pressure, Privilege Style finally announced that they were pulling out of the scheme and would no longer fly refugees to Rwanda.

Last month, the UK High Court ruled that the Rwanda policy is lawful, although eight individuals threatened with removal did have their removal notices overturned. Appeals against the decision are likely and the legal process could drag on for some time but regardless, the victory against Privilege Style has shown that the power to stop this cruel policy lies with all of us.

With Privilege Style’s withdrawal, only two airlines remain involved with the Rwanda scheme, Portuguese airline Hi Fly and the Spain-based Iberojet. Torture survivors, refugee activists and campaign groups like Freedom from Torture are already gearing up for the battle to come. We urge anyone who wants a UK where people fleeing torture and war are treated with humanity and compassion to join us.

The wildfire of Islamophobia is burning through Sweden

Where are the heroes of the Arab Spring 12 years on?