The French state’s repressive response to Morocco’s glorious run during the World Cup showed how it is still re-living its colonial past, writes Nabila Ramdani as she recounts her experience in Paris during the tournament. 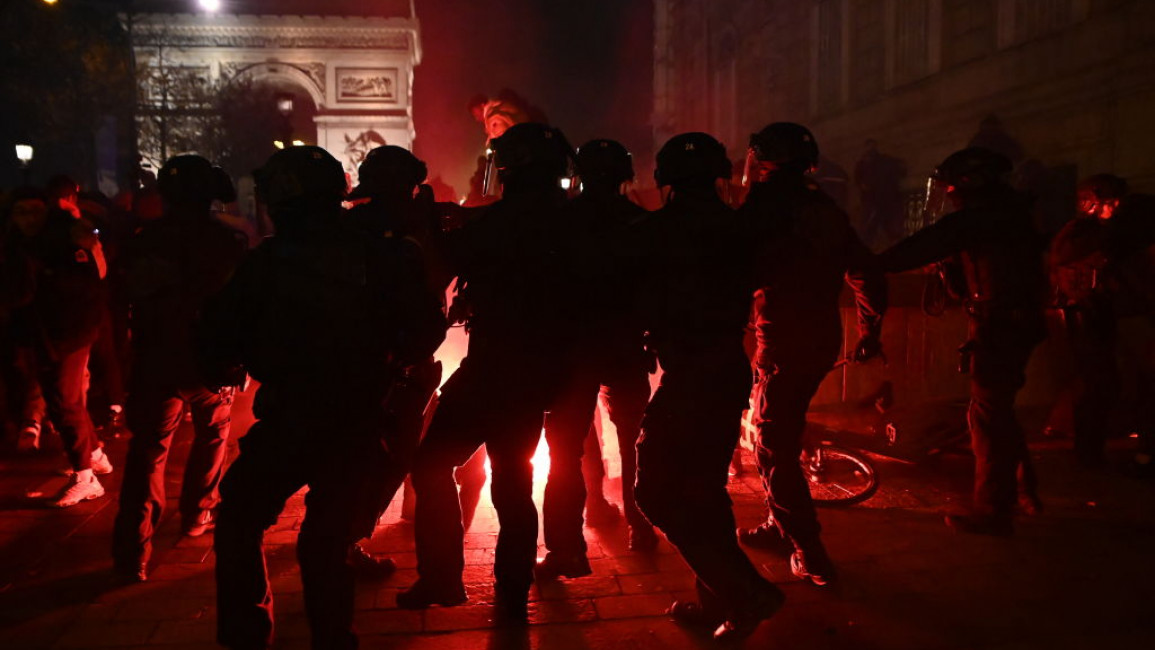 There was so much that was gloriously inspiring about Morocco’s World Cup run – superb goals, a fiendishly mean defence, and arguably the most passionate football supporters on the planet. The Atlas Lions may have lost their semi-final in Qatar, but they thrilled millions across Africa and the Middle East. Even neutrals in countries such as Britain and the USA shared their triumph at becoming the first Arab side to come within a couple of games of winning the most prestigious sporting competition after the Olympics.

In fact, there was only one country where there appeared to be resentment, and that was in France, Morocco’s old Imperial master. Having watched many of the World Cup games in Paris, I can vouch that post-colonial tensions linger, and the beautiful game was used as an excuse to pursue vendettas.

''When I went to the Champs-Élysées after the Portugal game, I witnessed the usual standoff between the hundreds of riot police on duty and Morocco fans celebrating their 1-0 win. The crowds of football supporters were impeccably behaved, before the heavily armed officers, all of them wearing body armour and full-face helmets, came in to view. Then the atmosphere became more febrile, and the police reacted with baton charges, and tear gas attacks.''

They first manifested themselves in the poisonous language used by bigots who spend so much time attacking Muslims, and especially French citizens they still view as immigrants. Singling out around 1.5 million of them who identify as French Moroccans, Jordan Bardella, president of the far-right National Rally (RN) party anticipated violence by saying that “some Moroccan fans are more animated by a feeling of revenge against France, than a sporting spirit.” He spoke of “thirty years of failure in terms of immigration policy, and especially assimilation.”

High profile figures in the Reconquête party went even further, describing France’s semi-final with Morocco as a “footballing clash of civilisations”. Éric Zemmour, Reconquête’s leader, is not just a former presidential candidate but also a high-profile TV journalist, who relished the chance to evoke Morocco’s troubled history.

The country was a French protectorate up until full independence in 1956 – a time when France was pouring all of its military might into trying to hold on to neighbouring Algeria, the jewel in its Empire. This was when all Muslim North Africans – or Maghrebians as they are better known – were viewed as a ferocious enemy. Algeria won its freedom through force of arms in 1962, but anger and bitterness remain.

Even the allegedly more moderate but increasingly reactionary Républicains stoked up the tension before the semi-final. Jeanne d’Hauteserre, Mayor of the French capital’s 8th arrondissement, which includes the Champs-Élysées, said “the most beautiful avenue in the world” would be torn apart because of the France-Morocco game.

World Cup & Spain’s uneasy relationship with its Muslim past

“On Wednesday, everyone is afraid of a war – a guerrilla war, a civil war – and we do not want the Champs-Élysées to be transformed into a battlefield,” said d’Hauteserre, suggesting it would be filled with “people coming to smash things up with iron bars”. Like so many other elected politicians, she even wanted a ban on cafés and bars showing the game.

Such draconian measures, combined with cataclysmic discourse, certainly had a chilling effect throughout the tournament. When I tried to watch the Morocco-Portugal quarter-final in the Café Rive Droite, a large sports bar in central Paris that advertised itself as showing “all matches,” I was told by staff that it was not being put on.

Referring to the city council, she said: “The Ville de Paris have told most places around here not to show the game, because of fears of disorder by Moroccan supporters. We’ve received an instruction.”

Myself and three other journalists, two from the UK, ended up being turned away from four other cafés which had also pulled the game for the same reason, before finally being directed to “the only one that was allowed to show it,” according to all staff members at the four other cafés. It was already full up, however, and surrounded by around 300 Moroccan fans standing on freezing pavements, as they caught glimpses of the action through the windows.

After compiling evidence of what had happened, including contemporaneous video and interviews, I posted a comment on Twitter, suggesting crass discrimination against members of Paris’s Moroccan community. Far-Right troll accounts immediately began attacking me, along with Ariel Weil, the Socialist Party mayor of Paris Centre, who accused me of spreading “fake news”.

Such Trumpian tactics are typical of those who pursue an agenda against those of us from Arab Muslim backgrounds. The myth is that we are all the same citizens of the Republic – free and equal – but discrimination can be as subtle as it is vindictive.

When I went to the Champs-Élysées after the Portugal game, I witnessed the usual standoff between the hundreds of riot police on duty and Morocco fans celebrating their 1-0 win. The crowds of football supporters were impeccably behaved, before the heavily armed officers, all of them wearing body armour and full-face helmets, came in to view.

Then the atmosphere became more febrile, and the police reacted with baton charges, and tear gas attacks. The cycle of violence is drearily predictable – each side incites the other to more malicious acts, as onlookers use social media to display the chaotic images to a shocked world.

Videos and photographs show extreme aggression by France’s forces of law and order being used against countless numbers of people across France, whether students or anti-government radicals.

All those involved can be as destructive as each other. The difference is that when brown-skinned targets linked to former colonies are available, it is far more venomous.

This represents a special kind of Gallic prejudice, and one that comes to the fore when football giants such as Morocco excel on the world stage.

Nabila Ramdani is a multi-award-winning French-Algerian journalist, columnist, and broadcaster who specialises in French politics, Islamic affairs, and the Arab World.