Farah Abdessamad celebrates the inclusion of Tunisian Harissa in the UNESCO Heritage list by recounting her personal relationship to it having grown up in France. She argues that amidst global attention, the condiment's essence must be preserved. 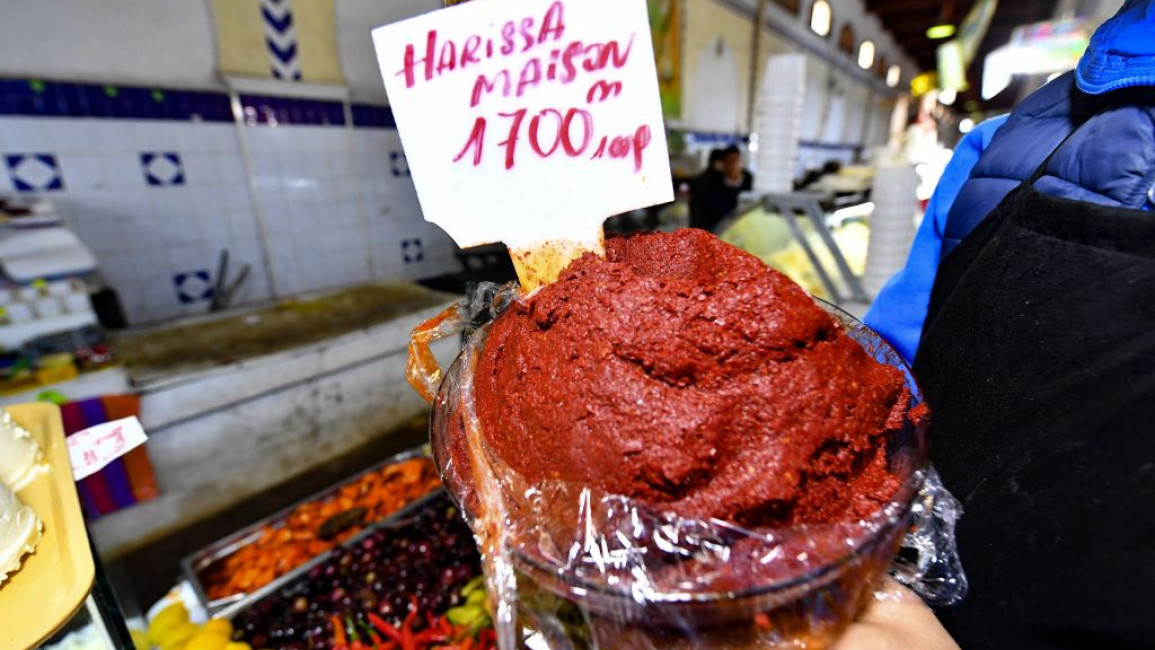 Tunisian harissa has officially joined UNESCO’s Intangible Cultural Heritage List, along with the French baguette, Algerian rai music, the Yalda/Chella ritual of Afghanistan and Iran. As of the 1 December the list grew to 678 elements representing 140 countries.

This news brought immense joy and pride to Tunisians, especially following our national football’s team elimination from the FIFA World Cup in Qatar – despite having won against France who are world champions. Furthermore, it comes amidst a year of rising economic hardships, deprivations, and political upheavals.

Harissa, a spicy condiment traditionally made from red chilies, garlic, caraway, salt, olive oil, and coriander, includes many local and seasonal variations. Whether home-made or industrially produced, harissa is a firm daily staple of Tunisian kitchens and stomachs, at home and in the diaspora.

I first came across garlands of sun-dried red chilli peppers during my first visit to Tunisia, my father’s native country, when I was child and we drove around the countryside. Before then, I remember stacks of Cap Bon harissa tin cans in our cupboards in France. When my father opened them to spice up his dish of makrouna, he would keep them fresh in the fridge with olive oil on top, congealed from the cold environment.

Harissa connects. It’s a symbol of togetherness and identity. Since the UNESCO announcement, many Tunisians have shared with me poignant, intimate stories of their grandmothers’ homemade harissa, family recipes and practices usually passed down from mothers to daughters.

Regrettably, I haven’t had that experience. Born into a mixed French-Tunisian family, my Tunisian grandmother Baya, passed away before she had a chance to transmit any coveted tips to my French mother who would go on to marry my father, a first-generation immigrant. It’s a loss I continue to mourn.

Against this absence, I primarily associate harissa with my father’s tin cans and tubes and the way chilli peppers would make one of his eyes cry and twitch. He always hid a little, until I visited Tunisia with him as a child. He hadn’t been home in a decade and he returned as a father with a child – me – in tow. It was a big deal.

We were offered a celebratory couscous to welcome us. During the festive occasion, I felt guilty that I couldn’t appreciate the dish. The spicy couscous was too hot for my tongue; I couldn’t eat more than a spoonful that day. My family – uncles, aunts, cousins I was meeting for the first time – laughed. My father took it upon him to instruct them to prepare a “couscous blanc” for me in future – a tame, harissa-less version of the dish, with olive oil.

Europe's far-right shift: The targeting of Muslims in Sweden

My failure to appreciate our signature sauce signalled that I was too French somehow. I felt short of expectations.

A sense of relief overwhelmed me when I was finally able to eat a couscous with harissa years later, a “real” couscous. I observed the proud looks of my father and his siblings as we gathered at the communal kitchen table to eat with our spoons from the single dish. They looked attentively while I kept going. I had graduated from a secret rite of passage. I was no longer foreign – I belonged.

When I studied for high school exams, I even rubbed in my hands the chilli-shaped coral pendant my father gave me to bring me good luck. It worked.

Indeed, Harissa was one of the markers that set us, children of Tunisian immigrants, apart in France. Our palates craved for more than the bland seasoning of traditional French meals. We had to wipe chilli paste from our lips before going on to movies, study dates, and other social events. We had to clean the stubborn stains off our clothes.

We absorbed the negative connotations attached to the label of “ethnic food,” sometimes used as evidence to demonstrate that we didn’t “integrate” enough. In my view, there was nothing to integrate. I was a French-born, French-raised citizen. I couldn’t comprehend why harissa should be considered more unusual or exotic than the stinky, oozing cheeses of some French terroirs.

This was all a while ago, before harissa become popular, sexy, and international. In the midst of the hummus renaissance, tajine craze, and neo-orientalist culinary fantasies, harissa suddenly became mainstream. Harissa has travelled out from individual kitchens to Trader Joe’s, Oprah Winfrey, sitting with bizarre “green shakshuka” recipes, za’atar mixes, and other wellness-infused concoctions.

Like many Tunisians living abroad I long for items and elements that remind me of home. I now live in New York where I rely on a local Indian grocery shop for my harissa supplies. Every other week, I pick overpriced Cap Bon tin cans from my childhood off the shelves while being confronted to a new and confusing choice of rose harissa, apricot harissa, Moroccan harissa and more.

It may seem anodyne but these “creative” adaptations and variants of harissa erase our Tunisian heritage. The paste is presented as Moroccan, North African, Mediterranean, or even Middle Eastern, as if provenance remains a highly-diluted notion, an after-thought. Some organic jars are priced $10 upwards per piece.

Harissa’s gentrification and appropriation in some of these circles are appalling for Tunisians attached to the comforts and cultural significance of a traditional recipe. It brings for them, and me included, an air of deja-vu with the slippery slope of chocolate and pumpkin spice hummus extravaganza.

Please don’t. We sincerely beg you not to take us on that awful ride.

If white people want to genuinely experience harissa, then by all means do experience the real thing which builds upon centuries of know-how, down from the Andalusian exile of forcibly converted Muslims in the 17th century, to summer fruit pickers and the untold, underpaid labour of Tunisian women today.

There’s always a bit of exile and tears in those cans, tubes, and jars – yet so much Tunisian life. This is the heritage we want to share with the world.

Farah Abdessamad is a New York City-based essayist/critic, from France and Tunisia.