The German Stuttgart Theatre withdrawing a Lifetime Achievement Prize from renowned play-right Caryl Churchill over her solidarity with Palestine, is an ongoing attempt to silence allies of BDS. This must be fought collectively, writes Zoe Lafferty. 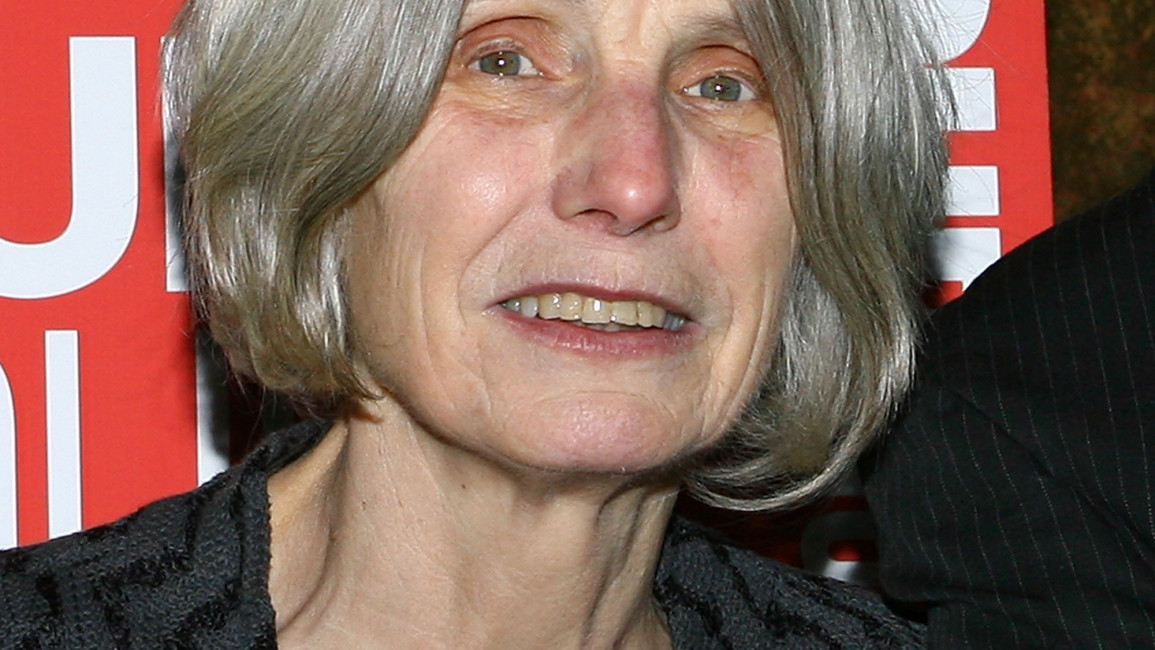 Caryl Churchill, a long-time ally of Palestine, had a Lifetime Achievement Prize from the Stuttgart Theatre in Germany, rescinded. [GETTY]

Against sounds of explosions Ahmed Tobasi, Artistic Director at The Freedom Theatre, films himself talking us through an invasion taking place in Jenin Refugee Camp, Palestine. Later, he arrives home to find three bullets fired through his bedroom window. If he’d been home during that day's incursion, he would probably be dead.

Meanwhile, I was attending an online meeting called to address a very different type of attack. Caryl Churchill, a long-time ally of Palestine, had a Lifetime Achievement Prize from the Stuttgart Theatre, Germany, rescinded.

A statement released by the jury announced, “we have become aware of the author's BDS signatures. There is also the play "Seven Jewish Children" which can come across as anti-Semitic.”

''The success of BDS has led the Israeli government to spend millions of dollars spreading misinformation that often leads to supporters of BDS and those advocating for Palestinian rights, being accused of antisemitism. The repercussions include the German parliament voting in 2019 to condemn BDS as antisemitism and numerous cancellations and slander of Palestinian artists and their allies in Europe, the UK and the USA. Author Kamila Shamsie, artist Walid Raad, philosopher Achille Mbembe, poet Mohammed el-Kurd, and former director of the Jewish Museum Berlin, Peter Schäfer are all amongst those targeted.''

Seven Jewish Children was written in 2009 in the aftermath of Operation Cast Lead, during which at least 1,383 Palestinians, including 333 children, were killed in Gaza. Opening at The Royal Court, it was directed, performed, and produced by a Jewish team. Director Dominic Cooke responded to criticism stating, “drawing attention to Israel’s human rights abuses and its illegal occupation of Palestinian territory is not antisemitic; it is legitimate protest.”

The Stuttgart Theatre’s statement that, “[i]nformation had become known over the weekend that the jury had not previously had,” feels particularly dishonest. Churchill’s support of Palestinian rights, BDS and her play are headlines in any basic Google search. Did such a prestigious jury which includes a theatre critic, established directors, and the former State Secretary in the Baden-Württemberg Ministry for Science, Research and Art, not spend a few minutes researching the person they were about to give a €75,000 prize to?

It’s particularly alarming to see Thomas Ostermeier, Artistic Director of the Schaubühne, as one of the jurors. I was there when he visited The Freedom Theatre, crucially supporting us in 2011 when Artistic Director Juliano Mer Khamis was murdered, and staff were imprisoned by Israel. He is well-versed in human rights violations happening in Palestine and the brutal challenges artists face. It makes his decision as a juror to rescind the prize, sighting Churchill’s support of BDS, all the more confusing.

Boycott, Divestment, Sanctions (BDS) is a non-violent, Palestinian-led global solidarity movement, which includes a call for Israelis to join. The goals - ending the occupation, full equality to the Palestinian citizens of Israel and the right of return of Palestinian refugees - adhere to international law. The cultural element targets complicity, not identity, urging artists and organisations to boycott events, activities, agreements, or projects involving Israel, its lobby groups or cultural institutions and reject funding from the Israeli government.

Interviewing the movement's co-founder Omar Barghouti a couple of years back, I was struck by a vision that Palestine could never be liberated without an international movement for justice and equality winning the global war for racial, indigenous, gender, economic and environmental justice. He raised his concerns about rising antisemitism in the West and emphasised that the BDS movement was clear from the beginning that it opposes all forms of discrimination, including antisemitism.

The success of BDS has led the Israeli government to spend millions of dollars spreading misinformation that often leads to supporters of BDS and those advocating for Palestinian rights, being accused of antisemitism. The repercussions include the German parliament voting in 2019 to condemn BDS as antisemitism and numerous cancellations and slander of Palestinian artists and their allies in Europe, the UK and the USA. Author Kamila Shamsie, artist Walid Raad, philosopher Achille Mbembe, poet Mohammed el-Kurd, and former director of the Jewish Museum Berlin, Peter Schäfer are all amongst those targeted.

Director Mike Leigh on modern-day McCarthyism of the @SchauspielS, 'systems of silencing and intimidation' when it comes to Palestine, attempts to de platform one of the greatest playwright of our times, Caryl Churchill pic.twitter.com/s56F7HFdHt

Touring Germany with The Freedom Theatre, it struck me how often Germans spoke of their specific responsibility to support Israel due to their country's history. Our team of young Palestinian actors were left confused by the constant insinuation that they must live as refugees, facing death, invasions and imprisonment because of Germany’s horrendous past. Whilst in general, I found Germans better informed of their history than the British, there was still a refusal to engage with the consequences that the establishment and support of Israel had on Palestinians.

It should not be difficult to recognise and condemn the genocidal crimes committed against the Jewish people in Europe, and support the Palestinian struggle for liberation against Israeli colonialism.

As we see a resurgence of the far-right and continued attacks on Jewish people, those of us from the West need to be speaking out against this. The Freedom Theatre and global activists repeatedly emphasise that Israeli crimes should not be conflated with people from the Jewish faith, and that antisemitism harms all.

Caryl Churchill, an incredible playwright whose work I’ve long enjoyed, is targeted in Germany bc she is a patron of Palestine Solidarity Campaign, a supporter of boycotting Israeli apartheid and has written plays on Gaza where all funds go to medical aid for Palestinians. https://t.co/yvq6epB8WM

However, the International Holocaust Remembrance Alliance (IHRA) definition of antisemitism and, in particular, its “contemporary examples” continue to confuse. The definition has been intensely criticised, including by its own author. Most recently, 128 scholars of Jewish history, the Holocaust and antisemitism urged the United Nations not to adopt it, sighting a, “politicised definition that is instrumentalised to deter free speech and to shield the Israeli government from accountability for its actions."

In the UK, multiple drama schools and universities have rightly seen a reckoning on their racist and discriminative practices. However, their adoption of the IHRA definition, has the potential to silence Palestinian voices.

Associate Lecturer at Sheffield Hallam University (SHU) Shahd Abusalama experienced this first-hand when her teaching role was suspended. Abusalama, who also co-founded the dance troupe Hawiyya, was recently targeted in an article alongside The Freedom Theatre, criticising the British Council for funding both company's work.

Attacked in both arts and academia, Abusalama's experiences perfectly sum up how the conversation on Palestine is being shut down in two of the most crucial spaces for learning and critical thinking. Meanwhile, it is hard to know how long the British Council will fund Palestinian organisations if they are repeatedly demonised in the media.

Internationally, hostile governments, visa restrictions, media attacks, and the continued misrepresentation that speaking about Palestinian human rights is antisemitic only adds to the relentless ways that artists are already censored in Palestine.

Only a few weeks ago, Bilal Al-Saadi, Chair of The Freedom Theatre’s Board, was imprisoned without trial. As I wrote this, 17-year-old Mahmoud Al-Sadi, a participant at The Freedom Theatre, was shot and killed by the Israeli army as he walked to school.

What we should learn from Shahd Abusalama's victory

It is another devastating loss, but global allies from all backgrounds and religions help raise the alarm, without which these heinous crimes might go unnoticed internationally. The silencing and cancelling of these allies further isolate Palestinians.

Ranin Odeh, the Child and Youth Co-ordinator at The Freedom Theatre, spoke of her grief after her student Mahmoud was killed, describing him as “the naughty boy” with “a golden heart”.

Her words bring me back to Churchill's Seven Jewish Children and its exploration of families wanting to protect children, the text grappling with the question “Tell her” or “Don't tell her”.

The reality for Ranin, as she leads a children’s workshop during another invasion in Jenin Camp, is that it’s impossible to shelter them. Despite the imminent danger, as the electricity cuts and screams from outside penetrate the dark room, Ranin chooses to continue playing theatre games, uniting the children and breaking their barrier of fear.

Ranin’s determination to face uncomfortable realities, teaches us a lesson in leadership and the value of solidarity, as we brave the many challenges the world faces.

Zoe Lafferty is associate director at The Freedom Theatre in Jenin Refugee Camp, Palestine where she is currently collaborating on the global solidarity project ‘The Revolution’s Promise’ and virtual reality film ‘In A Thousand Silences’.

Muslim women are commodities for cultural and political wars