Palestinian academic Shahd Abusalama was not the first and, unfortunately, will not be the last, to be targeted by smear campaigns. But her victory provides a model for other solidarity campaigns in the future, writes Malia Bouattia. 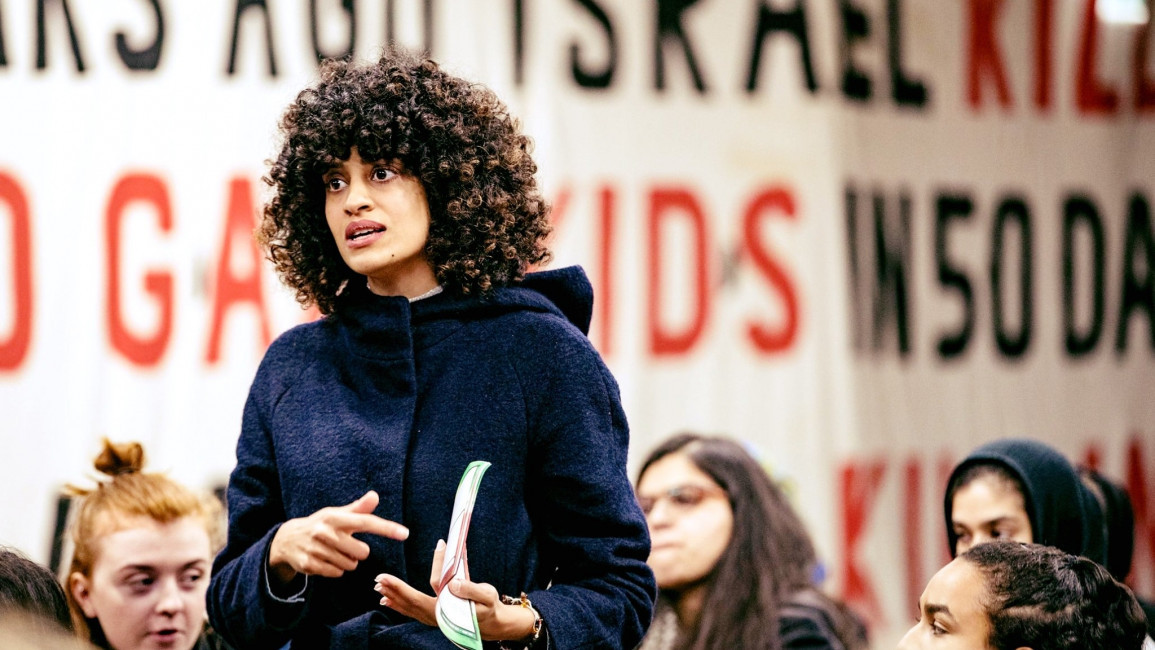 The recent case of Palestinian academic Shahd Abusalama, an Associate Lecturer at Sheffield Hallam University (SHU) who had her teaching suspended following an organised smear campaign by pro-Israeli organisations, is yet another in a series of assaults on academics who express solidarity with Palestine.

A vocal activist within the UK, since her arrival to the country from Gaza in 2013, Abusalama has been a prominent figure in the Palestine solidarity movement. The academic is no stranger to Israeli violence and intimidation. She is a third-generation Palestinian refugee, has lived through Israel's bombardment of Gaza, and continues to live in fear for her family members who remain in the besieged strip. Her father was a political prisoner for 15 years.

Though none of this was either acknowledged or considered in the attacks against her. As a matter of fact, quite the opposite is true. SHU relies on the controversial IHRA working definition of antisemitism, which has been much criticised (not least by its own author) for its uses in attempting to silence criticism of Israel's crimes and Palestine solidarity more widely. Abusalama's targeting is very much in line with this broader process and is to be understood as an outcome of her active role in the movement.

"Abusalama was not the first to be targeted and, unfortunately, she will not be the last. But her victory provides a model for other solidarity campaigns in the future"

Furthermore, not only was she targeted and smeared publicly, but the university caved under the pressure and suspended her teaching and launched an investigation against her. Abusalama was informed the night before she was due to start teaching that there had been a complaint made against her, which had triggered an internal investigation. This, in turn, she was told, meant she could no longer perform her duties. In doing so, the university failed to follow its own internal regulations and offer Abusalama the basic right to due process.

However, following mass pressure from students and staff at SHU – including the local UCU branch which voted not only to support her but to call on the university to drop the investigation as well as the use of the IHRA definition – journalists, artists, academics, political figures, human rights groups and cultural organisations around the world, the university was first forced to reinstate Abusalama's teaching. Now, it has told her that the disciplinary process against her has been terminated and that her employment status at the university will be improved.

This is certainly not a common outcome of attacks of this nature, yet it demonstrates that when organised and well-rooted campaigns hold firm and push back, they can win. Hers is a crucial victory for academic and political freedom on campuses across the UK, as well as for all those who waged the #InSupportofShahd campaign in her defence.

What Abusalama's experience demonstrates also, is that the confidence of those trying to shut down open debate and activism surrounding Palestine keeps growing. Indeed, over the last few years pro-Israel groups and their allies, have done everything they could to detract the attention from Palestine, its people and their suffering at the hands of the state. Israel's actions are increasingly impossible to defend – as the recent Apartheid report from Amnesty International further demonstrates.

Instead, by focusing on highly politicised and weaponised accusations of antisemitism, and conflating the defence of the State of Israel with the struggle against them, pro-Israel activists have largely tried to attack the Palestine movement while shifting the debate away from Palestine.

The IHRA working definition of antisemitism has been a vital tool in achieving this. Anti-Zionism is conflated with antisemitism in the text. Any critique of Israel can then be construed as an attack against Jewish people, and immediately deflected and repressed.

As was very clear in other cases, such as the successful targeting of Professor David Miller by those same groups, leading him to lose his position at Bristol University, the smear campaigns have proved all too successful. This has led them to increase and target wider groups of people, including Abusalama. However, it seems that this time they overstretched.

Abusalama's victory reinforces the need to organise collectively on this issue because it is not likely to go away any time soon. Abusalama was not the first to be targeted and, unfortunately, she will not be the last. But her victory provides a model for other solidarity campaigns in the future. Abusalama herself, her family, and her allies have demonstrated what is possible at a time when so many grow disillusioned by the possibility of fighting back and actually winning.

A number of lessons are crucial here.

First of all, the model of taking attacks on a case-by-case basis is unsustainable. All of these attacks operate in the same way and have the same goal: to destabilise, discredit, and disorganise the Palestine solidarity movement. They should be treated that way. Abusalama’s campaign did not enter the logic of apologies and trying to demonstrate her good character. Instead, it named the situation precisely and identified the political nature of the assault against her.

Secondly, a vibrant network rallied around her. While artists and public figures spread the news on social media, legal advisors from the European Legal Support Center (ELSC) and trade union activists developed a careful plan on how to respond to the university's actions and challenge both its processes and the allegations against Abusalama. At the same time, students mobilised on campus, and countless others inundated the university management’s inboxes with letters of support. In addition, the union branch passed a motion of support and called on the university to reverse course – both in terms of the specific case and in terms of the use of the IHRA working definition more generally.

"The target, in a sense, matters little. The politics of the process of repression are of real importance"

Finally, Abusalama's victory also points to an organisational need to set up a national network that can replicate this approach across the board, every time another Palestine solidarity campaigner is targeted by pro-Israeli organisations. This would undermine the fragmentation that these attacks generate and avoid the mistakes of the past, in which people pick and choose who to rally around. Not to mention that such a network would relieve the overwhelming sense of isolation that those in the eye of the storm face during these periods of overwhelming pressure and uncertainty.

The target, in a sense, matters little. The politics of the process of repression are of real importance.

The only way to respond to what is an organised and well-oiled system of repression of Palestine activists is by highlighting that this is exactly what they are and taking them on collectively. We cannot afford to leave anyone behind because it is the civil liberties, academic freedoms and freedom of speech of all of us that are being undermined each and every time.

Malia Bouattia is an activist, a former president of the National Union of Students, and co-founder of the Students not Suspects/Educators not Informants Network.

Opinions expressed here are the author's own, and do not necessarily reflect those of The New Arab and its editorial board or staff.