Images of far-right rioters violently storming the capitol building on 6 January 2021, shocked the world and reinforced the rampant racism that grew during Trump’s term. 2 years on under Biden, little has changed in the US, writes Richard Sudan. 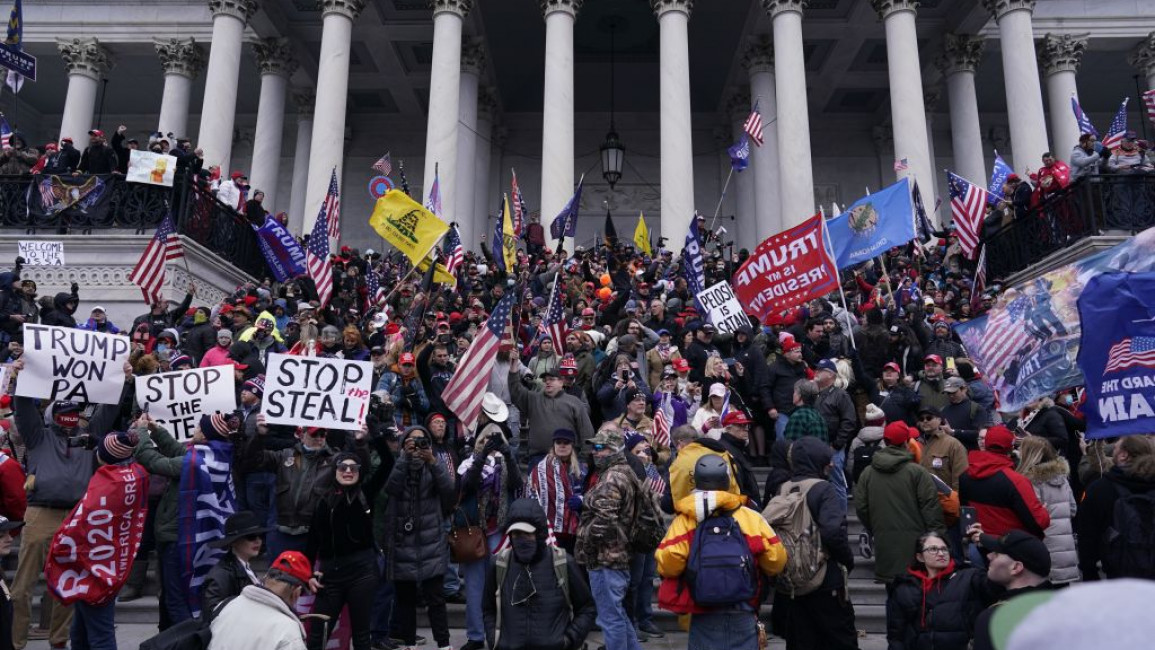 Riots in Capitol Hill which followed Trump's claims of election fraud and protestors attempted to overturn the results before Congress finalised them in a joint session of the 117th Congress on 6 January, 2021 in Washington, DC. [GETTY]

On 6 January 2021, the chickens finally came home to roost.

For those in denial, the privileged, and the wilfully ignorant, the wrath of white supremacist violence and vigilantism finally and undeniably reared its ugly head in the nation’s capital following Donald Trump’s re-election defeat. Encouraged by the former US president, people quite literally took to breaching and smashing the very walls at the heart of the country’s democracy when they targeted Washington’s Capitol building. Five people died as a result of these events.

White mob violence however, is not a new phenomenon for those communities that built and sustain America; black people have been living through the daily nightmare of white supremacist terror ever since the country’s inception. Indeed the lynching of black people remains an American pastime from the days of slavery and Jim Crow, through to the present day.

''If the Capitol riots sounded the alarm bell about the real and present danger posed by unchecked white supremacy in America, then decent people all across the country must demand a political leadership ready to act on such warning signs to avert further chaos.''

For those living comfortable lives however, often in perceived to be more ‘enlightened’ parts of the US, the Capitol Hill riots represented something different. To this group, the large crowd was an entirely new and terrifying prospect.

No longer could white supremacy be neatly tucked into the bracket of fringe extremism or reduced to a ‘few bad apples’. The overwhelmingly white mob which stormed the capitol was a broad church of blue and white collar workers. Groups like the Proud Boys and the Oath Keepers, that were present, often have direct links to law enforcement.

Many people believed white supremacy would be grabbed by the scruff of the neck by Joe Biden taking office and frog marched out of the White House along with Donald Trump. While this might be a tempting narrative for some to entertain, especially by the liberal media, nothing could be further from the truth.

Indeed, white supremacy is America in the sense that it was the founding ideology at the genesis of the nation paving the way for ethnic cleansing and genocide. It was the justification for killing millions of native Americans and forcing black people to essentially build a new nation atop of an indigenous graveyard.

The cold reality is that as we mark the 2nd anniversary of the storming of Capitol Hill, the factors which caused it remain in place. Biden promised to tackle “structural racism” during his first speech to Congress, but he has failed to use his power to move the dial even an inch.

Rather than tackle the problems of racism within law enforcement that sees black people disproportionately killed at the hands of the police, for example, the US president has been throwing more money at the institution which remains cloaked in layers of protection, including qualified immunity.

According to the non-profit, Mapping Police Violence, 2022 was a record year for deadly US policing, with 1,176 people dying at the hands of law enforcement.  According to the data there were only 12 days last year in which no one died as a result of police action.

When we think about the number of white vigilante killers who seem to be armed but alive when arrested by the police, compared to the continual stream of unarmed black people dying in the news, such data reinforces what we all instinctively know.

And of course, white vigilantism and rogue racist policing are inextricably intertwined in the US.

Mass shootings continue to occur so frequently that we are practically accustomed to seeing them on the news. Not to mention, the vigilante shooters always seem to fit the same demographic of being young white men, angry at the system and an ever growing multi-racial society.

Of course, there are many more points which support the argument that under Biden, white supremacy and the mob violence which led to the Capitol riots is still in full swing. The rejection of critical race theory, and the fragility of white guilt, racist patrols allowed to run amok at the border green-lighted by a president hell bent on appeasing those who view America as a white nation under threat from 'the other', are but a few.

After all, why else would Biden continue the use of Title 42 to expel non-white migrants, after promising to end the Trump era policy while openly courting Ukrainian refugees for political grandstanding?

6 January 2021 was not the culmination of America’s love affair with racism, but was itself a warning sign of much worse to come if the country does not get to grips with the ghosts of its past and chart a new radical course which will genuinely tackle racism. Joe Biden has pushed no meaningful change in this regard, while the George Floyd Justice in Policing Act – a small ray of hope that people have long fought for to address structural issues within US law enforcement– has stalled entirely.

Recently, and alarmingly, a poll found that 40% of Americans think civil war within a decade is likely.

If the Capitol riots sounded the alarm bell about the real and present danger posed by unchecked white supremacy in America, then decent people all across the country must demand a political leadership ready to act on such warning signs to avert further chaos.

Marking the 2 year anniversary of the events in Washington demands more than speeches from politicians and rhetoric about “lessons learned”. The political will and muscle is desperately needed like never before, to act and build bipartisan consensus to offer something better for the future. Otherwise, history will simply repeat itself and racialised communities will be doomed to pay the price, some with their lives.

Richard Sudan
Recent Articles
We need to talk about Jesus' ‘blackness’
21 Dec 2022
Is it too late for comedian Baddiel’s apology over racism?
09 Dec 2022
Labour's failure to tackle racism could cost them long-term
25 Nov 2022
Reparations for slavery: US government, pay up!
13 Nov 2022
View More
More in Opinion

Delaying justice for Grenfell puts all British homes at risk