Palestinians brace for a bloody 2023 as violent Israeli raids continue

Palestinians brace for a bloody 2023 as violent Israeli raids continue
MENA
9 min read
Qassam Muaddi
West Bank
"The leaders of the Israeli right seem to consider that the time has come for a new large-scale attack on Palestinians, which in the current conditions translate into an escalation of raids," noted Razi Nabulsi. 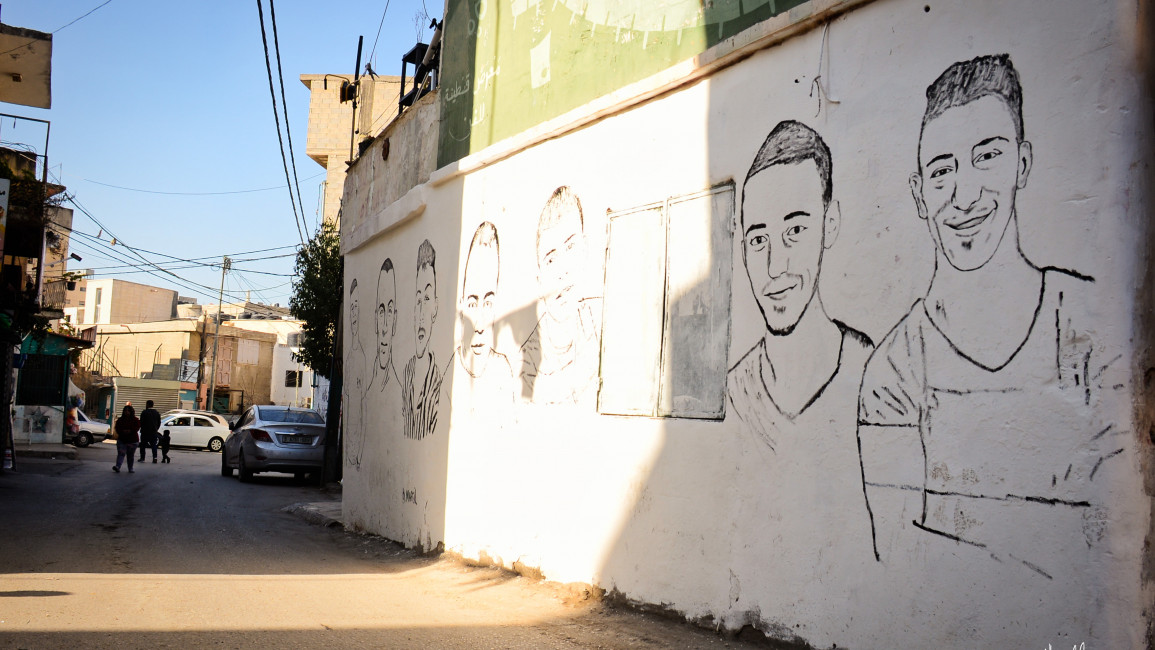 Israeli military raids on Palestinian communities have continued to escalate in magnitude and violence during the first month of 2023, said Palestinians in different parts of the occupied West Bank.

Since the beginning of 2023, Israeli forces have escalated their military raids into the Palestinian cities, towns and refugee camps in the occupied West Bank, often confronted by young Palestinians. In various areas, Palestinians began to confront Israeli raids with firearms, especially in the northern occupied West Bank.

The Israeli escalation claimed the lives of some 230 Palestinians throughout 2022, including 53 victims of Israel's war on the Gaza Strip in August.

Israeli forces have already killed 18 Palestinians since the beginning of January, 15 of whom were killed during Israeli raids. Of the remaining three Palestinians killed, one was killed at an Israeli checkpoint, another after allegedly trying to stab Israeli soldiers near Hebron, and another at a settlement output in his home village, allegedly trying to attack an Israeli settler.

"The occupation forces increased their raids on all of Nablus during the last year," Ameen Abu Wardeh, a Palestinian journalist based in Nablus, told The New Arab. "Before, [the Israeli] raids were limited to the western part of the city to escort settlers to the Joseph Tomb religious site."

"During the last year, the occupation forces raided deep inside the old city in large numbers and killed Palestinians in broad daylight in the middle of Nablus' commercial area," noted Abu Wardeh.

"Even raids into the Joseph tomb became more frequent and more violent, [and] killing young people during every raid," he added.

"The new year began with small raids into Joseph's Tomb, but left dozens injured by bullets and tear gas, which has become the norm in Nablus by now," Abu Wardeh added. "People in Nablus are worried, always bracing for the next raid and the next person to be killed."

In October, the Israeli army imposed a three-week-long siege on Nablus, accompanied by raids targeting the leaders of local fighters, especially after the rise of the "Lions' Den" armed group, which continues to entrench itself inside Nablus' old city.

The area most targeted by Israeli raids during the last year is Jenin, located in the north of the occupied West Bank.

"Residents in Jenin have become used to raids, as they always follow short periods of calm that last only a few days," Najat Abu Butmeh, director of the women's and children centre of the Jenin Refugee camp, said to TNA.

"We lost more than 40 people to Israeli raids in 2022, most of them young, and residents of the Jenin refugee camp continue to have their lives rhythmed by the occupation's raids," said Abu Butmeh.

"I, for example, go to the centre every morning expecting to close for the day, because if there is a raid, it's too dangerous for children to come, especially when the occupation's drones fly over the city for several days, because it means that there is a new raid coming soon," she added.

Photos from the funeral of Palestinian teacher Jawad Bawaqna and young man Adham Jabareen, who were murdered by Israeli occupation forces during a military raid into Jenin camp. pic.twitter.com/sFc5Ye7eyL

The Israeli violence in Jenin began shortly after the Gilboa prison break in September 2021, when two of the Palestinians who escaped the Israeli high-security prison were captured in the city.

By the beginning of the year, Israeli raids had become an almost daily occurrence in all of the northern West Bank, as Palestinian young men began to confront them with firearms.

Israel's violence soon spread to other parts of the occupied West Bank, including the countryside of Ramallah, which hosts the administrative centre of the Palestinian Authority.

The most targeted Palestinian community by Israeli raids in the Ramallah region has been the town of Silwad, east of the city.

"In Silwad, the occupation's raids are not only becoming more frequent but also more violent," Shatha Hammad, a local journalist and resident of Silwad, said to TNA.

"Occupation forces have used physical force against residents during home raids multiple times, and on one occasion, they used land missiles against a residential building to force a wanted Palestinian out," she said.

A video shows the moment when a #Palestinian man was shot and injured by Israeli occupation soldiers during an overnight military raid into Jenin refugee camp, this morning. pic.twitter.com/BaaZgus8GM

"By the middle of 2022, young men in Silwad began to confront the occupation raids with guns, influenced by the example of Jenin and Nablus, and the occupation's raids became even more violent, shooting and killing young people inside the town during raids," Hammad pointed out.

By the end of August, Israeli forces imposed a closure on Silwad for more than 10 days, cutting main roads for the entire east Ramallah area of some 12 villages.

"This year began with very few raids, but the occupation forces continuously impose checkpoints at the town's entrance with soldiers using violence against Palestinians, even killing one man a week ago," she added.

In mid-January, Israeli forces killed 45-year-old Ahma Kahala from the neighbouring village of Rammoun at a military checkpoint at the entrance of Silwad as he drove to work with his 20-year-old son. Israeli forces first claimed that Khala tried to stab a soldier but soon admitted that he had posed no danger before being killed.

"People in Silwad brace for more raids, as tensions are still high," said Hammad. "With the killing of Ahmed Kahala at the entrance of the town, residents worry that the occupation is willing to continue raids as last year."

Israeli forces have detained more than 40 Palestinians from the occupied West Bank overnight, including one who died of wounds sustained during an Israeli raid to Jaba’ southwest of Jenin; 30 of those detained are from Silwad, east of Ramallah. This is what occupation looks like: pic.twitter.com/KcbckY7uVP

In the southern West Bank, the refugee camp of Dheisheh in Bethlehem has been the target of increased Israeli raids since last year.

The camp lost three young men in 2022, two of whom were killed during Israeli raids, and about a dozen more were arrested. Since the beginning of January, two teenagers in Dheisheh have already been killed in Israeli raids.

"The occupation forces have made it a norm to raid Dheisheh every week, and people in the camp brace for the next raid as Tuesday approaches," Mohammad Abu Ayash, a resident of Dheisheh and friend of two of the killed youngsters, told TNA.

"Young men in the camp have always confronted the occupation raids, who have always used fire against them," added Abu Ayash. "But until last year, soldiers used to shoot at limbs and knees. From mid-2022 they began to shoot at heads and chests during raids."

In early January Israeli forces killed 14-year-old Adam Ayyad during a raid in Dheisheh. Twelve days later, another Israeli raid killed 15-year-old Amru Khmour. Both teenagers were confronting raiding forces with stones, and they both carried farewell letters in their pockets.

"More youth in the camp are writing their farewell letters and carrying them with them because they expect an Israeli raid at any moment," said Abu Ayash. "In one classroom, a teacher searched middle-school children and found 14 farewell letters, which is a very worrying situation."

"Every death in Dheisheh, impacts the entire camp, socially and psychologically, especially when the victim is young,"  Abu Ayash added. "Israeli raids have stricken the population in Dheisheh harshly, and people are worried that they will continue."

This was the will found in the pocket of Amr al-Khmour, 14, who was murdered in Dheisheh on Monday.

"I wanted to do so many things. I wanted to send a message to all the residents of our beloved camp, Dheisheh. Don’t leave my mother alone. I hope that everyone will forgive me. pic.twitter.com/fM6vY2anvB

Throughout 2022, the Palestinian Authority repeatedly called upon the international community to provide international protection for Palestinians. For human rights groups, Israeli raids have a political reason.

"Israel seeks to break down any Palestinian attempt to oppose or counter its occupation of the West Bank, no matter the form that such opposition takes," Tahseen Alian, a senior researcher at the Palestinian human rights group Al-Haq, said to TNA.

"Israeli raids haven't been limited to communities where Palestinians confront Israeli forces with stones or guns, but they have also raided the offices of human rights organisations like us because we expose Israeli violations," he stressed.

"The silence and lack of action by the international community towards Israel's actions have provided Israel with a sense of impunity that makes its leaders feel that they can take advantage to escalate repression against Palestinians," he remarked.

For observers, the violent escalation by Israel is also linked to its internal political changes, especially the rise of religious and extremist right-wing groups to power.

"For the Israeli religious right wing, there are two important issues on the political agenda: the first is the final annexation of the West Bank, for which it needs to kill any possibility of new negotiations; the second is changing the status quo at Al-Aqsa mosque, for which it needs to maintain Palestinians submitted and unable to react," said Razi Nabulsi, Academic and researcher in Israeli affairs, to TNA.

"The leaders of the Israeli right seem to consider that the time has come for a new large-scale attack on Palestinians, which in the current conditions translate into an escalation of raids," Nabulsi further noted.

"The rise in power of this religious right-wing in Israel and its hegemony over Israeli politics in recent years has empowered Israeli leaders to unleash military repression on Palestinians," he added. "As long as these conditions remain, the escalation of Israeli in the West Bank is not likely to stop in the coming months."