Ben-Gvir's storming of Al-Aqsa Mosque Compound puts pressure on Gaza to respond
MENA
4 min read
Sally Ibrahim
Gaza
Contrary to what Palestinians in Gaza wish to live in calm in 2023, the provocative storming by the Israeli National Security Minister Itamar Ben-Gvir of the Al-Aqsa Mosque Compound may force a military response from the besieged coastal enclave. 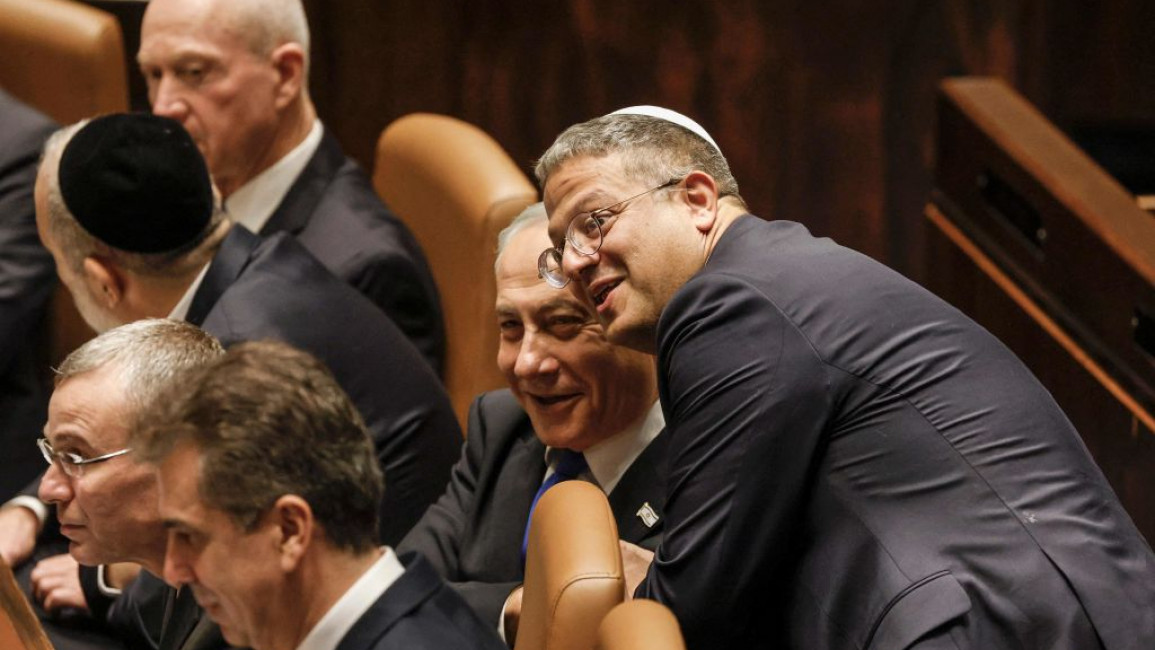 Contrary to what Palestinians in Gaza hope would be a calm new year, the provocative entry of the Israeli National Security Minister Itamar Ben-Gvir into the Al-Aqsa Mosque may force a military response from the besieged coastal enclave.

Earlier on 3 January, the far-right politician, who will oversee the police in the new Israeli government, stormed the Al-Aqsa Mosque Compound, under the protection of Israeli security forces, in occupied Jerusalem. The mosque is considered one of the holiest sites for Palestinians and Muslims.

The visit of the leader of an ultranationalist Jewish Power party, who was previously convicted of incitement to racism and supporting a terrorist organisation, was the first act since he took his place in Benjamine Netanyahu’s government a few days ago.

"Such provocative actions can lead to an explosive situation in the Gaza Strip as the resistance of all factions will not remain silent and will use their own right to defend our holy places and people," Hazem Qassem, spokesperson of the Islamic Hamas movement in Gaza, said to The New Arab.

"We are facing the most extreme and fascist Israeli government that does not recognize the existence of Palestinians, Muslims, or even Arabs," Qassem said.

Nevertheless, he adds, "our Palestinian people will defend their rights by fighting their enemy to protect their existence over their own lands as well as liberating their holy Muslim places, mainly Al-Aqsa Mosque, from the Israeli occupation."

"Simply, our battle against the Israeli occupation will not stop until the final victory of our people and the expulsion of the occupier from our entire land," the spokesperson stressed.

For its part, the Palestinian Islamic Jihad movement (PIJ), said that Ben-Gvir's provocations will escalate the situation in the coastal enclave in the near future.

Speaking to TNA, Daoud Shihab, spokesman of PIJ, said, "The so-called Israeli minister insists on violating our holy places based on his racist and radical ideology … His actions are aggression against the Palestinian people, Arabs, and all Muslims."

"Ben-Gvir does not represent himself, but rather represents a fascist government that clearly declares war on our Palestinian people," Shihab said. "His government bears the responsibility for pushing the situation towards explosion and confrontation that would erupt in the area."

Last Thursday, Israel's hawkish veteran Benjamin Netanyahu was sworn in as prime minister after a stint in opposition, at the head of what analysts call the most right-wing government in the country's history.

Netanyahu, 73, who is fighting corruption charges in court, had already served as premier longer than anyone in Israeli history, leading the country from 1996-1999 and 2009-2021.

Netanyahu's sixth government is considered the most right-wing administration in Israel's history. It includes Itamar Ben-Gvir's Jewish Power party as a minister of national security with powers over the police, which also operates in the territory occupied by Israel since 1967.

Both Smotrich and Ben-Gvir have a history of inflammatory remarks about Palestinians.

Speaking separately to TNA, Gaza-based analysts warned that "the current radical and the racist Israeli government has the ability to return Gaza to the military escalation circle as the armed Palestinian factions will be in front of more and more provocative policies and actions that will be adopted by the Israeli leaders."

"If Netanyahu's government implements its promises of annexing the lands in the occupied West Bank and imposing its controlling on Al-Aqsa Mosque and Jerusalem, absolutely the Palestinian resistance in Gaza will escalate the situation against Israel," Hussam al-Dajani, a Gaza-based political analyst, said to TNA.

Israel knows that the armed factions in Gaza have their 'red lines,' and if it violates such lines, the Palestinian fighters will do their best to punish Israel even if they will involve in a new round of military war, according to Mustafa Ibrahim, another Gaza-based analyst.

"Israel will try hard to maintain calm in Gaza and keep it neutral from what is happening in Jerusalem and the West Bank," Ibrahim said. "But the fighters in Gaza are ready for any emergency."