Public Freedoms in the Islamic State: Rached Ghannouchi's newly translated manifesto for a political, public Islam
Book Club
5 min read
Usman Butt
Book Club: As Tunisia descends deeper into Kais Saied's dictatorship, David L Johnson's translation of Ennahda leader Rached Ghannouchi's 1993 manifesto for a modern, reformist Islam is a stark reminder of what Tunisia was versus what it now is. 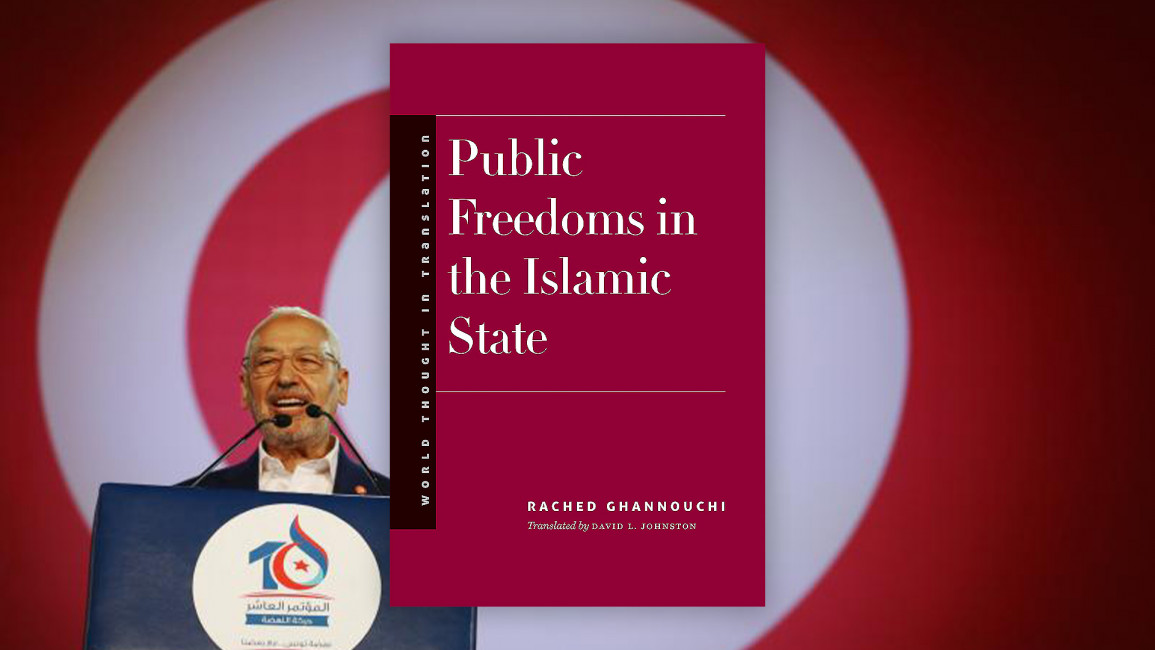 “Freedom and human rights in Islam are not slogans imposed by external pressures or power equations; they are convictions and religious principles that are taught from childhood,” argues the leader of Tunisia’s Ennahda party Rached Ghannouchi in the newly translated book Public Freedoms in the Islamic State.

A victim of repression at home with stints in prison for his activism, the questions at the heart of the book are of great personal concern to Ghannouchi as well as great concern to Tunisia as a whole.

This excellent translation by David L Johnson makes for a powerful read.

At the heart of Ghannouchi's contention is that the Universal Declaration of Human Rights (UDHR) should not be seen as a foreign and alien concept to Islamic law and theology. Indeed, an authentic reading of Islam’s sacred texts and judicial practices aligns with human rights, democracy and freedom, the Ennahda leader argues.

Public Freedoms does not argue everything about the Universal Declaration of Human Rights maps perfectly to Islamic concepts and political theology. There are two important areas of difference from the western conception, the first is epistemic origins and the second is scope.

The origins of UDHR are rooted in European natural law traditions during the enlightenment period, where the human individual is reasonable, independent and sovereign and religion is irrelevant.

This philosophical point has alienated some Muslims, but Ghannouchi puts forward the case that while this is a flaw, it is of secondary importance as the broad tenets of UDHR align with Islamic principles.

To understand Islam’s commitment to rights, we must start with God’s relationship to humanity and how the knowledge and worship of God drive the Muslim individual to want to reflect divine wisdom in all areas of life.

Shariah is the attempt to realise this through ethics, morals and public law. The problem of epistemic origins leads Ghannouchi to his second problem with UDHR, which, compared to Shariah conception of human rights, is much more limited than what Islamic law offers.

UDHR stresses the importance of freedom of speech, consciousness, movement and association, while Islam goes much further than this and includes economic rights and social duties (taking care of the poor and sick etc…) too.

Freedom of consciousness and opposition to oppression is a central principle in Ghannouchi's thought, as he argues, “Religion is not secure unless persecution is driven away.” The Quran's declaration that there be no compulsion in religion is the starting point for freedom of belief.

Public Freedoms offers a detailed examination of the issue of apostasy, which according to some interpretations is punishable by death.

After dissecting theological and historical evidence, Ghannouchi concludes that this is an erroneous claim and that for medieval jurists, apostasy had a specific meaning  To the medievals, apostasy referred to a violent insurrection or armed rebellion against the social and political community and in this context jurists sanctioned death for those who instigated it, individuals and their beliefs did not fall under these sanctions.

In other words, apostasy was a political/criminal rather than religious category, thus there is no clash between liberty and Islamic theology in this matter.

At the core of freedom according to Ghannouchi is democracy, while noting some of the issues with democratisation in the West, nonetheless, democracy plays an important role in creating popular participation in governance and attempts to curb the human tendency towards authoritarianism.

In the absence of an Islamic state and democracy in the Muslim world, Ghannouchi asserts, western democracy is better for Muslims than the authoritarian political orders in Muslim-majority countries. “Democracy, as practised in the West, remains the best, or least bad, system available, and a legitimate demand for a Muslim to make and to join with other free citizens in the struggle to attain it, for to achieve something imperfect and then to improve it is better than to lack it altogether.”

Public Freedoms, like with the case of UDHR, lays out what an Islamic conception of democracy would look like and its critiques of Western democracy are similar to the book’s critiques of UDHR, namely it’s too limited.

Public Freedoms in the Islamic State does have its drawbacks, especially with regard to history, as it treats pre-modern Muslim law as guided by Shariah alone or the core legal governing principle. This was not the case. Indeed, the pre-modern legal landscape was more pluralistic than that and depending on the time and place, Shariah was rarely the dominant state public law system.

Although Ghannouchi correctly points out that the birth of modern political systems in the Arab World that led to the authoritarian political structures came about during and after the European colonial era. But these concerns are of secondary importance, what really matters is what the book is advocating for and making the case for.

A feminist exploration into the five pillars of Islam

Public Freedoms in the Islamic State provides fascinating and detailed insight into the ideas of one of Tunisia’s most important political figures.

It also offers readers a new way of thinking about the relationship between Islam, democracy and human rights through the prism of theo-politics as understood by an active political figure.

The importance of this perspective cannot be overstated. It also offers an important critique of a lot of Islamist thought that seeks to reject things like democracy, women’s rights and human rights. Islam has a lot to offer the human rights discourse for both Muslims and non-Muslims and Public Freedom is an important intervention designed to demonstrate this.