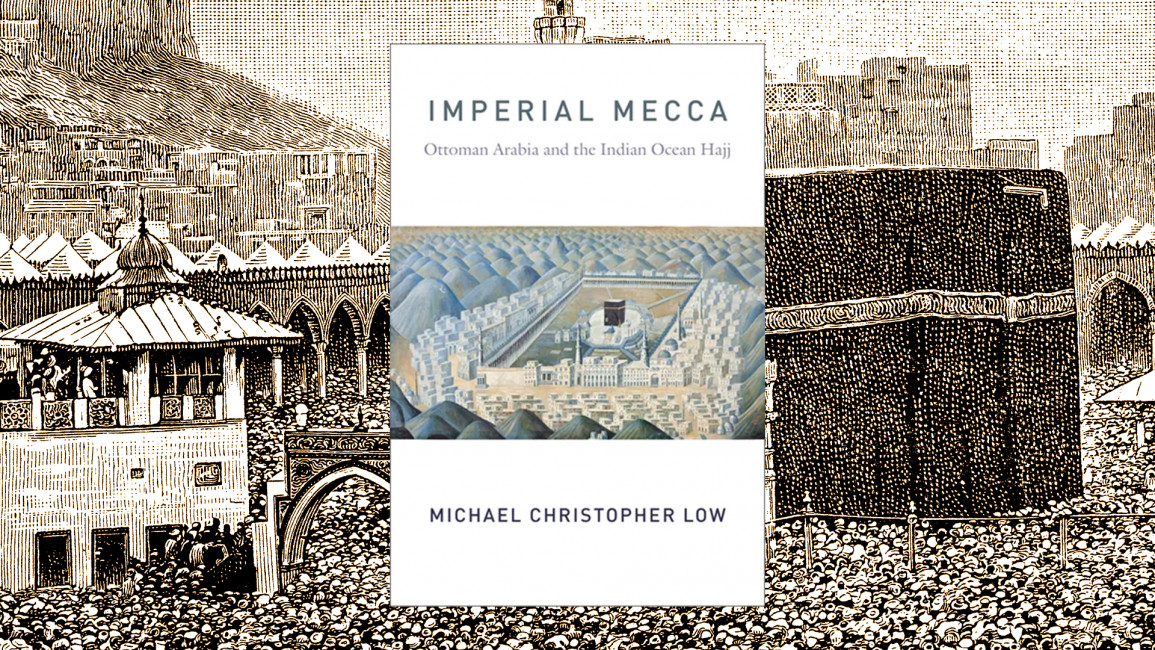 The Hajj is a nebulous concept to those outside the Muslim faith. However, to the Muslim soul, it evokes inexplicable fondness for a cathartic journey in a faraway land.

For the global Muslim community, the Hajj transports body and heart to an austere past, dissolving transient and materialistic realities to connect to the Divine.

Therefore, considering the Hajj a volatile stage for legal, epidemiological, and imperial battles is almost inconceivable. Nevertheless, this is precisely what Imperial Mecca by Michael Christopher Low claims.

It is an intimate and riveting account of how two imperial powers, the Ottoman Caliphate and the British Empire, cross paths across the 19th-century Hajj while navigating the implications of the industrial revolution, cholera pandemics, and Islamophobic colonial incentives.

"Imperial Mecca dimly reflects how the Anglo-Ottoman struggles for legitimacy in the 19th century transcend into our contemporary woes. Concerns over public health were simply an ambiguous and convenient cover to maintain the presumed threats of Muslim mobility"

Despite and because of its revered spiritual significance across the Muslim world, these two empires have fought to manipulate the Hajj and the semi-autonomous Hijaz region to assert their influence and hidden motives.

With the rise of European imperialism and colonial rule across the Muslim world, the Ottoman Empire struggled to maintain its tenuous hold both as an Imperial empire and as a spiritual authority over the Haramain (Mecca and Medina).

For the British, the Hajj initially represented a hub where anti-colonial and pan-Islamic ideas flourished and, thus, presented a security risk to colonial interests. Further complicated by the rise of the steamship era of Hajj and the spread of cholera, Muslim pilgrims across the Indian ocean became pawns, victims, and spies in this international game of espionage, legitimacy, and military struggles.

Imperial Mecca is a product of nearly 15 years of research. It presents a complex history that echoes so much of the modern grief and anxiety found in the ominous events of the Covid-19 pandemic and of Islamophobic sentiments that persist.

The book is interwoven with salient political events, touching on the international sanitation and hygiene concerns involving the Hajj and cholera and techno-politics as the railway, telegraph lines, and steamships began to dominate life and travel. However, remarkably, the minutiae of individual actions and motives are not lost.

The personal stories of diverse prominent and obscure figures involved in the Hajj find themselves throughout this detailed account, making for a very humane and despondent read.

The book is divided into three sections that ask how European imperialism, the advent of steamship transport, and the increasingly interconnected nature of the Muslim world changed the traditional complexion of Ottoman pilgrimage administration.

The first part addresses Ottoman sovereignty and their traditional practices of semi-autonomous control over the Sharifate of Mecca and the Hijaz while contending with questions of the British authority over its Muslim colonial subjects and pilgrims.

The second part investigates the seemingly perennial waves of cholera and plague across India and the British government’s inaptitude of British India’s public health and environmental management.

Low vividly evaluates how cholera, quarantine regulations, urban sanitation, and innovative water infrastructures created a unique and intricate framework for the Ottoman Empire’s control over the Hajj. The final part concludes with the results of the steam age mobility, including border control, passports, and more.

The Devil's Dance: A major landmark in Uzbek literature

Low was inspired by the frustrations of recognizing that a significant portion of the history we know is taken from European colonial archives, and so he endeavours to reveal a more nuanced and dynamic historical account of Ottoman, Indian Ocean, and Hajj history.

Moreover, many sources regarding the Hajj are seen through the eyes of wonderstruck pilgrims and their profound spiritual transformations, overlooking the bureaucratic battles waged under the guise of the Hajj administration for public health and safety.

The behemoth British Empire is known for colonizing much of the world, yet their elusive attempts to colonize the Hajj are seldom studied. As we all know, the Hajj is the most sacred site for Muslims.

Due to its respected status in the hearts of Muslim colonial subjects and Muslim Ottoman citizens, both empires recognized that attempting to seize complete control of the region would be inflammatory. They also understood that authority over the emotive pilgrimage was a means of gaining political legitimacy in the eyes of their Muslim subjects.

This paradox produced a series of mismanagement, duplicity, and preventable casualties throughout the 19th-century pilgrimages. Low argues that the steamship-era Hajj was the first global crisis of Muslim mass mobility.

To Britain, the Hajj was a “twin infection of sanitary and security risks”. They swiftly claimed benevolence in their interference to protect their imperial interests.

As aforementioned, they viewed the Hajj as a global axis for exchanging anti-colonial ideas and a catalyst for cholera, both of which were calculated and misguided assertions. Concurrently, the Ottoman Empire remained wary of Indian Muslims in the Hijaz because they had legal protection as British subjects and, thus, were potential spies.

While Muslim pilgrims continued to cause ill-founded misgivings from both powers, cholera raged on. The Ottomans attempted various quarantine methods per germ theory and sanitation advances.

However, British India remained a staunch supporter of anti-germ and pro-miasma theories. They repeatedly denied that India was the true source of cholera to maintain their Imperial rule, despite the scientific and global consensus that it was.

Not only did Britain obstruct international and Ottoman efforts to contain cholera,  the poor sanitary conditions and lack of hygiene infrastructure, and political hierarchy in the Hijaz contributed to the millions of pilgrims who succumbed to cholera and imperialism over the century.

Between the Ottomans and the Entente

In the end, the Sharif and bedouins of the Hijaz, through their monopoly of Hajj services, and qualms over colonial meddlings, restricted both competing powers of their authority over the Hajj. Instead, the face of Hajj administration was permanently altered, leaving a legacy of Islamophobic fears born from colonial narratives.

Imperial Mecca dimly reflects how the Anglo-Ottoman struggles for legitimacy in the 19th century transcend into our contemporary woes.  Concerns over public health were simply an ambiguous and convenient cover to maintain the presumed threats of Muslim mobility. Low concludes that the Hajj continues to be feared as a potential vehicle for spreading contagious and subversive ideas.

He contemplates the many public health scares we have witnessed throughout the decades, including swine flu, ebola, and coronavirus, and how it has made way for the notion that the Hajj remains the most uniquely dangerous mode of travel and a threat to global security.

Contemporary Muslim travellers continue to face this scrutiny in our post-9/11 world through “random” searches at airports and terrorism watchlists. These practices are taken from colonial suspicions, and so the welfare of ordinary pilgrims remains entangled in imperial rivalry and western interlopers. He does not demur from the term Islamophobia in this study of the modern Hajj and distinctly unveils the haze over the mirror bridging past and present.

Hajj and the Arts of Pilgrimage