The Devil's Dance: A major landmark in Uzbek literature

The Devil's Dance: A major landmark in Uzbek literature
Book Club
6 min read
Noshin Bokth
Book Club: We weren't meant to read The Devil's Dance. Banned for 27 years, Hamid Ismailov's masterpiece is an account of a floral culture attempting to blossom under the iron fist of dictatorship. We haven't yet read his work in English, until now. 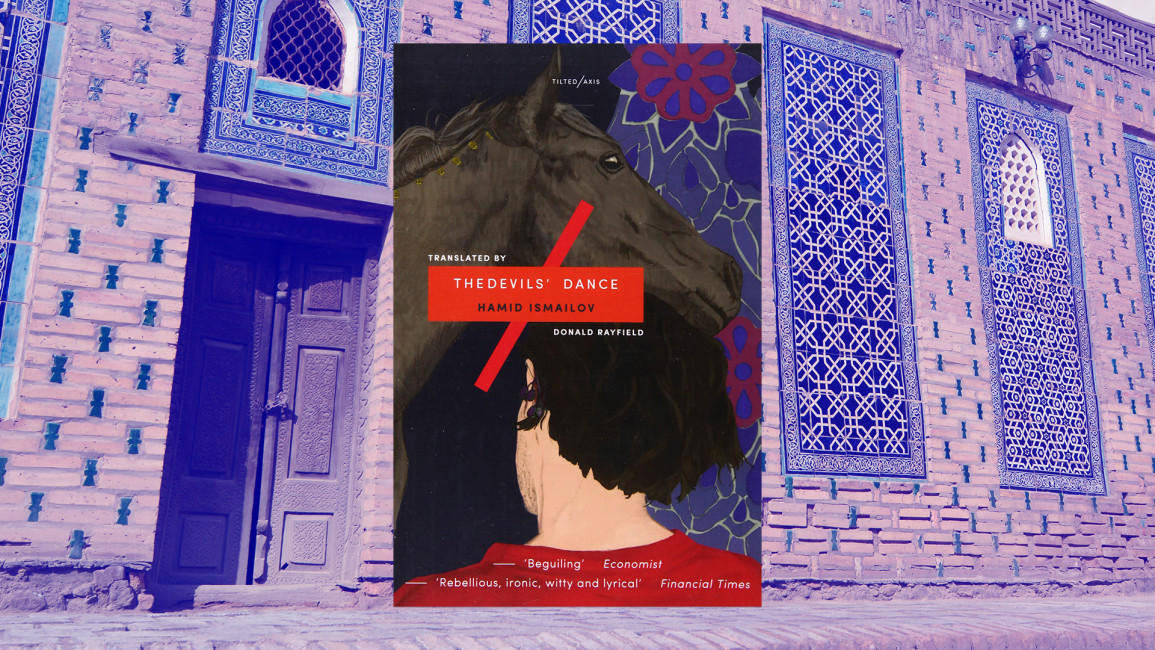 The Devil’s Dance by Hamid Ismailov is the first major Uzbek novel to be translated into English.

It is an evocative lens into a world that is often overlooked and an intricate kaleidoscope of stories, history,  poetry, and human nature. Despite its fictitious premise, the characters and events are true to life from a bygone era.

Ismailov has chosen Abdulla Qodiriy, the real-life prominent Uzbek writer, as the main character of his novel. In 1937, the famous writer proclaimed that he would write a story so beautiful that all his other books would pale in comparison.

He planned to write the novel around the Hellenic woman, Oyxon, who became the wife of three khans. But in the winter of 1937, he was arrested during Stalin's Great Purge, eventually executed, and all his manuscripts burnt.

Thus Qodiriy's story fell into dreams and ashes. That is until Ismailov, Qodiriy's contemporary peer, chose him and his true and imagined stories for a new tale.

The story explores the psyche and imprisoned life of Qodiriy. We get an intimate glimpse into his life in prison and of his fellow prisoners, many of whom are also famed intellectuals.

At the same time, we delve into Qodiriy’s mind to unfold his creative process for writing his lost novel during his brief detention. Since it was never written, this part is artistic conjecture and fiction.

However, the characters that Qodiriy intended to produce were historical rulers and figures. Namely, Nasrullah Khan, Emir of Bukhara, and Madali Khan, Khan of Kokand, notorious critical players in Central Asian history who left behind ruthless legacies. It is, however, Oyxon, the one who had the unfortunate reality of being forced to marry the two khans, who play the most pivotal role in these two converging stories.

Ismailov resurrects them using Qodiriy's mind as a medium producing a delicate tapestry of interwoven ruminations and intrigue.

Despite the ostensibly improbable plights of the characters, the exchanges within Qodiriy's own life and heart, and the tragic stories of his characters echo our modern worlds.

Both Qodiriy and his heroine, Oyxon, suffer from the destruction wrought by the violence of avarice and war with inspiring forbearance. Such experiences are perennial heartaches even today.

Qodiriy's grim jailhouse backdrop with brutal interrogations and succession of executions is a stark contrast with the 19th-century palatial and volatile world of Oyxon.

Ismailov has tactfully managed to parallel and unite such disparate circumstances. Qodiriy’s arrest was under precarious pretences, and his ten-month-long internment resulted in him being another victim of Stalin's Great Purge, an effort to eliminate dissenting members of Stalin's communist party.

Zeina Hashem Beck's 'O': A warming serenade to the cyclical

Unsurprisingly, the claustrophobic and relentless conditions of prison life force Qodiriy to retreat within the inner recesses of his mind. Between the merciless beatings of Stalin's secret police and the discourses with other political prisoners suffering the same fate, we descend into Qodiriy's soliloquy.

In it, he writes the story of the alluring Oyxon, who is subject to rapes and brutality and is essentially a pawn in the games of her ill-famed husbands. While terrorizing Oyxon, Nasrullah and Madali play victim and villain as local and foreign powers wrestle for control over Central Asian lands in what is solemnly known as The Great Game.

Ismailov's dynamic stories traverse far beyond a riveting read and fairy tales. It is a homage to Uzbekistan's language, history, literature, and rich cultural traditions.

He candidly said that he wrote the novel with an Uzbek audience in mind, and its translation is simply a welcome bonus. With that in mind, the use of poetry was inevitable since Uzbek novels are primarily in the form of poetry and have a ubiquitous presence in the rituals of the culture.

Consequently, poetry exhibits its mellifluous voice throughout the novel as it is an inextricable thread of Uzbek tradition. The characters constantly joust in verse, giving a lyrical timbre to the violent scenes that comprise the rest of the novel.

"The translation of this novel reveals a precious fragment of a remarkable country and its history. It reminds us that literature unbinds the elaborate weaving of life to comprehend it, not so idiosyncratic as to how an engineer would dismantle and analyse a broken radio"

But poetry is not the only form of art lauded in Uzbek culture. Literature plays a central role throughout the centuries and in this novel in particular. We see the writer's role in Qodiriy's subconscious as he plots the chronicles of Oyxon.

It is an intricate intellectual dance as he engages in a back-and-forth of adding and deleting details shaped by his encounters and ancestral history. There could not be a more apt tribute to the mental labour that produces such extraordinary works of literature.

Moreover, when Qodiriy regains consciousness, he engages in profound conversations with the political prisoners, Fitrat and Cho'lpon, two famous Uzbek writers. They are his prison mates, and together they lament over the state of their country and take solace and pride in the vibrance of their developing the Uzbek language.

With Stalin's Great Purge and the Great Game as the stage, The Devil's Dance allows us to witness the interplay of multifarious worlds and individuals.

The devilish face that appears when power is in question and life is in peril is not a past phenomenon. Domestic violence forced marriages, and the persecution of seditious subjects transcend time.

Qodiriy, Oyxon, and Ismailov, an exiled writer himself, are kindred spirits who reveal the complex interplay of human nature that invariably revolves around us. Through them, we learn that our ordinary desires and grievances can bridge the barriers of language and culture.

Thus the translation of this novel reveals a precious fragment of a remarkable country and its history. It reminds us that literature unbinds the elaborate weaving of life to comprehend it, not so idiosyncratic as to how an engineer would dismantle and analyse a broken radio.

Still, as Qodiriy shows us, the writer's task is infinitely arduous, as the wires of life are much more ambiguous. Writers like Ismailov and Qodiriy are imbued with a heavy responsibility to impart the aspirations and apprehensions many of us harbour. Literature and history help us recall that we are all yearning for freedom of expression, security, peace, and companionship.